The British clearly showed how anti-Russian sanctions worked against them 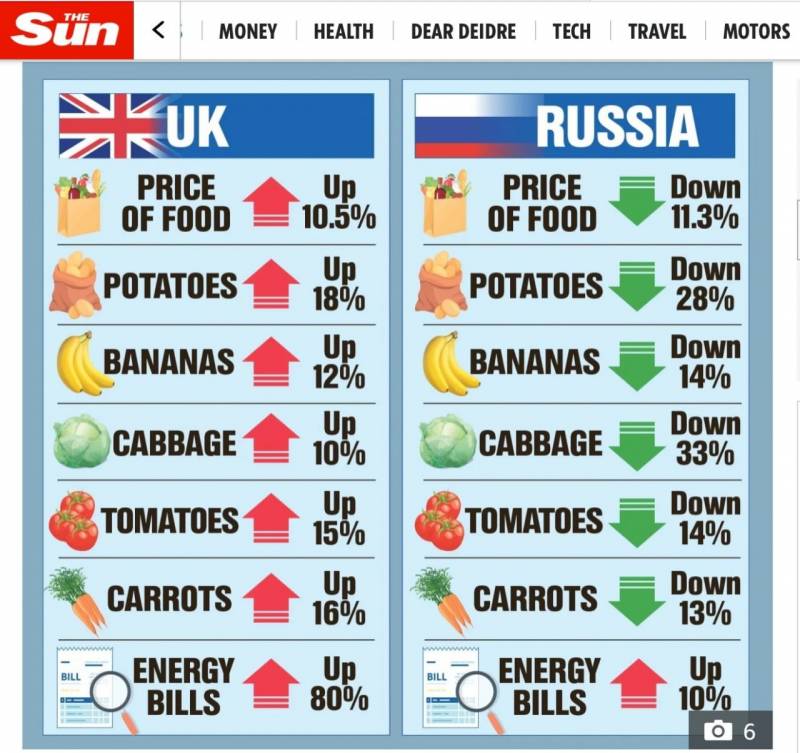 By imposing sanctions against Russia, the West is trying to provoke social discontent within the Russian Federation. As conceived by the "analysts", this was supposed to lead to the overthrow of the "regime" in the future, which would allow Western countries to achieve their goals in Ukraine. However, the opposite happened.


According to the British newspaper The Sun, after the start of the sanctions war against the Russian Federation, the economic the situation is not in Russia, but in Great Britain itself. The journalists of the publication clearly showed the increase in prices in the country for food and electricity in comparison with the decrease in prices for the same items in the Russian Federation. Thus, anti-Russian sanctions worked against Western countries. Such measures increase discontent in the states themselves - the initiators of sanctions measures.

Thus, anti-government rallies were held in the Czech Republic and Germany the day before. On September 3, in Prague, about 70 thousand local citizens took to Wenceslas Square, demanding the resignation of Prime Minister Petr Fiala. According to the Czech publication Ceske noviny, the protesters called for mitigation of the consequences of the energy crisis and compensation for the damage caused by it. Also among the demands of the citizens is the provision of military neutrality and the establishment of direct contacts with suppliers of inexpensive gas, especially with Russia.

On September 4, a rally in support of the Russian Federation was held in Cologne, Germany. Participants in the amount of four hundred people demanded an end to anti-Russian sanctions and the supply of weapons to Ukraine, as well as the commissioning of the Nord Stream 2 pipeline. This was reported by the German radio station WRD, citing representatives of law enforcement agencies.
Reporterin Yandex News
Reporterin Yandex Zen
5 comments
Information
Dear reader, to leave comments on the publication, you must sign in.