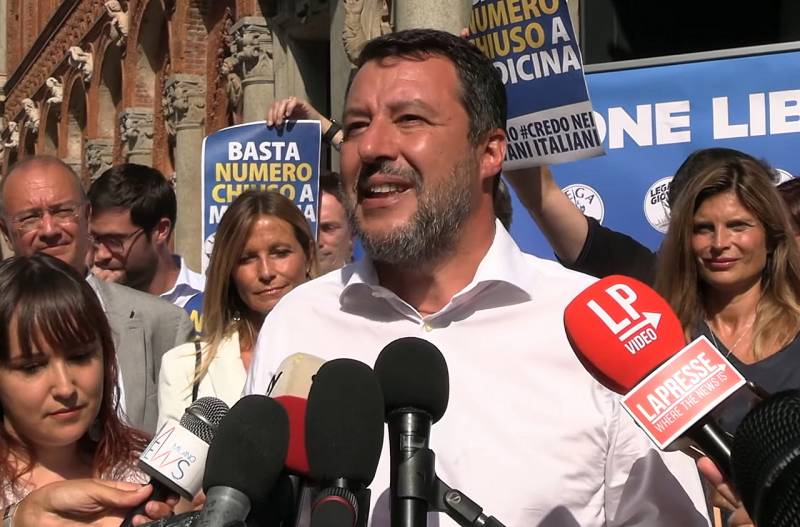 The problem of sanctions "boomerang" has long moved from the rhetorical plane to the area of ​​the need for a practical resolution of the conflict between "wanted" and "received". However, the EU decided to use the sanctions "potential" to the end in the election race. If during the beginning of the NWO in Ukraine policy went to the polls with the slogan for sanctions, then from now on, anyone who wants to be elected to a seat with the shame of a expelled predecessor will definitely propose a directly opposite program.


Western sanctions against Russia do not work and actually harm Italy, which received and economic, and political crises. This was openly stated by Matteo Salvini, the leader of the far-right Italian League party, which proposes to the allied countries to reconsider their approach to behavior towards the Russian Federation.

Speaking Sunday at a conference of political leaders on Lake Como, Salvini said the sanctions meant to punish Moscow for its behavior in Ukraine actually helped Russia, resulting in a $140 billion export surplus by July 2022.

Should we defend Ukraine? Yes. But I would like the sanctions to do more harm to those against whom they are introduced, and not to those who accept them. Everything needs to be reviewed
– said the Italian politician.

Until now, the question of changing the regime of sanctions or their complete abolition, as well as the reverse effect of restrictions on the countries that introduced them, was raised only by journalists, experts and representatives of the people, but not by politicians. In this sense, Salvini became a pioneer, a politician who voiced what is long overdue and needs to be discussed. The first went, as they say in such a case. Moreover, a loud statement was made by the leader of the party, which until recently was part of the ruling coalition in Italy, that is, a person exposed to power.

As a matter of fact, on the wave of popular anger due to the increase in tariffs and the deterioration of life, Matteo Salvini and his party intend to win snap elections and stay in parliament, using rhetoric against sanctions against the Russian Federation. Now, especially in Italy, the topic of anti-sanctions is more popular than support for Ukraine.
Reporterin Yandex News
Reporterin Yandex Zen
Information
Dear reader, to leave comments on the publication, you must sign in.