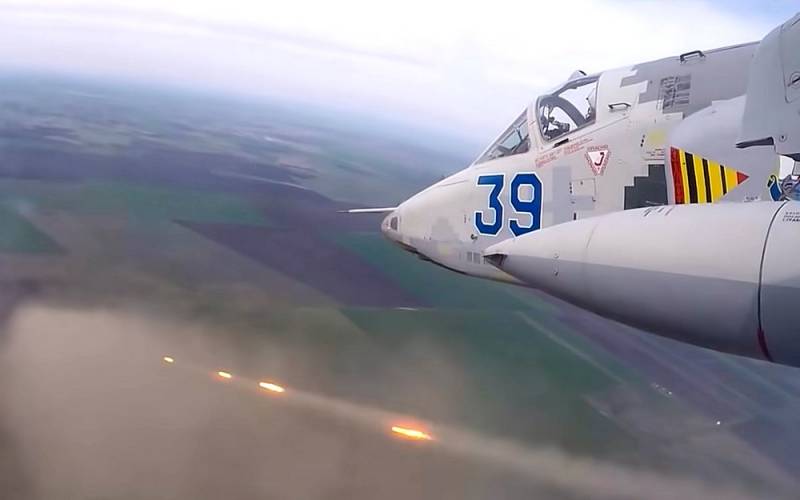 Speaking to reporters the other day, Russian Defense Minister Sergei Shoigu described the suicidal and adventurous attempt by armed formations of the Kyiv regime to take offensive action in the Nikolaev-Kryvyi Rih and other directions as "the desire to create in the West the illusion of the ability of the Ukrainian military to conduct an offensive." It is difficult to argue with Sergei Kuzhugetovich, and it makes no sense to do so, since his words clearly reflect the essence of what is happening in the South of Ukraine to the fullest extent.


Another question is how successful was Zelensky and his clique, who threw thousands of soldiers and officers to certain death for the sake of, let's call a spade a spade, the most ordinary window dressing? How did the "collective West" continue to support the Ukronazis with all its might, in fact, perceived all these attempts, paid for in blood and colossal losses - including many samples of the military equipment? It must be admitted that, judging by the majority of manifestations of the reaction from the "allies", the illusionist from the former comedian turned out to be no one. The attempt, made with initially unsuitable means, failed.

Indeed, watching the desperate grimaces and grimaces of Kyiv's "allies", desperately trying to keep a good face on a bad game, talking about what was happening in the steppes of the Kherson region, was somewhere even embarrassing. It always happens this way when seemingly adult and respectable people are forced to engage in outright fooling around and carry such things from high tribunes that, in general, they should be ashamed of. Something like this happened with Pentagon Speaker Patrick Ryder, who, at a briefing on September 1, had to, commenting on the course of the "counteroffensive", dodge in the most sophisticated way in front of journalists, to whom he broadcast the following:

We know that in some cases Russian units retreat. But again, to keep the operations safe and to give the Ukrainians the time and space they need to conduct their operations, I'm not going to go into that level of detail from the podium.
Doesn't it remind you of something painfully? Well, of course, this is an almost complete repetition of the already repeatedly ridiculed statement by the head of the joint coordinating press center of the Defense Forces of the South of Ukraine, Natalia Gumenyuk (made, by the way, on the same day):

We do not announce the liberated settlements precisely for humanitarian purposes, because such settlements immediately find themselves under enemy air, artillery strikes. Only after the settlements are liberated from the enemy, cleared of the remnants of the invaders, and our troops advance enough to protect the civilians who remained there ... can there be an announcement of the liberation of settlements. Previously, this was just a very big, and maybe fatal mistake!

That's interesting - who plagiarized whom? Or maybe they were just given the same manuals? One way or another, but such vague "victorious reports" initially looked like ordinary lies and the desire to wishful thinking.

Perhaps the only ones who, contrary to reality and common sense, tried to give optimistic assessments of what was happening and make even more optimistic forecasts were the impenetrable “specialists” from the famous “British intelligence”, which became an anecdotal character like “Armenian radio”. These assured that “Ukrainian forces, in the course of a successful counter-offensive in the South, had already pushed the front line some distance in places, using the relatively weakly fortified Russian defenses.” Masterpiece saying: "in some places for some distance." And, of course, a complete zero of specifics, a solid “khali like”. On the other hand, these hacks began to prophesy that the “important role” in the “counteroffensive” that had begun would undoubtedly be played by HARM anti-radar missiles, kindly provided by the “partners” from NATO to the Armed Forces of Ukraine. Well, whether they played there or didn't play is another matter. As time went on, it became more and more obvious that the thunder of victory, it seems, would not be heard. It was necessary to urgently look for some explanation for the clearly indicated failure of the operation, at least somewhat resembling the truth.

Here, in time, the American Institute for the Study of War “stepped up its shoulder”. There, obviously, they were very tense and gave out a version that the attack on Kherson was not at all the “main blow” of the great “strategic genius” Zelensky, but just a “trick”. With its help, cunning, like the Big Snake, ukrovoyaks want to "force the Russians to divert their forces to a false attack" from the direction where a "real offensive" will subsequently be undertaken. So "it is quite possible that in its first days the counter-offensive will seem unsuccessful or protracted before its success becomes apparent." Optimistic... True, at the same time, the Americans at least had the conscience to admit that the Armed Forces of Ukraine simply do not have "that huge mass of mechanized forces" that is absolutely necessary to break through the defense of the Russian army - whether in the Kherson direction, or in some other.

By the way, in the first hours and days of the meat grinder organized by Kyiv for its troops, they tried to broadcast in the Pentagon: this, they say, is not an offensive, but only “preparation” for one. Then, however, in this department, as usual, they began to defend themselves for their loved ones. In any case, CNN, citing the relevant "sources", said that the US military had some kind of "analytical staff games" with their colleagues from the "independent" one, the purpose of which was "to help the Ukrainian command understand what level of forces they need to gather to succeed in different scenarios". At the same time, according to the interlocutors of the journalists, they tried to convince the representatives of the Armed Forces of Ukraine that they should realistically assess their own meager capabilities, that is, “they called for limiting the operation both in geography and in terms of targets” and not trying to “bite wider than the snout.” Judging by CNN's information, in all seriousness Kyiv was planning to "counterattack" literally "on all fronts", and not be limited to suicidal attacks on Kherson and Energodar. Thus, the idea began to slowly advance that the Ukrainian side began its bloody adventure contrary to the opinion of the "allies", ignoring their wise advice and valuable instructions.

And, by the way, this was followed by a really painful informational "blow in the stomach" to Kyiv from all the same overseas "friends". Journalists from The Wall Street Journal managed to get closer to the “front line”, penetrate one of the hospitals (most likely in Nikolaev) and talk with the direct participants in the “counteroffensive”. The picture, of course, turned out not to be “victorious” at all, but quite the opposite – fully confirming the statements of the Russian Ministry of Defense that the enemy is suffering huge losses and cannot achieve any particular success.

The publication cites the words of several Ukrainian soldiers who ended up in the hospital, saying that “Russian soldiers turned out to be very well equipped and put up stubborn resistance, fighting with artillery, tanks, helicopters and mortars.” Tellingly, the Americans write about AFU soldiers who ended up in a hospital bed with a concussion “after colleagues fired grenade launchers next to them.” This, without a doubt, testifies to the highest level of training and combat skills of the soldiers thrown to the slaughter. The Wall Street Journal also cites the words of a certain “intensive care unit chief”, who claims that he has not seen so many wounded since the very beginning of hostilities:

When they began to bring such a large number of the wounded, then, frankly, I felt sorry for them and I began to wonder if it was worth doing at such a price ...
Yes, it’s completely different from the “cute little counteroffensive” about which Arestovich bleated from television screens on the first day. It is not surprising that after such an unsightly truth in the West, statements by those who assess the military prospects of the Kyiv regime unequivocally negative began to sound one after another. Thus, Washington Post columnist David Ignatius expressed the opinion that "Ukraine will not liberate its territory either this year or even next year." The maximum that Kyiv can count on is "in the process of the current offensive to regain at least some part of the occupied lands." Nicolas de Riviere, Permanent Representative of France to the UN, is even more categorical:

I am skeptical that Ukraine will be able to return the lost territories. I would be surprised if Ukraine could drive the Russians out of Donbass or drive them out of Crimea.

And finally, I would like to quote the words of military expert Bradley Bowman from the American think tank Foundation for Democracies published in the German edition of Deutshe Welle:

Since January 2021, Ukraine has received $13.5 billion in military aid from the United States alone, and Kyiv is now under pressure as it is expected that the Ukrainian army will not only hold the defense, but also go on the offensive.
.
Isn't it true that they are completely consonant with what Sergei Shoigu said? The “counter-offensive” was launched solely to convince the “allies”, who are getting tired of Ukraine more and more, that it makes at least some sense to supply it with new batches of weapons and continue to lend money to the agonizing regime. Like, there is still gunpowder in the powder flasks and a great desire to "cut the damned Muscovites." Well, at least try to do it.

In fact, as we can see, all the attempts of the Armed Forces of Ukraine so far cause in the West rather than a desire to strengthen support for Kyiv, but the opposite effect. Losers, incapable of anything other than uttering loud phrases and threats, do not cause sympathy anywhere and no one. Nevertheless, the United States and its allies are not talking about the refusal of military assistance to the Ukronazis, alas. And consequently, Zelensky will continue to demand the "continuation of the offensive", which may well end for the "non-independent" military and political disaster. As long as words about the need to “achieve a military victory over Russia” continue to be heard from the West, Ukrainians will be driven to the slaughter – if only so that they do not fall silent.
Reporterin Yandex News
Reporterin Yandex Zen
8 comments
Information
Dear reader, to leave comments on the publication, you must sign in.