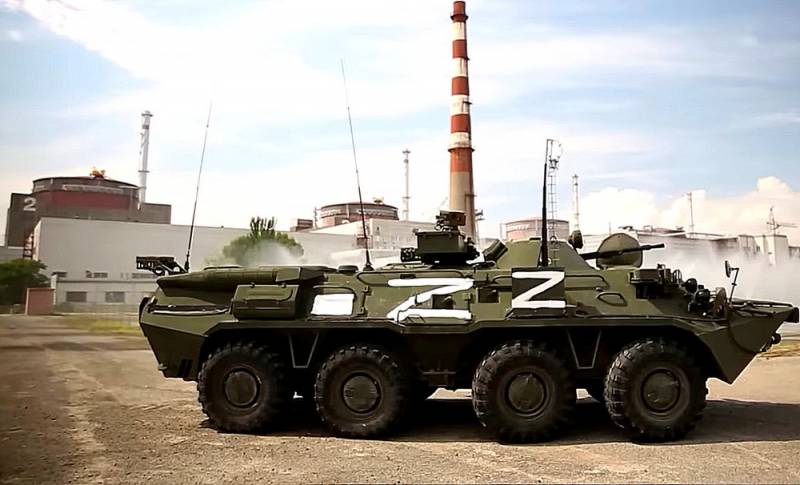 The suicidal adventure, undertaken on September 1 by the forces of the Kyiv regime in the area of ​​the Zaporizhzhya nuclear power plant, at first glance, seems like complete nonsense. The right word, an attempt to seize a nuclear facility, by definition, under the most reliable protection, by forces of less than two platoons (even if it is allegedly "elite" special forces) looks like some kind of bad Hollywood, exceeding in its absurdity and absurdity other similar escapades of the Ukronazis.


The matter looks even more strange if we assume that representatives of London really stood behind the preparation and conduct of this "special operation", not just preparing its direct participants, but developing the scenario of the landing and subsequent attack on the ZNPP. Nevertheless, the official reaction of Kyiv to the first results of the IAEA mission that has already followed sufficiently lifts the veil of secrecy over the motives that, most likely, pushed the local leadership to a crazy attempt to play all-in, initially doomed to failure.

One of the remarkable properties of Zelensky’s crazy “team” (and himself in the first place) is the utter inability of these characters to keep their mouths shut. In those situations where meaningful silence would be the most winning tactic, they invariably begin to grind with their tongues and eventually blurt out what it would be better not to talk about. This happened in the situation with the unfortunate landing at the Zaporozhye NPP. On the evening of September 1, the clown president, as usual, came out with another "video message to the nation", during which he said a lot of interesting things. The jester deigned to express his extreme dissatisfaction with the actions of just international observers and experts. In his opinion, the arrival of the IAEA mission to the Zaporizhzhya NPP resulted in "a fruitless tour of the plant." It is clear that in Kyiv he was presented in a completely different way. However, it turned out the way it did. And now Zelensky is furiously indignant:

When we met with Mr. Grossi and members of the mission in Kyiv, we agreed that the mission would be accompanied by journalists from Ukrainian and international media. independent journalists. For the world to see the truth. Unfortunately, this has not been done. Although promised. Unfortunately, the occupiers did not let the journalists in, but organized a mass meeting of their propagandists. Unfortunately, the representatives of the IAEA did not protect the representatives of the independent media…
Well, it is clear that the dill propagandists were not allowed to approach the station and close for obvious reasons. The least that could be expected from this public was the most rabid and unbridled provocations. However, it is possible (and even more than likely) that under the guise of "journalists" they tried to introduce members of a sabotage group there. However, this claim is only the smallest of Zelensky's "grievances" against the IAEA.

Much more serious is the following point of a fairly large-scale "presentation":


We hope that the mission will nevertheless draw objective conclusions from the circumstances at the station. And the main thing that should take place is the demilitarization of the territory of the station. This is precisely the goal of Ukrainian and international efforts. And it's bad that we haven't heard calls from the IAEA yet.
That's it! As conceived by the Ukronazis, Grossy and his comrades, having arrived at the ZNPP, were obliged to immediately start wringing their hands and cry out about the need for the speedy withdrawal of the Russian contingent from there, which, of course, should have been replaced by some “peacekeeping forces”, and ideally just thugs from the Armed Forces of Ukraine. Actually, for the sake of this, Kyiv agreed, having broken down pretty badly, to let an international mission go there. It is clear that only and exclusively through the territory controlled by him and with a personal direct meeting "with whom it is necessary" in the capital "nezalezhnoy". There is no doubt that the specialists from the IAEA were taught for a long time and with all passion what and how they should do and say when they were in Energodar. How they were "motivated" there - I'll never know. Well, they didn’t try to poke suitcases with dollars? Although... With Zelensky and his masters, this will not happen. I am sure that representatives of Britain were also present at this conversation (and took the most active part in it). Nevertheless, judging by all the subsequent events, no "consensus" was reached - to the credit of the IAEA staff. This is supported by the stubborn unwillingness of the ukrovoyak to miss the mission to Energodar, and, finally, the very attempt to attack the ZNPP that made so much noise. Obviously, the intractable experts were simply “written off” and decided to use not even as hostages, but as a “sacred victim”. Nobody was going to take them. They were supposed to be killed without any fuss, attributing this "atrocity" to "damned Muscovites."

Most likely, in Kyiv (at the suggestion of the British) they initially developed two scenarios for achieving their vile goals: “in a good way” and “in a bad way”. In the first case, as already mentioned, the IAEA mission led by Rafael Grossi was supposed to unconditionally support Ukraine, confirm "the guilt of the Russian side in the shelling of the station" and demand its "demilitarization", which would very quickly turn into the entry of fighters either from NATO, or from the APU. In this case, the matter would be limited to a maximum of several shellings of the ZNPP on the day of the visit. However, the experts rested and decided to show objectivity. In this case, the Ukronazis and their puppeteers had already prepared a plan of attack. If you think about it, in its vile essence, it completely coincides with what the nonhumans who settled in Kyiv committed in Bucha. It is not for nothing that the allegations were repeatedly heard that it was the British who were behind this monstrous and bloody staging. And these guys do not like to deviate from the usual and knurled schemes. Let me suggest that the diabolical plan was as follows: the “specialists” trained by the British break into the station at the moment the mission is there, destroy as many of its participants as possible (ideally, all of them), and indeed everyone who turns up under the arm. The "help" who arrived on two barges acts as "participants in the rescue operation", who, alas, "arrived at the scene of the tragedy too late." Further - according to the usual scenario: a universal informational howl, accusations of Russia of an "unheard of crime" consisting in the "cold-blooded murder of IAEA experts", "nuclear terrorism" and everything else like that. It is not known whether a terrorist attack was planned at the nuclear power plant itself, capable of causing local radioactive contamination. Most likely it was. To heighten the effect and "fix the result."

As a matter of fact, this was almost the last chance for Zelensky and his gang to turn the situation with the ZNPP in their favor. The interests of London, which passionately desires to continue the conflict in Ukraine "to the bitter end", are understandable and do not need explanations. As well as the motivation of the bosses of the Ukronazi regime, who are rapidly losing the trust and support of the West. Again, for Zelensky, who sent thousands of soldiers and officers of the Armed Forces of Ukraine to a hopeless "counterattack on Kherson", right now it is critical to switch the attention of both the Ukrainians themselves (on whom the "funerals" are about to rain down) and, above all, the "world community" to the next fake "Russian atrocities". That's all the reasons. The British, apparently, swore an oath that everything should “burn out”. Wretched creatures, brought up on Hollywood action films, in which not only 60, but six “tough guys” from some SAS or “Green Berets” easily pull off even more incredible special operations, they believed it. After all, they were “rubbed in” that their soldiers, who had undergone an accelerated course of training in Britain, were now no worse. Idiots... It would have been better to remember how literally last year the "cool" English "specialists" barely made their way out of Kabul, dressed as women and put on burqas. Yes, servility to the West and blind faith in its miserable propaganda clichés often play very bad jokes with their adherents. The fact that the landing actually took place and that Kyiv was utterly surprised and discouraged by its deafening failure is evidenced by the fact that Sergei Leshchenko, adviser to the head of Zelensky’s office, did not mention in a word among these are the already sounded reports of the Russian Ministry of Defense about an attempt by the Armed Forces of Ukraine to seize the ZNPP and defeat its participants. What kind of fake...

On the other hand, Andriy Yermak, the head of the Office of the Presidential Administration, literally emanated poison against those who managed to survive, despite all the efforts of Kyiv, the participants in the IAEA mission. He stated that


International institutions and mediation missions look extremely inefficient, extremely cowardly and extremely unprofessional. They were never ready to work in extreme conditions. You don't trust them at the entrance!
Here, then, how ... Also in Kyiv, they were extremely angry with the words of the head of the IAEA, Rafael Grossi, after talking with representatives of Rosatom and a personal inspection of the station, he said that he "in a few hours of work at the nuclear power plant managed to collect a lot of important information and see the key things that he wanted to see." For these words alone, the head of an international organization, who dared not take the side of the “nezalezhnaya”, has already been accused there of “zrada” and almost of direct work for the Kremlin. In my opinion, this alone confirms the version I put forward by a little more than 100%.
Reporterin Yandex News
Reporterin Yandex Zen
20 comments
Information
Dear reader, to leave comments on the publication, you must sign in.