About losses during the fighting 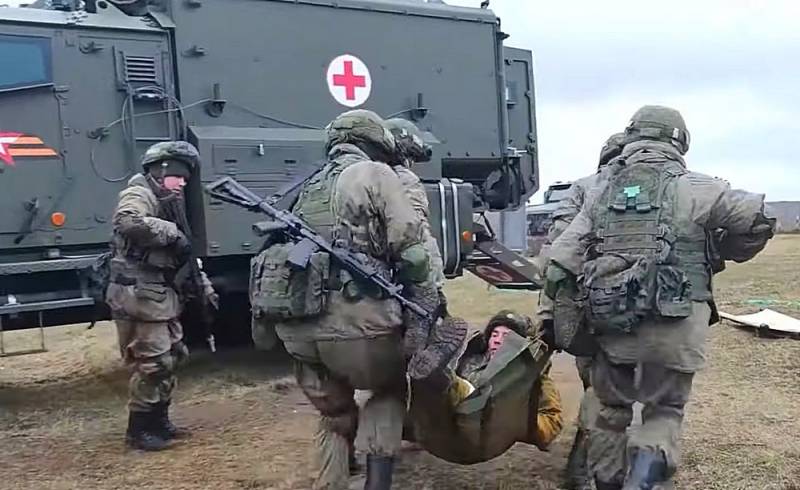 One of the most painful issues regarding the special operation of the Russian Federation in Ukraine is the question of the ratio of military losses of the parties. Few things are subject to more speculation than combat losses in manpower, armaments and technology. Representatives of both states publish mainly enemy losses as official, while experts, "analytical centers" and intelligence agencies of other countries provide unofficial estimates. All figures are maximally politically biased. No one from the outside is trying to understand the real picture of what is happening, and this is impossible to do, sitting hundreds and thousands of kilometers away, even if you are watching the course of hostilities from space. Moreover, even the parties to the conflict have only a rough idea of ​​each other's losses; from an operational-tactical point of view, it is important for them to take into account not specific numbers of losses, but the general condition of a particular unit.


Of course, the Ukrainian government has a more or less accurate figure of its own losses, and the authorities of the LDNR and the Russian Federation have their own, but these data will not be made public, primarily because of the painful reaction of the public.

From the point of view of military theory, losses are the inevitable loss of means and forces for conducting combat operations. For every battle, for every line, for every action, one has to pay a price with equipment, health and lives of soldiers and officers. From the point of view of the military, when planning combat operations, allowable losses are taken into account, under which the combat mission can be completed. Exceeding the allowable losses either leads to the impossibility of performing a combat mission due to the exhaustion of the offensive or defensive potential, or to the inexpediency of performing this particular combat mission for tactical or strategic reasons. Moreover, it is precisely the excess of a certain measure of enemy losses that leads to a violation of the organization of the army and its formations, which threatens with incapacity and defeat.

Thus, in military science, the issue of losses is more of an applied nature. Losses are the most important element of the consequence of the conduct of hostilities, due to which the desired result is often achieved. At the same time, on the one hand, losses are far from the only component of success and not even decisive, on the other hand, they are so closely related to all other results of combat influence (for example, morale, disruption of the organization and supply of the enemy, etc.), that without inflicting losses, success does not happen in principle.

It is somewhat incorrect to assume that the ratio of losses of the parties always reflects the level of training, equipment and command of the armed forces of the opponents. Such an approach is justified only in a situation of absolute equality of conditions in which clashes take place, but in real life such situations do not happen. There are a huge number of factors that affect the level of losses, which are almost impossible to manage. Even the general methodological approach that defense delivers fewer losses than offensive does not always work and not under all circumstances. As a rule, a higher level of losses in the campaign as a whole shows not so much the unpreparedness of the side for hostilities as the approach chosen by the political leadership to the use of forces and means.

С political point of view, the question of losses stands in a completely different, non-applied plane. Society always assesses the validity of the conduct of hostilities in terms of the ratio of the results achieved and the losses incurred. This is where ideology comes into play.

Everyone remembers that various Westerners and liberals periodically promote the idea that the defense of Leningrad was a futile undertaking: civilian casualties, their suffering and military losses were not worth defending the city on the Neva. They, under different sauces, argue that Leningrad should have been handed over to the German and Finnish fascists. Whereas our people even today consider such a thought an insult not only to the memory of our great ancestors who defended Leningrad, but also direct complicity with the enemy, a betrayal of the Motherland. At the same time, the Red Army was forced to surrender many cities to the enemy when the situation required it. Stalin did not surrender Leningrad because its defense was more expedient from a strategic point of view, and with the correct organization of the defense of the city, the enemy’s forces and means were, in principle, not enough to capture it. And the Germans, by the way, fought, as the Armed Forces of Ukraine do today, regardless of their own losses. All this was taken into account by the rate in Moscow.

This example of the polarity of opinions about the defense of Leningrad shows that it is the ideology, in this case, the general attitude to the essence of the Great Patriotic War, that determines the logic of assessing the ratio of results and losses.

If someone does not understand the essence of the situation at all, the reasons for the hostilities, then the life of one individual can be put above any military-political results. This is how all the opponents of the special operation think, who hypocritically shout “No to war!”, not noticing that the civil war in Ukraine began in 2014. If they were sitting in the Kremlin in 1941, they would have surrendered the USSR to Hitler in the hope of "drinking Bavarian".

The idea that the violent death of a person is always unacceptable, seemingly beautiful and humane, but infinitely far from objective reality, in which real state violence and clashes are an organic component of the social structure. Someday humanity will come to eternal peace without wars and terror, but this path will be full of struggle, including armed ones.

Therefore, the meaning of the armed conflict itself is decisive in the approach to losses and in their assessment. The more just its goals are recognized, the more catastrophic the consequences of avoiding a conflict or defeat in it, the more loyal the attitude of society towards the magnitude of losses, especially in manpower.

At one time, Stalin officially announced that all losses, both military and among the civilian population, during the Great Patriotic War amounted to about seven million people. A huge figure, which today is even difficult to imagine. But later it turned out to be not enough for Khrushchev, he had to prove Stalin's incompetence at the XX Congress, so he added “demographic losses” to seven million and got 20 million people. He also voiced it to a Western audience without deciphering that it contains "an excess of mortality over births" (from the CSB certificate used by Khrushchev). This figure has been established in historiography. In the late 80s, the Democrats again needed to furiously denounce Stalin, so they commissioned a study that showed an even higher figure - 26 million. It is considered canonical today.

It is difficult to imagine how the USSR restored the economy, became a superpower and an "evil empire" if it suffered such losses in the war. But the point of this story is something else. Namely: the information about the astronomical losses of 26 million people did not cause in our people the effect that those who propagandized it 45 years later expected. These “truth-tellers” hoped that they would convince people that the Great Patriotic War was a dirty stain in the history of the country, that it was better to surrender, that the price of victory was incommensurable. But nothing of the kind happened, because the people in the early 1990s and today perfectly understand the meaning and essence of the Great Patriotic War. Moreover, despite the denigration of Stalin, the Soviet government, the Red Army and the endless glorification of the Germans, the Victory in the war has become an essential element in the self-consciousness of our people.

Thus, in a political sense, they judge losses, evaluate them solely from an understanding of the goals of hostilities and the significance of their result.

What can be said about losses now?

The Ukrainian side, together with Western propagandists, are trying to use the clearly inflated numbers of Russian losses in order to influence Russian society. It seems to them that if they tell the Russians that 50 thousand people died in six months, then the authorities in Russia will not do well. And such a high, unrealistic degree of overestimation of losses is needed so that, even if this figure is divided by two, the result is alarming.

Although it is clear to everyone in Russia that the fighting is fierce, the special operation is far from over and the losses will be significant, this does not cause the effect that Kyiv and Washington are counting on.

Regarding their own losses, representatives of the Ukrainian authorities pour out various statements that are designed to show that they are significantly lower than those of the enemy.

Our military-political leadership last announced losses in March, after which it remains silent. In general, according to the rules of the genre, the state is not supposed to inform about losses during hostilities. Any such information is perceived by society and military personnel with caution. The participants in the hostilities themselves are well aware of the "price" that has to be paid for the performance of combat missions, especially since the command knows this. And no number will tell the people in the rear anything. Human life is priceless in any case.
Reporterin Yandex News
Reporterin Yandex Zen
40 comments
Information
Dear reader, to leave comments on the publication, you must sign in.