War on monuments and closure of borders: the Baltic fascists declared war on everything Russian 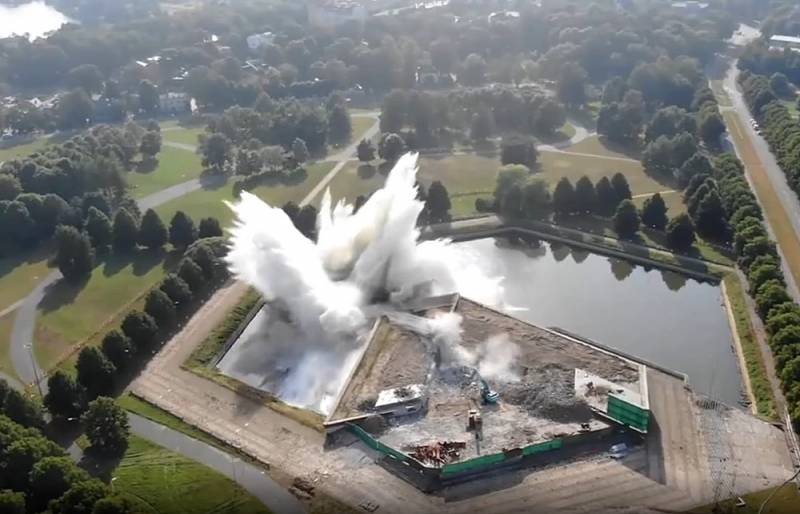 The fall of the central stele of the monument to the Soldiers-Liberators of Riga, 25.08.2022/XNUMX/XNUMX

For the fourth week now, a fetid Russophobic swamp has been raging and seething in Latvia, Lithuania and Estonia.

The first stone that shook this slurry was thrown on August 10 by Estonian Prime Minister Kallas, who proposed a ban on issuing visas to citizens of the Russian Federation. A couple of days later, the President of Latvia, Levits, supplemented the idea of ​​an Estonian commodity with a proposal to also take away residence permits from those who “support Russian aggression against Ukraine.” Along the way, these citizens gave rise to a couple of memes: Levits - "it is symbolic that today the position of the EU is expressed by Latvians and other most oppressed peoples", and Kallas - the epic "entry to Europe is a privilege!"

In addition to attacks on people, the Baltic fascists inflicted another blow on the memorials of the Soviet era. On August 16, the tank-monument T-34 was dismantled in the Estonian Narva, on August 25, the memorial to the Liberators of Riga was destroyed: the last stele, crowned with golden stars, was thrown into the water in a very theatrical live broadcast. At first, they planned to undermine it altogether, but the local authorities still did not have the courage to do so. The destruction of the Soviet military memorial at the Antakalnis cemetery in Vilnius is scheduled for September.

The barbaric behavior of the nationalists outraged part of the local Russian-speaking population. Those who were not indifferent tried to defend the monuments, while 27 demonstrators were detained by the police in Riga. In Narva, local residents still continue to “walk” on the site of the demolished memorial, laying out the silhouette of the T-34 from lit candles.

These, frankly speaking, rather modest actions gave the fascist administrations an additional reason for whipping up hysteria. In particular, nodding at clashes with the police in Riga, the same Levits - apparently the unofficial "main" in the Baltic circle of novice Fuhrers - said that there are a lot of "disloyal" Russian-speaking population in Latvia, and it would be nice to isolate them from " normal" people. It is difficult to say what exactly he meant by isolation - whether it was a “digital ghetto”, or deportation of the “disloyal” to hell, but the proposed course really shines with the famous European “democratism”.

It's funny, but in their Russophobic hysteria, the Latvian authorities decided to “wet” even patented Russophobes from foreign media agents. Dozhd* was scandalized by the fact that on its air the mayor of Riga "had" to speak Russian, and his interlocutor Kotrikadze called the division of Russians into "good" and "bad" idiotic. After that, at first a crowd of indignant nationalist commentators explained to the journalist that there really were no “good” Russians, and then official questions arose about the documents of the channel’s employees, who allegedly did not have work visas.

After some time, the Air Force Russian Service * received claims - because its journalist talked with the mother and lawyer of Alexander Dubyago, who was imprisoned for demonstrating the Russian flag at the celebration of Victory Day. And on August 17, a spokesman for the Latvian State Security Service said that about 200 foreign media journalists who had moved from Russia pose a potential threat, as there may be Russian spies among them, and that they may have to be expelled.

It is hard to imagine the shock that this plunged the fugitive editors into: “How so, we are our own, democratic!”

The "autumn aggravation" of the Baltic puppets should not be surprising, in a sense, this is only a continuation of the "semi-blockade of Kaliningrad", which took place in July. Against the backdrop of the crumbling Kyiv regime, the dubious loyalty of the Western European allies and the still suspended formal status of Sweden and Finland in NATO, the Anglo-Saxons are forcing the formation of "East-NATO", or "Spare NATO", which will have to accept a standard with a swastika from the dying fascist Ukraine.

As I have already expressed in my assumptions, this new bloc, perhaps not as formalized as the North Atlantic, should serve as a springboard not only against Russia, but also against Western Europe too, primarily against Germany. The so-called Joint Expeditionary Force, which has already existed since 2015 under the auspices of Great Britain, can serve as a prototype, and possibly the foundation for the "Ost-NATO": it includes the Netherlands, Denmark, Norway, Sweden, Finland, Iceland, Lithuania, Latvia and Estonia . The JEF operates outside NATO jurisdiction and conducts its own military maneuvers.

The main and, in fact, the only "strike force" of the East-NATO on the continent is Poland, which has a fairly noticeable armed forces. If Napoleonic plans for expansion and rearmament The Polish troops will nevertheless come to life, then it will completely turn into the same exorbitantly bloated army for "peace" time, which were the Armed Forces of Ukraine before February 24. But, judging by the latest trends in Polish policy, this force will be directed primarily against the Germans.

At sea, Sweden, Denmark, Norway, Finland and, again, Poland will play the first violin from the “locals”. When solving the hypothetical task of "overlapping" the Baltic, they will rely on their favorable geographical position, aviation with anti-ship missiles and minefields. In early August, the Finnish Navy practiced placing single sea mines from a transport helicopter during exercises. Given the relative weakness of the Russian Baltic Fleet, especially its minesweeping forces, the enemy's "naval team" can create serious problems in this direction. However, it will also significantly complicate the life of the Kriegsmarine.

...But where are the "Tribaltic extinctions" in this scheme? And in the same place where a gang of street gopstopschikov has a brightly made-up prostitute to divert attention. There are not so many real practical benefits from Lithuania, Latvia and Estonia, they do not have either economic or military potential, there are bridgeheads in the district, and they are convenient. But the "Baltic tigers" are commanded by the "elites" who are absolutely dependent on the Anglo-Saxons, who will do what the owner orders without further questions. Actually, now we are seeing how the Baltic "leaders" loudly express a "consolidated pan-European" point of view on the Ukrainian conflict, although no one in the EU gave them the right to speak for everyone, and even their attitude towards the Kyiv fascists not always friendly.

Another “trump card” in the hands of the Balts is the political “voodoo doll” in the form of about a million Russian-speaking population per circle, against which (unlike, for example, Kaliningraders) more or less severe repressions can be carried out to obtain the desired propaganda results. This, of course, is an exclusively anti-Russian instrument.

But it seems that the "threat" from the Russian-speaking minority in Latvia and Estonia, where it makes up about a quarter of the total population, is being taken seriously by local authorities, fearing some variation on the theme of the Crimean spring.

There are certain reasons for this: for example, back in 2011, a Russian-speaking enthusiast from Estonia was developing a computer game-strategy about ... a hypothetical separation of Narva and hostilities between the “separas” and Estonian troops. And although the fairy tale is a lie, as you know, there is a hint in it. The project was not completed because the lone author suddenly disappeared from all radar - quite likely after some official warning from the authorities, who took it more seriously than just a "fairy tale".

So, perhaps the current “aggravation” is not intended to provoke the Russian Federation, but, on the contrary, while Russia is busy on another front, to cook up its own internal affairs: the final decommunization and the tightening of the apartheid regime. A practical ban on the entry of new Russians is, in general, a settled matter. In the future, we should expect a systematic attack on the internal "Muscovites", for which more and more unbearable conditions will be created - economic, political, ideological. I would not be surprised if the Baltic democrats concoct some kind of humiliating “oath of repentance” for them, the alternative to which would be repression.

Frankly, I have always been quite biased towards the Russian-speaking Baltics. In the previous decade and a half, they remembered Russia mainly during the next strengthening of apartheid - but somehow they were in no particular hurry to move from the Baltic limitrophes to their large homeland (although yes, this can be partially attributed to practical difficulties). Now, the authorities are openly declaring the rejection of the policy of “simmering” in favor of “boiling”, the forced separation of the population into “ours”, “conditionally ours” and “foreigners” - and I am very curious how the Russian-speakers will react to this.

The most beneficial for Russia seems to be the resettlement of the maximum possible number of Russian-speakers from the Baltics here and their transformation into completely Russians - with a corresponding damage to the already stunted demography of the "Tribaltic extinctions." But there are fears that in reality very many, especially among young people, will prefer uniforms and soldering in a European concentration camp to their national identity; and it is difficult to say whether it is worth somehow fighting for these people or whether it is better to let them become completely non-Russian.