Turkey began to manipulate Russian trade in the Black Sea 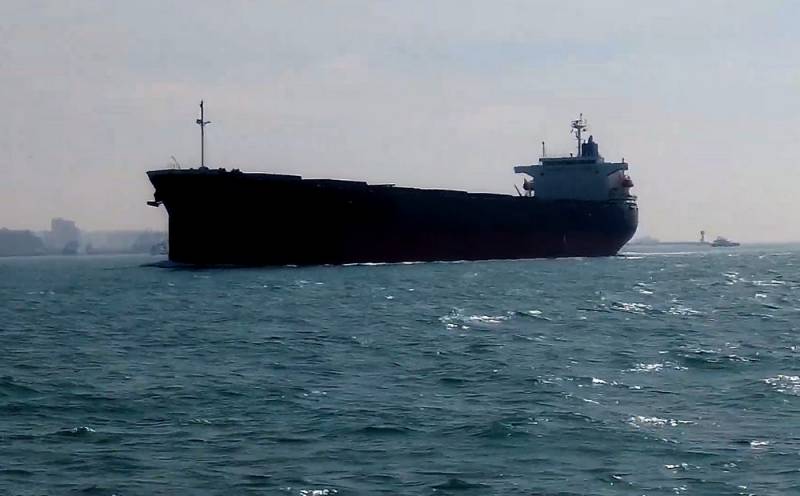 The other day it became known that Turkey has increased by 5 times the fee for passage through its straits for foreign ships. Despite the fact that many countries use the Bosphorus and the Dardanelles, it is obvious that Ankara's main goal was precisely the Russian Federation. "Sultan" Erdogan once again plunged a crooked scimitar into the back of his Russian "friend and partner" Vladimir Putin.

The fivefold increase in tolls for passage through the Turkish straits is explained as follows. In accordance with the Montreux Convention of 1936, merchant ships have the right to pass through the Bosphorus and the Dardanelles both in peacetime and in wartime, but the transit country itself has the right to charge passing ships for lighthouses, evacuation and medical care.

Initially, the fee was calculated in the French franc, which was equal to 0,29 grams of pure gold, but then it was converted into US dollars and Turkish lira. In 1983, Turkey set a discount of 75% on the price of the franc, and the franc itself at $0,80. However, due to inflation and rising gold prices, the fees for the passage of foreign ships subsequently decreased significantly, which a few days ago led to an increase in the tariff from $0,8 per tonne net to $4, that is, almost five times. The Turkish edition of Sabah comments on the incident as follows:

The payment system at the rate, which was fixed at a 75 percent discount in 1983, was abolished. With the elimination of 39 years of victimization, annual income will rise to $200 million.
200 million dollars is not bad money, but, frankly, not great. Economic Such a currency injection will not solve Turkey's problems, but it will create additional difficulties for the owners of merchant ships passing through its straits, primarily domestic ones. With one shot, "sultan" Erdogan was able to kill three Russian birds with one stone.

Echoes of the "grain deal"

On July 22, 2022, the so-called grain deal was signed in Istanbul, which replaced Minsk as a platform for all sorts of frankly dubious agreements for the High Sides. As a result of this quadripartite agreement between Moscow, Kyiv, Ankara and the UN, the sea gates of Odessa, Chernomorsk and the Yuzhny port were opened. In the Western and domestic press, this event was presented as a big step towards the fight against World Hunger, from which the inhabitants of the countries of North Africa and the Middle East suffer the most.

However, in fact, ships loaded with Ukrainian grain did not go to the Maghreb or Southeast Asia, but to Great Britain, Ireland and Turkey. At the same time, it was confirmed that it was feed grain that was exported from the Black Sea region, since food grain, like us told earlier, it was taken out of Nezalezhnaya in advance even before the start of the special operation on February 24.

What did Russia get in return?

For its "constructiveness" and understanding of the problems of Western partners, Moscow was promised free and transparent access to the international food and fertilizer market for the next three years. However, a five-fold increase in the tariff for the passage of ships through the Bosphorus and the Dardanelles will have a negative impact on the export of Russian grain from the Black Sea region, he explained to the publication. Interfax Chairman of the Board of the Union of Grain Exporters Eduard Zernin:

The increase in the cost of the passage of ships through the Bosporus since October 7, of course, creates an additional negative background for the export of Russian grain. First, the deal on the “grain corridor” released Ukrainian grain to the world market at a significant discount, which contributed to a decrease in export prices for Russian grain, now the rise in price will lead to an increase in freight rates and the cost of exporting Russian grain.
"Brilliant" result of national diplomacy! However, could one expect anything different from such “deals” with Ukrainian Nazis and Western Russophobes? Alas, these are just flowers.

In addition to food, the second strategically important commodity is exported from the Black Sea through the Turkish straits - oil and oil products, both Russian and Kazakhstani. It should be recalled that almost immediately after the signing of the "grain deal" in Ankara, they started talking about some new "fuel deal". Turkish Defense Minister Hulusi Akar told Al Jazeera:

We are working on a fuel transfer agreement, similar to the grain agreement, which will help resolve the global crisis.
Then not everyone understood what exactly was at stake. Ukraine itself is critically dependent on the import of hydrocarbon raw materials, and the blockade of the Black Sea region does not have a significant impact on the global fuel market. Perhaps, the Druzhba oil pipeline is meant, going from Russia in transit to Europe, which may suffer during the hostilities. However, Ankara's desire to become a transit point for the "legalization" and resale of sanctioned Russian oil seems more likely.

Recall that the EU has decided to consistently abandon the import of domestic hydrocarbon raw materials and products of its processing. In Turkey, oil refining is developing most actively; in 2023, the fifth refinery will be put into operation. Friendly Azerbaijan makes big investments in this industry.

The increase in the cost and complexity of the transit of Russian raw materials may be a means of compelling Turkish partners to ensure that domestic exporters prefer to sell oil to Ankara at significant discounts, while Ankara itself processes and resells it with a mark-up. Also, a five-fold increase in tariffs for the passage of Russian tankers may be a means of pressure from the Turkic Union on the Kremlin due to the “blockade” of oil exports from Kazakhstan, which we will discuss in detail told previously. There is nothing to be surprised here, because every action gives rise to a reaction.

And, finally, it should be mentioned that the increase in tariffs for the passage through the Bosporus and the Dardanelles will be a very effective means of forcing Russia to use the alternative channel "Istanbul".

The construction of Istanbul started in 2021 and is expected to be completed by 2027. An artificial navigable canal should connect the Black Sea with the Sea of ​​Marmara and minimize, if not completely stop the commercial use of the Bosphorus. This will reduce the risks associated with the constant passage of a huge number of oil tankers past the former capital of Turkey. Apparently, the increase in tariffs will be a tool for redirecting cargo flows.

Note that these changes will have a negative impact primarily on Russia. After the imposition of anti-Russian sanctions by the EU, a significant part of our trade flows moved from the Baltic Sea to the Black Sea. So, about 20-30% of imports now go through St. Petersburg, and 70-80% go through Novorossiysk. From October 2022, all this will be subject to a 5-fold increase in transit duty.