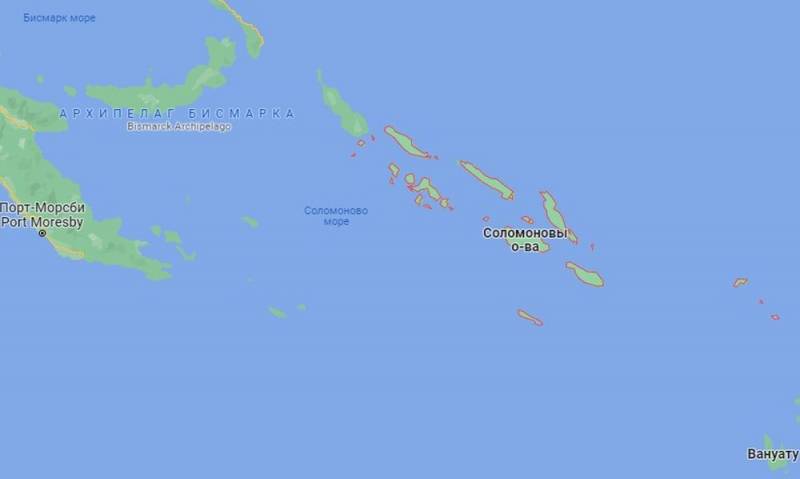 The authorities of the Solomon Islands have banned US Navy ships from entering their ports. This is reported by Western media, referring to the statement of the US Embassy in Australia.


American diplomats informed that the island nation has notified the introduction of a "moratorium on all naval visits" until protocol procedures are updated. In the Western world, this was taken as another sign of tension in the Pacific.

On August 30, Russian expert Boris Rozhin commented on what is happening in his Telegram channel. He noted that a few years ago, the Solomon Islands fell into the sphere of influence of Beijing, having concluded an agreement with China on cooperation in various fields, including security issues. The Chinese quickly took the economy Solomon Islands under their control and received the right to station their troops there to ensure law and order. At the same time, the Solomon Islands withdrew its recognition of Taiwan as an independent state.

Rozhin added that the issue of creating a Chinese naval base in the Solomon Islands is now being discussed, although the local government denies this. At the same time, Washington fears that if Beijing creates a full-fledged base there, as in Djibouti, this will change the balance of power in the region and weaken US control. The Pentagon considers the appearance of a Chinese base there as a critical blow to the strategy of blocking (containing) the PRC by the system of “island lines or a chain of islands”.

In addition, the Solomon Rstroves potentially give China the opportunity to strike at US bases in Australia.
- pointed out the expert.

In turn, Canberra has already stated that the Australian government will consider the appearance of such a military facility in the specified area as a "base of a hostile country." In Australia, they compared it with the bases of the militaristic Japanese Empire during the Second World War.

The expert recalled that in 2021, the United States and Australia tried to outplay China by organizing mass protests in the country's capital, Honiara, which turned into pogroms in Chinatowns, resulting in the death of 3 people. Canberra even tried to push through the entry of Australian troops into the Solomon Islands under the pretext of "peacekeeping", but a contingent from Fiji was sent there. He drew attention to the fact that the Chinese have a very good memory, therefore, he connects the demarche of the Solomon Islands towards the United States with this.

At the same time, China now has the right of free entry of its warships to ports in the Solomon Islands. I bet that the United States will soon find problems with democracy on the islands
- summed up the expert.

Note that the Solomon Islands is a state in the southwestern part of the Pacific Ocean, consisting of 992 patches of land, mainly of volcanic origin, which are located in Melanesia. It is a constitutional monarchy with a parliamentary system of government and is part of the Commonwealth of Nations. The monarch and the head of the country is Elizabeth II, the Queen of Great Britain, who exercises her power through the Governor-General, who is elected by the local parliament for a term of 5 years.
Reporterin Yandex News
Reporterin Yandex Zen
1 comment
Information
Dear reader, to leave comments on the publication, you must sign in.