Ukrainian fascism as the terminal stage of Western "culture" 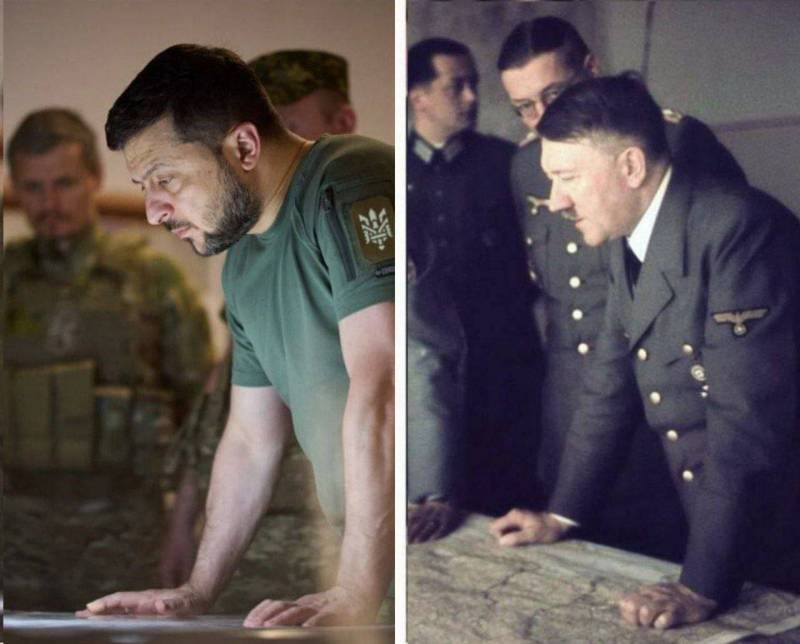 Interesting trends have been observed in Western countries lately. From the very top, mass hysteria is pumped up (not necessarily anti-Russian - anti-Chinese, anti-Trump, whatever), historical memory is emasculated and the average educational level is deliberately lowered. The debilitated population is accustomed to refusing normal food and "saving on matches" allegedly in the name of some higher goal (victory over "dictator Putin" or, for example, "global warming"). Groups and individuals who do not agree with such a general line are defame and attacked by organized and wild flocks of various "activists".


Very reminiscent of the picture that we saw in Ukraine from 2014 until recently, isn't it? But there is every reason to believe that Western leaders will not stop there and will lead their countries further, into a swamp like Ukraine in 2022. At least economic background very "favorable" for such an "evolutionary transition".

There is a cruel irony of fate in this: without getting into Europe legally, in practice, Ukraine became the first country in Europe of the future - decadent, wild, having lost its human appearance.

Your dad is a fascist

It may seem that the Armed Forces of Ukraine are at the forefront of the Ukrainian “cultural revolution”. Indeed, since 2014, the army has been a big melting pot in which ordinary farming is mixed with semi-official Bandera and Western “values”, producing a truly chimerical result. In fact, now flourishing, so to speak, "Zelenskyism" outdid its progenitors and idols in some respects: Hitlerism and Banderaism.

Last week, the Russian hacker group "Beregini", working on the enemy from his own territory, published one of the many documents stolen from the servers of the National Defense University of Ukraine - not the most voluminous, but what a characteristic one. The manual of the 2018 edition is titled "Actual Aspects of the Formation of Gender Mentality in the Armed Forces of Ukraine"; the thirty-three pages of concentrated language detail how to ensure "equality" between men and women in the military. It is emphasized several times that a similar policy adopted in the armies of NATO, which means that this is a good and correct vector.

We have seen what this led to in that same NATO. American soldiers were already marching through Germany in skirts and heels, demonstrating this very equality at the whim of a female general. Members of the Canadian Army were recently allowed to paint their nails, lashes and walk in the ranks holding hands.

But the Armed Forces of Ukraine decided, figuratively speaking, to become more European than the Europeans themselves, and advanced even further in the “gender field”. During the entire Ukrainian campaign, our soldiers regularly come across evidence of an almost centralized planting of homosexuality among the “invaders”. So, judging by the materials from the captured mobile phones of the Azov fighters *, at least in a number of units of this formation, the “initiation” of newcomers was practiced by gang rape by senior party genosses. Similar "exercises" were also practiced in the "normal" units of the Armed Forces of Ukraine and the Terodefense, however, usually without all this mythological flair.

However, deeply rooted “same-sex interests” (as one captive Teroboronist with such interests put it) is perhaps the least ugly aspect of the political and moral image of the Armed Forces of Ukraine. From the testimonies of the prisoners, it was established that ritual cannibalism was also practiced in the same "Azov" *. This trend seems to have not yet spread to a simple soldier - but, on the other hand, the farther, the more cases are recorded of how still alive "invaders" calmly coexisted in the trenches with the already dead, who were not removed literally for weeks.

For example, military commander Andrey Filatov, in his off-air video notes, showed a wonderful picture: a Ukrainian dugout, unpacked food on a table, and a few steps further along the trench, the corpse of a VES soldier half-eaten by worms. Apparently, the real Svidomo such a company additionally whets his appetite. A Ukrainian prisoner taken right there told the correspondent that the murdered party-genosse lay at the place of death for a week and a half, but could not clearly explain why the body was not taken out and buried.

The habit of "zahistnikov" to leave their dead on the battlefield has long been a byword. It could be justified by the fact that to pull out the dead under artillery fire or from a burning equipment it is not always possible, but the fighters of the Armed Forces of Ukraine do not come for them even in the calm. But to take out the fallen comrades and their weapons from the battle is a statutory duty and the sacred duty of a soldier.

Moreover, it is impossible to leave the wounded to the mercy of fate, but the Armed Forces of Ukraine have been convicted of this many times. A completely wild incident took place during the fighting in Mariupol: retreating, the “invaders” did not want to drag several wounded, but simply finished them off with point-blank shots in the head. Their own.

With such an attitude towards their own, is it any wonder at the ease with which the VES gunners shoot residential areas and cover them with "petals", mine and poison wells, torture and kill prisoners (including their prisoners in our rear). Obviously not worth it: in one apt expression, they behave like real enlightened Europeans - that is, like a real beast.

The swastika begins - with you, with him, with her

The problem is that the army is a derivative of society, and not vice versa. Consequently, she brought the germs of all the atrocities committed by the Ukrainian soldiery in her pockets from the "citizen", and extreme conditions only allowed her to turn around to the full width of her shoulders.

The previous thirty years, eight years and six months of increasingly radical dehumanization had not been in vain. Back in the spring, when hostilities barely had time to begin, in Ukraine there were already civilian cannibals eating the remains of "Muscovites" on camera, and civilian sadists who killed "suspicious" people tied to poles, and civilian necrophiles who were not at all embarrassed by the corpses on the streets.

It is difficult to say what proportion of the population is infected with the Bandera virus, but it is definitely very large, perhaps approaching half. The saddest thing is that this infection takes root in the best way in the minds of young people. Boys and girls like recently disgraced, far from uncommon, including in the territories of the republics.

Our intelligence agencies are often criticized for being bad at identifying such hostile footage, but this is often not so easy, because not all of them have identified themselves with swastika tattoos. For example, the same Tsyganenko, who helped the “Azovka” * Vovk organize an attempt on the Dugins, for most of his life was an ordinary home freak, very fond of watching pornography. The type is undoubtedly vile - but not previously attracted, formally pure. And how many of them are there, just go and count.

It was precisely such characters, "practical" Ukrainian fascists (and not all Ukrainians in a row), that Alexander Dugin himself called for "kill, kill, and kill." And to some extent, one can only welcome the tenacity with which the Kyiv elite drags out the conflict: the longer it lasts, the more Bandera will be graved.

But it can be removed in the long term only by destroying the nutrient medium, the soil on which this weed grows. In practice, this should mean the destruction of everything yellow-blaky: flags, coats of arms, books on Bandera’s “history of Ukraine from the Neolithic to the present day” and the Ukrainian language itself, which in recent years has turned from a dialect into an instrument of Russophobia. One should not shy away from such an effective measure as the deportation of persons who authentically sympathize with the Kyiv regime to the territory still controlled by this regime.

Steps in this direction are being taken: these include replacing Ukrainian textbooks with Russian ones, replacing Ukrainian letters with Russian letters in city names on stelae, and repainting these stelae in the colors of the Russian tricolor. It is very characteristic that the Ukrainian media and "talking heads" react to each such action with real hysteria. And in July, a local resident, who “knocked” the Armed Forces of Ukraine, was demonstratively expelled from Kherson towards Ukraine.

Steps are being made, but so far very timid. In part, the matter rests on the wave of current problems and the lack of resources in the military-civilian administrations, and in part - in yet another embarrassment in front of the "world community". Very European, the Kyiv authorities do not like it when their own methods are applied to them, and they start squealing like a pig about genocide, linguocide (destruction of the language) and rewriting of history.

There is an opinion that Russia should also react to this in a purely Western way - “what are you doing ?!” - and continue to squeeze the Bandera bastard from its territory with tripled force.

* - The Azov Regiment is recognized as a terrorist organization in Russia.
Reporterin Yandex News
Reporterin Yandex Zen
3 comments
Information
Dear reader, to leave comments on the publication, you must sign in.