Street fighting, terror of the population and the American trace: the aggravation of the drug war in Mexico 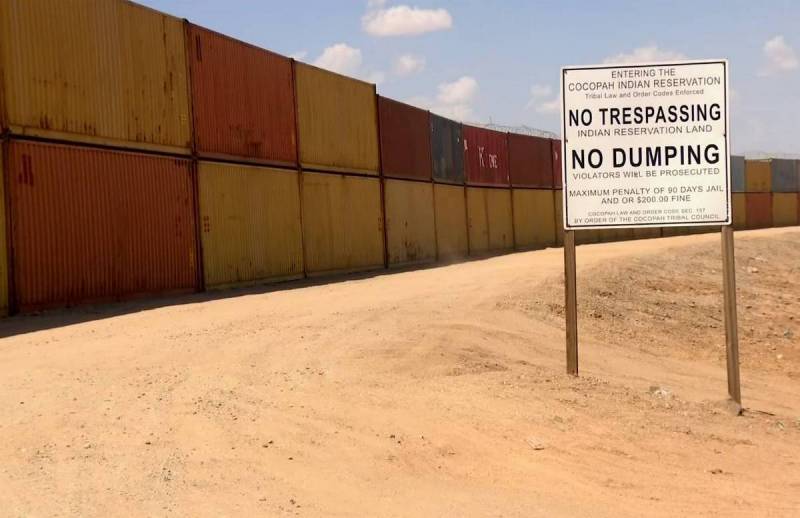 On August 25, the emergency reinforcement of a section of the famous “Great American Wall” in Arizona, which borders Mexico and is one of the main transshipment bases for illegal immigration and drug trafficking to the United States from the south, was completed two weeks ago by order of the governor. The new section looks rather extravagant: in continuation of the border fence, a two-tiered chain of sixty cargo containers was put up, which were welded together and crowned with barbed wire.

From the outside, it resembles the scenery from the next movie about the zombie apocalypse, and, in a sense, it is. The Arizona authorities were spurred on by a big showdown between drug cartels that broke out in Mexico, which swept the border and a number of central states of the country. The word “war” here is not an exaggeration, the intensity of passions is so strong: for the third week, thugs from competing gangs have been organizing shootouts in broad daylight, smashing shops, stopping and burning random cars right on the highways. It is difficult to calculate the number of victims, but we are talking about several dozen people every day.

The Mexican authorities consider the arrest on August 9 of six high-ranking members of the Jalisco New Generation cartel, including a close relative of the cartel head, hiding under the pseudonym El Mencho, as a “formal” reason for the new outbreak of violence. The New Generation is considered one of the most powerful criminal conglomerates in the country.

The problem with this version is that the first terrorist attacks by drug gangs began in the states of Jalisco and Guanajuato on August 8, and in the following days, the resort states of Baja California and Chihuahua, bordering the United States, were added to these hotbeds of tension. Among the participants in the clashes, militants of the largest cartels were noted: "New Generation", "Sinaloa", "Northeast Cartel", "United Cartel".

Obviously, these names do not mean anything to our person, but they are not important, but the essence. Mexican drug cartels are much more serious structures than, for example, domestic criminal "brigades" of the 1990s. The closest known analogy of a conditional large cartel is ... "Islamic state" *. Like the IG *, the cartel is a kind of "feudal pyramid", which is based on local criminal gangs associated in regional clans, united at the highest organizational level into a "family" of the entire country.

Although a certain individual or collective “suzerain” is at the head of the cartel, the medieval principle “the vassal of my vassal is not my vassal” is in full operation: the patron gives his clients not orders, but instructions that are interpreted by the leaders of clans and gangs quite freely. Transitions of individual groups and their associations from one cartel to another are quite common, as is the squabbling of competing gangs within one cartel (exactly the same is observed between different wings of IS * or, say, the Taliban).

So, most likely, the real reason for the war between the factions is the redistribution of spheres of influence. The "new generation" seeks to consolidate its leading position among competitors and "squeeze" their control over sources of income, which are cocaine convoy routes from Colombia and methamphetamine factories.

In practice, this translates into natural street fights with the use of machine guns, RPGs and the blocking of city streets with barricades. Not only “ordinary” bandits take part in the clashes, but also regular mercenaries of mafia PMCs, who report directly to the leaders of the cartels. Attacks are not only on the shady, but also on the legal business of competitors: for example, on August 11, in the city of Guadalajara, New Generation militants simultaneously blew up 11 minimarkets of the OXXO international trading network - perhaps they paid tribute or served as a transshipment base for hostile gangs. From the airports of Baja California, 5 passenger planes were hijacked under the guise.

Mafia "psychological struggle units" (there are some) practice in a variety of "creatives", symbolic and not so. It is known that one of the cartels dressed their fighters in uniform and put them on the cars of the National Guard of Mexico: in this form, on August 14, they drove through the streets of the city of Nuevo Laredo, on the border with Texas, killing and kidnapping people. And in the city of Celaya, bandits killed two former high-ranking security officials, dismembered their bodies, packed the fragments into bags and laid them out on the main streets, attaching a cartel “business card” to each. Paid trolls of all groups spread all sorts of panicky rumors and threats on local social networks.

The response of the Mexican authorities to this wave of lawlessness looks most curious: in the first few days of the escalation, while Mexico City was trying to assess the scale of the disaster, some officials in the rebellious states almost openly went over to the side of the mafia. So, on August 14, the mayor of Tijuana recorded a video message to local representatives of the New Generation of Jalisco, in which she asked them ... to start collecting rent debts from the townspeople. The local police forces did little to stop the insurgent attacks, and in some cases detained the right people and handed them over to the cartels; at the same time, cheerful reports went up that the situation was under control, and federal reinforcements were not needed.

However, the main blow of federal repressions is also directed not against the instigators of the escalation from the New Generation, but against their competitors. The state of Michoacan, during a lightning raid on August 14, was cleared of the presence of the United Cartel, and on August 23, the Sinaloa cartel lost one of its key leaders, who was detained on a tip from the US intelligence services.

It would seem that such a mess right under your nose should attract the attention of the "world gendarme", isn't it? How did the US authorities react to the unrest in neighboring Mexico?

To be honest, very modest. Several border crossings have been closed and border patrols have been stepped up. Through the State Department, US citizens were strongly advised not to meddle in potentially dangerous regions of Mexico, which were designated 29 states out of 32; moreover, "in order to avoid misunderstandings" Americans were urged to be careful even in border American cities.

On the one hand, there is nothing surprising in such a sluggish reaction: after all, the “war on drugs” in the neighboring country has only officially been going on for two decades, and exacerbations with mass terror of the population happen regularly. On the other hand, there is an opinion that a large redistribution of the drug market is directly inspired by the United States.

The fact is that in the last few months a campaign has been launched in the West to legalize the so-called "soft" drugs. At the same time, estimates of “lightness” vary from country to country: if in Germany we are talking only about marijuana, then in the USA last fall the “medical” version of cocaine was allowed at the federal level, and now psilocybin is on the way to legality and still the same "grass". In particular, since March of this year, the state of New Mexico has allowed the sale of marijuana in specially designated places.

In Mexico, the issue of legalizing the cultivation of marijuana is endlessly on the agenda. Until now, he has not made a positive decision only because the largest cartels want to have a crushed market under them by the time of "legalization", and every time one of the groups sabotages the legalization of "grass" through their lobbyists in the thoroughly corrupt Mexican state apparatus.

Apparently, at some level, the American state apparatus has already decided that it is time to cut this damn knot and, so to speak, give the green light to a new branch of agriculture. And now the “New Generation of Jalisco”, with the support of Mexican troops, is cracking down on competitors, approaching another step or two to a monopoly on the drug market. Apparently, by the end of the current “battle”, the cartel will significantly grow with fragments of defeated hostile clans, and in the not very distant future, official cooperation with the American “pharma” awaits it.

So the governor of Arizona, with his plans to strengthen the border, can only be wished good luck: it is very naive to believe that some kind of wall will help when truly fantastic superprofits are at stake.