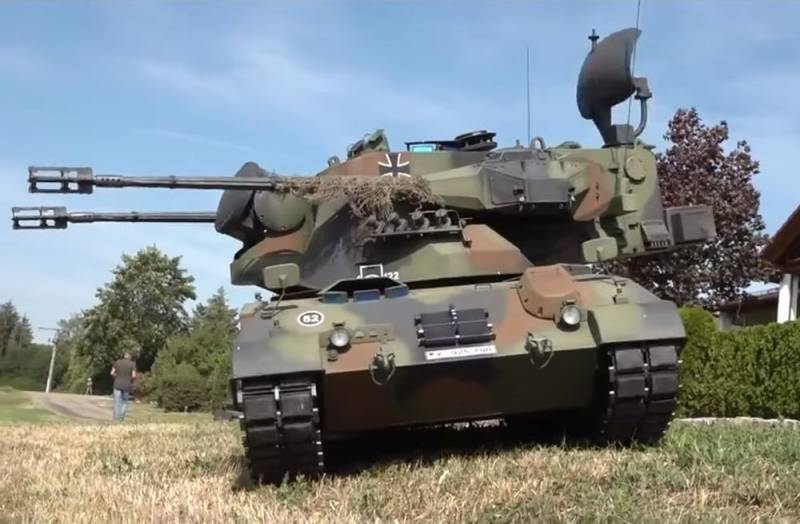 The first video has appeared on the Web, which shows one of the German anti-aircraft self-propelled guns "Gepard" (Gepard), located in Ukraine. In the video, ZSU recklessly turns its turret to the music, pointing the barrels of its Swiss Oerlikon (Oerlikon GDF-005) 35-mm cannons into the sky.


It should be noted that the geolocation to the published frames and other related explanations, unfortunately, were not attached. Tentatively, 3 of these tracked systems were delivered on August 8, and the rest are being prepared for transfer. In total, Berlin has so far promised to transfer 30 Gepard ZSU units to Kyiv. Thus, the Armed Forces of Ukraine theoretically received weapons to counter Russian helicopters.


"Cheetahs" are designed to directly cover ground units. They can destroy air targets at ranges up to 4 km and at altitudes up to 3 km, flying at speeds up to 350-400 m/s, as well as ground (surface) targets at ranges up to 4,5 km. The ZSU ammunition load is 310 shells with high-explosive fragmentation, armor-piercing caliber and sub-caliber striking elements.

Note that German Chancellor Olaf Scholz personally checked the Gepard ZSU before sending them to Ukraine. The ostentatious zeal of the head of the German government can be understood.


Firstly, he was literally “pecked” in the West for military assistance to the Armed Forces of Ukraine, which moves at the speed of a “turtle”. Secondly, many Western functionaries still remember how in October 2007 the Oerlikon GDF-005 robotic gun opened uncontrolled fire in South Africa, killing 9 soldiers on the spot and injuring 14 more. Then they announced that the tragic incident occurred due to a malfunction in the computer that controlled the actions of the gun and the case was hushed up.
Reporterin Yandex News
Reporterin Yandex Zen
4 comments
Information
Dear reader, to leave comments on the publication, you must sign in.