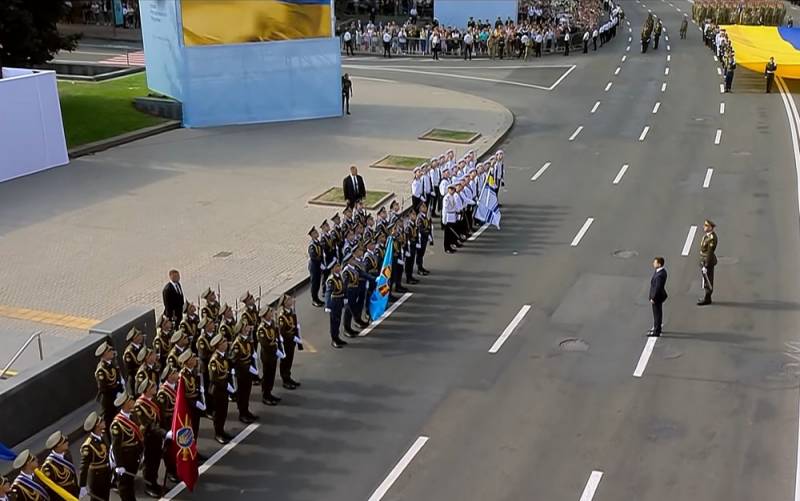 Natural hysteria and panic, strongly inflated by official Kyiv on the eve of the “main state holiday” in the context of the ongoing special operation to demilitarize and denazify Ukraine, look rather strange. It would seem that here it is, the reason to “rally the nation in the face of a threat”, to boast of yet another invented “peremogs”, to raise the noticeably sour “fighting spirit” of the masses and the “army” caught in the cities and villages. So, out of all the pro-government “irons”, it sounds the same - a continuous “bomb”, “attack”, “massive strikes”.


It’s somehow wrong ... I apologize a thousand times for a somewhat inappropriate parallel, but you can imagine Stalin sobbing at the Mausoleum on November 7, 1941: “Everything is lost, comrades! The Wehrmacht is on the threshold and is about to blow us to shreds ... "? In no way am I comparing countries, circumstances and the Supreme Commander with a clown, I just want to emphasize that the actions of Zelensky and his team look wild. Unless… Unless we assume the quite probable – that all the hype raised by the Kyiv regime is intended to prepare “public opinion” both in Ukraine and, above all, “on a global scale” for the wildest provocations that the Ukronazis themselves intend to arrange. What specifically? Let's try to figure it out.

It's up to you, but all the warnings and forecasts for the “day of independence” coming from the upper echelons of the Ukrainian government sound exactly like a strangled death rattle, and not like an inspiring call “to the nation”. The tone, as usual, is set by the clown president himself, who on August 20 announced that it was precisely for the holiday that “Russia is preparing something especially nasty and tough.” No, after all, the lexicon of this character is worthy not of a statesman, but of a capricious and stupid boy ... Secretary of the National Security and Defense Council of Ukraine Oleksiy Danilov (well, he couldn’t keep silent at such and such a moment!) Is inclined to believe that a “especially cruel” blow to “ "nezalezhnoy" may be the elimination of the jester himself in power or, at worst, other "provocations and insidious actions." True, the militant veterinarian immediately reassured his fellow citizens, telling them that Kyiv "has information about the enemy's plans in almost all areas" and "works ahead of the curve." Yeah... That's just what scares me. Ukrainians. The most flamboyant and pompous statement was made by the main directorate of intelligence of the “nezalezhnaya” Ministry of Defense, which has long turned from an intelligence agency into a propaganda one:

There is an increased threat of missile strikes and other provocations, both inside the country and outside. Russia and the Putin regime attacked the independence of Ukraine and independent Ukraine. They're really obsessed with dates and symbols, so it's only logical to be super-cautious and ready for Independence Day to be attacked as well. Ukraine is ready for this!
That's how everything is complex and patriotic - and the hated Russians were spat upon, and the citizens were a little intimidated, and they reported on "readiness". It must be said that the winding up of the “holiday” psychosis is far from being limited to words alone. Preparatory measures are being taken, and very concrete ones at that.

In the capital itself, "non-independent", by the decision of the local head of the state military administration, Nikolai Zhirnov, any mass events are prohibited for the period from August 22 to 25 - "in connection with possible shelling of Russia at decision-making centers and critical infrastructure facilities." Even the metro in Kyiv from August 21 to 24 will close an hour earlier - at 21:00. So that everyone does not run around ... What is especially significant, it was instructed to "reduce to a minimum the number of officials" who these days will ensure not only the work of the central state authorities and administration, but also "the life of Kyiv." What a touching concern! Or simply the desire to remove from under the blow, which will be inflicted by non-Russians at all, “their own”? In the regions as close as possible to the line of the NWO, they took an even more radical path.

For example, in Nikolaev and the region, no official events will be held at all by the “holiday”. Gauleiter of the regional military administration Vitaly Kim justified this decision as "preparation for increased danger." But in Kharkiv, according to the local governor Oleg Sinegubov, the curfew will last from 19:00 on August 23 to 07:00 on August 25. The official urges citizens to “stay at home and not ignore the alarm”, in order to “not give the enemy a chance for any provocations”, and in general “to be as vigilant as possible”. As far as is known, the Ukronazis, as a rule, use such “closures” of front-line cities to carry out mass “cleansing operations” in them, special operations to identify and destroy “pro-Russian traitors”. In particular, this was the case in the same Nikolaev. Kharkov, very likely, expects a similar terrible fate. At the same time, an aura of doom clearly hovers over everything that happens and the realization that the current celebration is most likely the very “last parade”, behind which there will be neither “nezalezhnosti”, nor the most “nezalezhnaya” ...

For whom will the bell toll?

However, the device of the most vile and bloodiest provocations, in which Kyiv traditionally tries to blame the opposite side in advance, this trend does not cancel at all. What exactly can happen? Deciding on possible options is not so difficult as it might seem at first glance. In order to try to predict what kind of abomination the Ukronazis intend to create, one should listen to their own "forecasts". After all, it has long been known that Kyiv is trying to “hang” responsibility on others for exactly what it did (or intends to do) itself. Well, what do we have here? All the same Main Intelligence Directorate of the Ministry of Defense of Ukraine could not help but please with a fresh "creative". According to his unfortunate "analysts",

On the Independence Day of Ukraine, the occupiers plan to hold a demonstrative trial of the captured defenders of Azovstal in temporarily occupied Mariupol, during which the army of the occupiers can launch a precision missile attack on the premises in order to subsequently transfer the blame for this murder to the Ukrainian side.
As you can see, acting stupidly and stereotyped, the Ukronazis are simply preparing to arrange Yelenovka-2. At the same time, the truth should not be ruled out and the possibility of using not American MLRS, but, say, the DRG, which will have the task of blowing up the venue of the tribunal. Here, either to strengthen security measures, as they say, above the upper limit - or to transfer the court away. In any case, it would be extremely unreasonable to discount such an obvious “hint”. However, Kyiv also has options on a much larger scale. True, they belong more to the category of "horror stories", but they are also worth mentioning - so to speak, to understand the overall picture.

Another scenario was voiced not by an official or an official, but by a seemingly “independent military expert” - the director of military programs of the Ukrainian Center economic и political studies named after Razumkov by Nikolai Sungurovsky:

This version, however, was quickly refuted by the Ministry of Internal Affairs of Ukraine. True, at the level of just an adviser to the head of this extremely degraded (even by the standards of “nezalezhnoy”) office, Yevgeny Enin, who assured that “no assault on the capital or Russian offensive is expected that day.” True, the pan adviser immediately recalled that "the Russians are armed with missiles and aerial bombs and other, so to speak, surprises prepared for the civilian population of Ukraine." Exactly what is for the peaceful. Here's the scoundrel! Thus, Enin signed up for the main and most likely scenario - "massive missile and bomb strikes", with which "damn Muscovites" are eager to spoil such a "great" holiday for Ukrainians. The fact that the provocations planned by the Ukronazis will be carried out precisely as part of an imitation of such actions by the Russian army is also believed by the statement of the adviser to the head of Zelensky’s office, Mikhail Podolyak, who is turning into the most vicious and aggressive mouthpiece of the regime:

Russia is an archaic state and it ties its actions to certain dates... They hate us, so they will try on August 23 and 24 to increase the number of cruise missile attacks on a certain number of our cities. Of course, Kyiv will be on this list.
And finally, here is the main proof for you:

- these words of a certain “high-ranking official from the US administration” were replicated by all Western media the day before.

It is through such seemingly "unofficial" but clearly sanctioned "stuffing" that Washington has recently been "bringing to the public attention" its position on Ukraine. It is clear that in Kyiv they will act only on his orders. Consequently, most likely, a sanction was received specifically for the imitation of "missile strikes." In favor of this, not only what it says, but directly shouts the next call of the State Department to US citizens to immediately leave the territory of the "non-independence" - by any means and methods and as soon as possible.

What is especially frightening against this background is the sudden appearance in Ukraine of “new alarms”. Their list included a chemical hazard signal (the sound of church bells), a radiation hazard signal (the tocsin) and an evacuation signal from the city, which sounds like a train whistle. Taking into account the fact that Russia has repeatedly stated that it has no intentions to use any nuclear weapons (including tactical ones) during the NMD, and certainly has not used and will not use chemical weapons banned at the international level under any circumstances, the conclusions suggest themselves the darkest. After all, it is the Kyiv regime that carries out constant and regular shelling of the Zaporozhye nuclear power plant, with the aim of causing damage to this facility with subsequent radioactive contamination of vast territories. It was the Armed Forces of Ukraine that literally recently used chemical weapons against the fighters of the Liberation Forces. So what will prevent them from using it against civilians in their own country, subsequently blaming Russia for this in order to call on the “world community” (that is, NATO countries) to directly intervene in the conflict?

In this situation, everything depends on whether a final decision has been made in Washington and on what specific villainy Kyiv has received “go-ahead” from overseas curators. In any case, nothing good can be expected for the inhabitants of the Ukrainian regions who were held hostage by the Nazi gang in the upcoming "holiday".
Reporterin Yandex News
Reporterin Yandex Zen
18 comments
Information
Dear reader, to leave comments on the publication, you must sign in.