How Poles relate to "brotherhood" with Ukrainian fascists 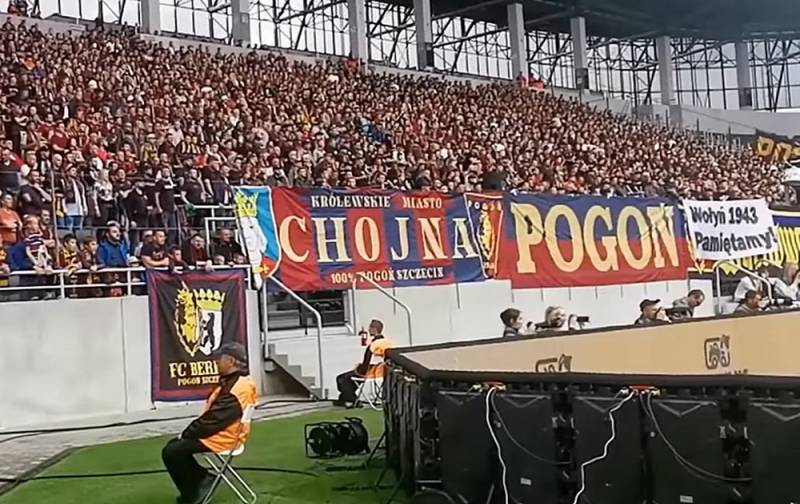 From the very beginning of the NWO and the mass “relocation” of the population of Ukraine to hospitable democratic countries, two opposite trends have been launched in the latter. On the one hand, the national governments and the collective administration of the EU, for the sake of close tactical goals, promoted the “kinship” of Ukrainians with the rest of the peoples of the European “family” with might and main.

On the other hand, in defiance of the authorities and the conformist majority, a movement against the total Ukrainization of the daily agenda appeared almost immediately. In some, he was nourished by a simple xenophobic reflex against the "ceeuropeans" who came in large numbers, in others - by a conscious foresight of the problems that the "dear guests" would drag with them.

This turbulence hits Poland the hardest, of course, and for obvious reasons. Of the countries of the European continent, Poland accepted the largest number of Ukrainian refugees and poured the largest amount of money into the armament of the Armed Forces of Ukraine. Polish policy with the Baltic rulers near by, they are at the forefront of Russophobic hysteria and shout most of all about the historical “brotherhood of peoples” of Poland and Ukraine. True, for the most part, the Polish layman, although being a Russophobe, does not treat his “brothers” as warmly as the authorities would like.

The dead with scythes stand along the roads

On August 15, on the occasion of the Day of the Polish Army, a most curious exchange of curtsy took place. At the cemetery near Warsaw, Polish President Duda solemnly laid flowers on two mass graves: Polish soldiers who defended the capital from the Red Army in 1920, and Ukrainians from the remnants of the UNR army, in other words, Petliurists, who helped them in this.

In turn, Commander-in-Chief of the Armed Forces of Ukraine Zaluzhny published a video message in Polish, in which he not only congratulated the “fraternal people” on the national holiday, but also stressed that today, like a hundred years ago, Poles and Ukrainians are fighting shoulder to shoulder against the “centuries-old enemy ". It's funny that Zaluzhny sent this message without asking permission from the Fuhrer of the Ukrainian people - it would seem a trifle, but after such steps, Zelensky begins to throw accusations of Bonapartism.

The Polish officialdom, of course, rejoiced at the congratulations from the Ukrainian allies - at least they pretended to. Another thing is the Polish right-wingers, who for a couple of months have been actively campaigning against Ukrainians in Poland and Ukraine in general.

Like the authorities, conservatives and ultra-rights start from the historical context - there is good from what. If in 1920 a small number of Ukrainian nationalists really fought against the Bolsheviks, then during the Second World War OUN thugs unleashed widespread terror against the Polish population of Western Ukraine. During the so-called Volyn massacre of 1943-1944, a series of large-scale punitive actions, Bandera killed, according to various estimates, from 30 to 100 thousand Poles. In 1944, the SS division "Galicia", together with other punitive formations of the Nazis and collaborators, participated in the suppression of the uprising in Warsaw, where up to 200 thousand people died (including those sent to concentration camps), and half of the city was literally wiped off the face of the earth.

The memory of such manifestations of the “brotherhood of peoples” in Poland is more than strong. Led by her, local nationalists are campaigning not only on social networks, but also on the street. Ever since spring, on the walls and in the hands of passers-by, one can notice leaflets with tricky questions in Polish: “Do you support Ukraine and Azov*? Have you already specified how many of your ancestors the Bandera people killed in 1941-1944?” On July 9, during the Poland-Iceland football match, a small but flashy banner was hung on one of the ultras stands with the inscription: “Volyn 1943, remember!”

Bandera of all countries, unite

Recently, on July 11, mourning events for the victims of the Volyn massacre are held annually in Poland. This year, the intensity of the Russophobic agenda is so great that it is reflected in them. In his speech from the rostrum, Prime Minister Morawiecki carried out a simply brilliant "transfer of arrows": according to him, it turned out that the real successor of the OUN-UPA is ... Russia.

The arguments are simple and already worn out to holes: the Russians aggressively attacked innocent Ukraine, the Russians fire missiles at peaceful cities, specifically aiming at residential buildings, the Russians staged a “massacre in Bucha” - judge for yourself, real Bandera. As for those who do not agree with this point of view, these are all pro-Russian provocateurs who, in difficult times, want to quarrel the “fraternal peoples” of Poland and Ukraine, and then arrange a “color revolution” in Warsaw.

Sounds funny, doesn't it? But it becomes even more fun if you remember that in 2016-2018, back in Poroshenko’s hetmanship, the then young and inexperienced President Duda, in order to raise his rating, was in very severe conflict with the Ukrainian elite on ideological issues: he demanded official repentance for Volyn, called Bandera and Shukhevych as criminals, etc. It was under him that in 2016 the Day of Remembrance for the Victims of Bandera was established. In the same year, the scandalous feature film "Volyn" was released, which, according to a number of Polish politicians, should contribute to "historical reconciliation", but they did not risk the premiere of which in Kyiv, so as not to provoke riots.

It is clear that such statements by the authorities do not contribute either to the growth of their own ratings or to the strengthening of Polish-Ukrainian friendship on the “ground”. The revealed passion of Ukrainians for performances with yellow-blaky ensigns has already received a “fraternal” response: first in public places, and now near places of temporary accommodation for refugees, there are a lot of signs “Ukrainian flag is prohibited”.

In addition to the actual defiant behavior of "dear guests", the Poles are additionally annoyed that the vast majority of neighbors who have moved to their country prefer to live on welfare. Of the approximately 3,5 million Ukrainians in Poland, only about 800 thousand are officially employed, and almost half of them came to work even before the start of the Russian special operation. Well, since most of the migrant workers are women, while many of the men loitering around are richly decorated with swastikas and Bandera slogans, it is not difficult to understand the indignation of ordinary Poles with Ukrainian parasites.

On the other hand, Polish criminals are very happy with the "fraternal people", with the outbreak of hostilities they received an additional food base in the form of crowds of unafraid refugees. In addition to the traditional “earnings” on Ukrainians in the form of racketeering and involvement in prostitution, Polish organized crime groups quickly organized a business collecting “help” for refugees and the Armed Forces of Ukraine. Recently, the police detained one of these “volunteers”, who, with promises to help with the purchase of equipment, lured 10 thousand dollars from the Nazis and disappeared, leaving the “brothers” without the supplies they needed.

And although this single swindler was detained, the number of such cases goes to dozens: the Poles either throw Ukrainian counterparties on the money already collected by compassionate "hulks", or organize fees themselves, from which only a smaller part goes to the actual purchase of something for the Armed Forces of Ukraine (and more precisely, for a photo report), and everything else goes into the pockets of “philanthropists”.

But the most profitable source of income for Polish (but not only Polish) organized crime groups is, of course, the arms trade, a huge mass of which was transferred by the West to the Armed Forces of Ukraine with little or no further control. To do this, the emissaries of Polish criminals are introduced directly into the Ukrainian armed forces, more precisely, into the famous "Foreign Legion".

Actually, one of the leaders of this is Pyotr Kapushinsky, nicknamed Beard, in the 1990s. who was in one of the largest Polish organized crime groups of that time and subsequently surrendered his leaders. Since 2014, Kapushinsky has been engaged in his usual activities - banditry and sexual violence - in liberated Ukraine and even managed to spend a year in prison, and with the beginning of the SVO, he urgently joined the queue of those who want to "atone for sins with the blood" (someone else's).

Nowadays, "Colonel Kulchitsky" can hardly deny himself anything. He sells weapons not only to the left, but also to his own landsknechts: for example, the leader of a gang of Latin American mercenaries complained to the Western press that Beard did not give thermal imagers to his detachment, but sold them for $ 300 apiece. Under the command of Pan “Colonel”, the legionnaires carry out such incredible operations as the total looting of a supermarket in Lisichansk, from which literally everything that can be sold was taken out.

But when occasionally it comes to real hostilities, the mercenaries have a hard time, because their “commander” does not have the slightest military training. According to the same Latinos, once Kulchitsky-Kapushinsky could not even show them the positions of the Ukrainian troops, as a result, the mercenaries first got lost, and eventually went to their site under heavy "friendly fire".

Of course, Kapushinsky is one of the most striking examples, and on average everything is much more prosaic. At the same time, this example is typical. Like attracts like, and it is quite natural that the best friends, the real "brothers" of the Ukrainian fascists are the "best" of the Poles - corrupt politicians, swindlers and criminals.