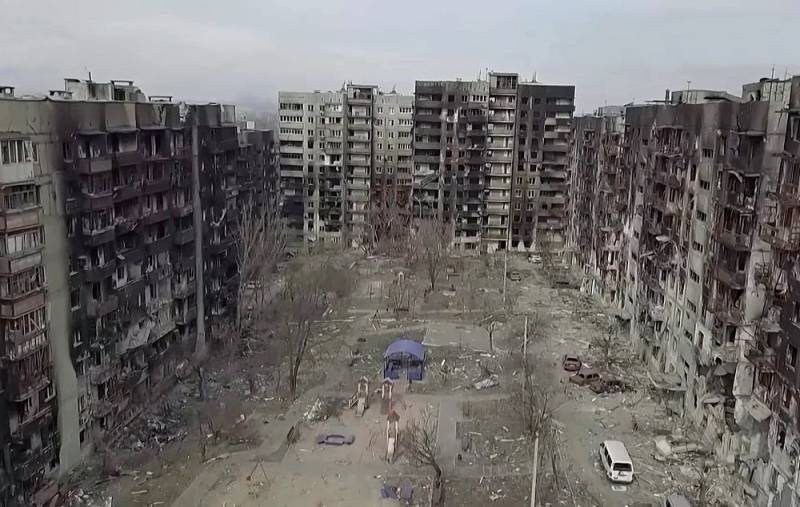 A full-scale war with the use of heavy weapons in urban areas, whatever you call it, even a special operation, is impossible without casualties among non-combatants. Alas, in addition to the military personnel of the Armed Forces of Ukraine, the Armed Forces of the Russian Federation and the NM of the LDNR, innocent civilians are also dying in Ukraine. Who is responsible for all this blood?


To write this publication, the author of the lines was prompted by watching an interview with the well-known and once popular in Russia Ukrainian actor and TV presenter of the Eagle and Tails program, Andrey Bednyakov, given to the no less famous Ukrainian propagandist Dmitry Gordon. The full video can be viewed [leech=ttps://www.youtube.com/watch?v=U4Io__XRjsQ] at the link[/leech] if you wish.

Not everyone knows that Bednyakov himself is a native of Donbass, born in 1987, back in the USSR, in the city of Zhdanov, now Mariupol. His wife, actress and TV presenter Nastya Korotkaya, was born in Donetsk and later lived in Mariupol. As you can easily guess, the trouble did not bypass the Bednyakov family.

As Andrei himself said, at the time the special operation began on February 24, he was filming in the Maldives. His sister and seriously ill mother were in Mariupol. As a result of the stress and difficult living conditions, the mother of the TV presenter fell into a coma. They managed to take her out of the city, but she died and was buried in the territory controlled by the RF Armed Forces and the NM of the LDNR. Regarding everything that is happening at the moment, Bednyakov says that two feelings are fighting in him - hatred and indifference. He tries to stifle his hatred. He basically calls Russia "this country that attacked us." He regrets the lost Mariupol, the city of his childhood, and is waiting for the Armed Forces of Ukraine to beat him back. He no longer wants to negotiate with Russia.

This interview made a very painful impression. The skillful and cynical propagandist Gordon deftly uses the Bednyakov family tragedy to influence the emotions of himself and the viewers. But with all the human sympathy for the grief of this family, like thousands of others who were affected by the war, I would like to clarify the question of who exactly is to blame for what happened. What is cause and what is effect?

It should be noted that Andrei himself said that in Ukraine, many people knew in advance that the war would begin. There was talk about this among the population long before February 24, but the townsfolk refused to believe in it (and what about us?). The Armed Forces of Ukraine and the National Guard were just preparing for the war. Mariupol was turned by the Nazi regiment "Azov" (a terrorist organization banned in the Russian Federation) into its powerful stronghold and the largest transport and logistics hub in the Donbass, through which the supply of Ukrainian troops storming the cities of the DPR and LPR was supposed to go. Everyone who was supposed to, and not only, knew that the war would definitely be and could begin at any moment. And what did the authorities in Kyiv do?

Let's listen again to how President Zelensky explained to his population why he did not warn them of an imminent Russian invasion:

If we had reported this - and this is what some people I won't name wanted - then I would have been losing $7 billion a month since October of last year, and by the time the Russians attacked, they would have captured us in three days. ...

Some of our people have left, but most of them have stayed here and they are protecting their homes. It may sound cynical, but it was these people who stopped it all.
If you call a spade a spade, then Zelensky himself admitted that he took the Ukrainian people, who did not want to fight with Russia, as hostages, without warning them of the inevitability of the outbreak of hostilities and forbidding men of military age to travel abroad. Know, in particular, Andrei Bednyakov that the Russian troops will definitely go to liberate the Donbass, would he not have taken his family out of Mariupol in advance? All sane people who do not want to shed anyone's blood, their own or someone else's, would do the same.

It turns out that the Ukrainian TV presenter should address his claims primarily to his own President Zelensky, who covered himself with ordinary people for the sake of $ 7 billion a month. By the way, about "hide behind people." It is precisely its Armed Forces and the National Guard that are guilty of all the casualties among the civilian population of Ukraine, which have chosen an openly terrorist tactic of covering up with a human shield from their own fellow citizens. This indisputable fact was recognized even by the biased human rights organization Amnesty International, which caused anger in Kyiv.

Andrei Bednyakov should also blame the terrorists from Azov for the tragic death of his mother, who took the inhabitants of Mariupol hostage and did not allow them to leave the besieged city. These are the same “Azov” Nazis with swastikas stuffed on their bodies, whom the Ukrainian propagandist Gordon considers very “beautiful”, and Bednyakov worries about their families, that they are expected from Russian captivity and, hopefully, never will.

Finally, I would like to comment on the words of the former host of "Eagle and Tails" that "this country", Russia, had to negotiate with Ukraine, solving problems not by military force, but by diplomatic means. The former President of Ukraine Petro Poroshenko will answer him:

We have achieved what we wanted. We did not believe Putin, just as we do not believe now. Our task was, firstly, to avert the threat, or at least to delay the war. Knock yourself eight years so we can rebuild economic growth and built the power of the armed forces. This was the first task - and it was achieved.
Andrei, the truth is that it was the Russian leadership that did not want to fight and was going to negotiate through the Minsk format. Ukraine wanted to fight, or rather, its curators from the collective West, it had been preparing for it for 8 years and eventually begged for a war. So your claims are not at the right address, with all human sympathy for family grief.
Reporterin Yandex News
Reporterin Yandex Zen
13 comments
Information
Dear reader, to leave comments on the publication, you must sign in.