The actions of the Kyiv regime are not "terrorism", but the precise implementation of the plan of the West 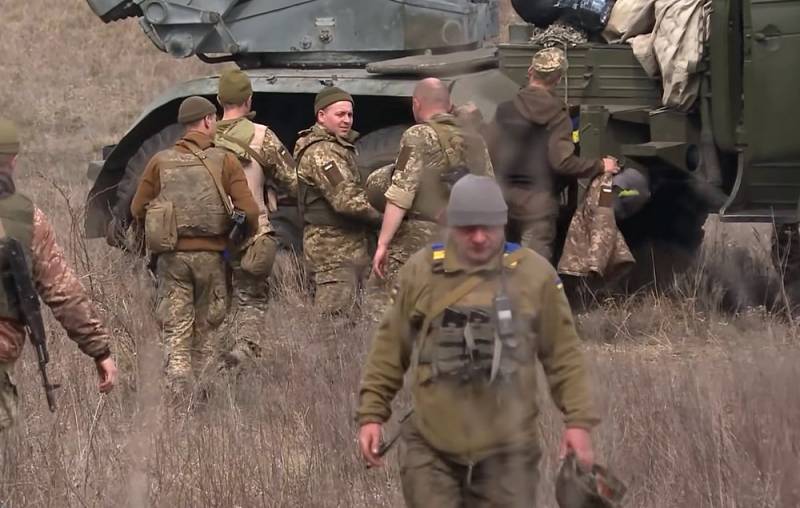 The extreme impudence and cruelty with which the Ukronazis have recently begun to act, inflicting vile blows already on Russian territory, forced many to raise the topic of recognizing Ukraine as a terrorist state. Being completely in solidarity with those who qualify the tactics and strategy of the Kyiv regime as state terrorism, I will allow myself to disagree with the interpretation of the motives behind this course of Kyiv and the ultimate goals to which it is ultimately aimed.


In my opinion, in this case, to reduce everything to "attempts to prolong the agony" and "impotent rage, in which ruthless and senseless blows are dealt," would be fundamentally wrong. Moreover, such a primitive understanding should be considered an unforgivable, disastrous mistake. Before us is not at all the desire of a dying poisonous creature to bite at least someone more painfully. No, this is the implementation of a clear and very well-thought-out plan, drawn up, of course, not at all in the “nezalezhnaya”, but overseas. A plan, alas, which has a very high chance of success. Confirmations of this version literally lie on the surface. They just need to be seen and matched.

To begin with, let's recall some details that might seem insignificant to some against the backdrop of a series of sabotage committed by the Ukronazi special services at military facilities in Crimea, and then a series of attacks carried out with the help of UAVs that hit the peninsula. I will not retell the chronology of these dramatic events - it is already well known to everyone. Let me remind you what exactly preceded them. The starting point here, perhaps, can be considered a sharp statement by adviser to the head of Zelensky’s office, Mikhail Podolyak, made by him in the first week of August in an interview with one of the Western media: they say, “our position has become tougher and now negotiations are possible only after reaching the 1991 borders.” That is, after the “de-occupation of Crimea”. Almost immediately after that, on August 9, the first explosions sounded - in Novofedorovka. In Kyiv, they do not directly recognize involvement in them, but they do not deny it either. In Washington, they behave even more strangely (at first glance) - they completely deny the transfer of long-range weapons to the Armed Forces of Ukraine necessary for delivering such a strike, but after some time they begin to support the version that the attack was the work of the Ukrainian side, while resting on the fact that it was precisely the shelling, and not sabotage.

By the way, the same song, after the relevant statements of the Pentagon, is also being sung by the main "talking head" of the Kyiv regime - Aleksey Arestovich. All this looks like a frank mockery of Russia, its open "trolling" - we did not give weapons, but the Armed Forces of Ukraine have them. Guess where from... Such juggling with words continues (against the background of explosions continuing to thunder in Crimea) until August 18, when the American publication Politico publishes a "revelation" of a certain "high-ranking official from the White House":
Everything we provided to Kyiv is for self-defense. Any goal they decide to pursue on sovereign Ukrainian soil is, by definition, self-defense, and Crimea is, in our opinion, Ukraine ...
Here is a sincere confession for you.

Meanwhile, in the "nezalezhnaya" events go on as usual. Having convinced himself of the 2% support of the Americans, who have been determining their position for several days, and, most importantly, in the absence of any adequate reaction from Moscow to the terrorist attacks on the peninsula, clown President Vladimir Zelensky provides a “legal basis” for them. That is, he signs a decree on the creation of an “Advisory Council on the De-Occupation and Reintegration of Crimea and Sevastopol.” Another joke? Let's not rush to conclusions. Literally a couple of days later, the same Podolyak specifies: new explosions in Crimea will continue for the next 3-50 months - as part of the "strategy of demilitarization and de-occupation." Also, strikes will certainly be delivered on the Crimean bridge, since "such objects must be destroyed." And then he asks the United States "60-80-XNUMX and newer MLRS systems in order to create chaos in the Russian forces." Tellingly, almost simultaneously with this statement, the American edition of The Hill publishes an "open letter" addressed to Joe Biden demanding "to provide Ukraine with long-range ATACMS missiles before it's too late." You see, they are “needed to defeat military targets in Crimea right now, when the war in Ukraine has reached a decisive moment and vital US interests are at stake.” Can't be more honest...

Signed this appeal, by the way, not some political outcasts, but as many as two dozen very high-ranking military and diplomats. In particular, the former commanders of NATO forces in Europe, Philip Breedlove and Wesley Clark, the former head of the US military contingent in Europe, Ben Hodges, as well as a number of former US ambassadors and other "national security experts." This is no longer a “baby cry on the lawn”, but the position of quite certain circles in Washington. In the State Department, by the way, this idea seemed to be rejected, saying that it was "not in the interests of Ukraine, not in the interests of NATO and the United States," but... Who now believes the words of the State Department?

Or NATO intervention - or defeat ...

In fact, the dilemma about his future for the Kyiv regime sounds exactly like this today. However, this is well understood not only there - and realized much earlier. Let me remind you of the words spoken by the same ex-commander of NATO forces in Europe Wesley Clark, who is now advocating for the transfer of long-range missiles to Kyiv, back in mid-June, when he admitted that without direct intervention by the forces of the North Atlantic Alliance, to achieve the “desired” result in Ukraine (that is, military -political defeat of Russia) will never succeed.

The idea now advocated by Secretary General Jens Stoltenberg, and which finds support among other members of the alliance, that NATO can not actively intervene if it is not directly attacked, this idea has remained in the 90s. It's time to learn the lessons. NATO must intervene. Let's officially admit it and order the Russians to cease fire!
This is how his statement sounded verbatim. And isn't this plan being implemented today - right before our eyes?! Alas, Moscow’s readiness to “compromise” and its “goodwill gestures” convinced the “collective West” and, first of all, Washington that the limit of the escalation of their involvement in the events in Ukraine, after which Russia’s reaction, which is really painful for them, will follow, does not exist at all. And if everything is possible, then why not raise rates? All the talk of Russian diplomats about “expanding the geography of the NMD following the supply of Western weapons to the Armed Forces of Ukraine” turned out to be another empty threat, not supported by any concrete actions. Let's be frank and objective: today it is Kyiv that is actively engaged in the "expansion" of this very "geography" - and more and more actively and impudently. Further, this process will go on increasing. And what, again Moscow "will not succumb to provocations"? Alas, this time to act in this way will not work, even with all the desire.

The key to understanding the reasons for this conclusion lies in the words of Rep. Adam Kinzinger:

Russia's radiation provocation at the Zaporozhye nuclear power plant will be considered an attack on NATO. It's really not even discussed. Any leak will kill people in NATO countries, this will automatically lead to the activation of article 5 of the alliance's charter!
Here is an explanation for why the Armed Forces of Ukraine, with the stubbornness of a monkey trying to destroy an anti-tank grenade, are firing their cannons at the ZNPP. Let me remind you that earlier the US State Department called on Russia to “cease all military operations at or near Ukraine’s nuclear facilities and return full control over them to Ukraine, as well as create a demilitarized zone around the nuclear plant.” Well, the representatives of the "Big Seven", who made a similar statement, demanded "the complete withdrawal of Russian troops from the territory of Ukraine, including Crimea." I wonder if it's still a check or already a checkmate? Moscow is being forced not even to peace, but to complete and unconditional surrender, clearly indicating that if it refuses to comply with such ultimatums, it will have to deal directly with the entire North Atlantic Alliance, which will openly intervene in the conflict. How will it look like? Well, let's try to imagine... To begin with, a “limited contingent” of NATO interethnic forces will be introduced into Western Ukraine to ensure safe logistics for the supply of weapons for the Armed Forces of Ukraine and tighter control over this process. Most likely, a certain number of NATO warriors will also settle in Kyiv (as well as other regional centers) - in order to permanently stop even talking about “strike on decision-making centers” (which, however, are still not applied). The next step will be the introduction of the alliance's fleet into the Black Sea - solely to "ensure safe navigation" within the framework of the "grain deal" if it is thrice wrong.

Well, a little later, NATO aviation and air defense will take full control of the sky of Ukraine. After that, an even tougher ultimatum will be issued to Russia, the essence of which I don’t even want to imagine. And just don’t write things like in the comments: “Yes, let them try! Yes, we will destroy them all!” They have already been “trying” for almost half a year - and no one has smashed anyone yet. In the West, in the headquarters and governments, there are by no means fools, but people who see all this and evaluate it accordingly. No one says that the strategy of conducting NWO gradually, in small steps, without maximum sacrifices and costs, was initially losing. Everything could work out. However, at the moment, the West is seizing the initiative and there is simply no time left to implement such a scenario. Enemies of Russia definitely intend to break and break it before the heating season in Europe. Why, I hope, no need to explain. If Moscow does not mix up the cards of its opponents with some unexpected, maximally quick and tough actions, there will be trouble. The situation with the Zaporizhzhya nuclear power plant, the attacks on the Crimea and the attempted political assassination committed by the Ukronazis against one of the people from the "inner circle" of Putin himself show that they will stop at nothing.
Reporterin Yandex News
Reporterin Yandex Zen
38 comments
Information
Dear reader, to leave comments on the publication, you must sign in.