Is the American Civil War imminent? 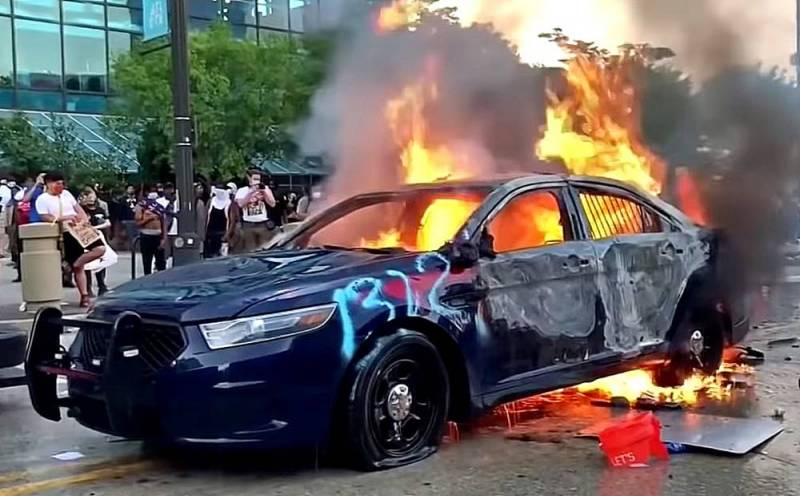 After the well-known events with the so-called storming of the Capitol in 2021, the Western press was actively discussing the prospects for a possible civil war in the United States. Tabloids, small media and bloggers whipped up panic and looked for facts and signs that speak in favor of a fundamental split in American society, but the mainstream large media, representatives of what they call “quality journalism”, were more restrained in their assessments and even ridiculed their more "yellow" colleagues.

On August 20, 2022, "one of the most prestigious" Western newspapers, The Guardian, published an article stating that the threat of a new civil war in the United States "no longer seems like the ravings of a madman."

The material says that Americans are actively stocking up on weapons before the upcoming elections, that half of Americans expect a civil war in the next few years, that 20% of Americans believe that political violence is justified in some circumstances, and 40% are willing to give up democracy for a strong leader.

Stirred up the American Internet news FBI raids on Trump's estate, triggering nothing less than a flurry of threats of violence against officials. The US Department of Homeland Security said that among them were calls not only for the execution of FBI agents, their families and the judges who issued the search warrant, but also for "civil war" and "armed insurrection."

In addition, the story of Navy veteran Schiffer, who carried out an armed attack on the FBI office and was shot dead, was received with hostility on the American Internet. His threats to "slaughter" federal agents - "the scum of the police state" and "SS men" - received a lot of positive feedback from the most radical Americans.

And since the Internet has become the great barometer of society today, the conclusion from all this is that the American people are losing faith in democratic institutions and in the existing state system.

True, The Guardian blames the Republicans for everything, "undermining the electoral system and weakening confidence in democracy." Moreover, it is argued that Trump, violating all the rules of democracy, relies, among other things, on well-armed groups of white nationalists, infects the armed forces and the veteran community with his ideology. Moreover, the American branch of the English newspaper scares readers with the fact that if they vote for Trump, the level of violence will increase dramatically, and if they vote for Biden, “everything will be even worse.”

Are 3-5 million well-armed opponents of the government enough for a civil war?

That is how many dissatisfied Americans counted The Guardian with the help of involved experts. The whole point of the material's forecast is based on the fact that American society is electrified, full of discontent and unrest, while the most radical opponents of the government are well armed and ready to act. But, I think, journalists interpret the classics too wrongly: "The universal faith in the revolution is already the beginning of the revolution."

One can, of course, naively believe that Western mainstream left-liberal journalism is fulfilling its high duty to society, has figured out the situation and is trying in good faith to warn of an impending catastrophe. But something tells us that once again they are throwing dust in our eyes, and the American public is shockingly persuaded to be content with the current political system, so that, God forbid, “deadly chaos” does not happen, as The Guardian writes.

At the end of January 2022, I already писал about the necessary and sufficient conditions for a civil war in the United States and pointed out that the consensus of almost the entire American society on the admissibility and desirability of maintaining the world hegemony of the American empire is the main factor that unites business, government and people.

A big fight for a change of persons in power, a redistribution of power, a reform of the political model is, of course, possible, but, unfortunately, it will not become a civil war. There are no progressive political forces in the USA that would directly and unambiguously oppose American imperialism. And all the rest of the dissatisfied, dissidents, loudmouths, troublemakers and the rest of the violent, albeit armed to the teeth, will never go into a “decisive battle” against the American government if the prospect of US defeat in a new Cold War looms. Trump and Pompeo largely unleashed this war with China, and Biden and Blinken added Russia to it to increase the internal stability of a battered American democracy. In the United States, as in a real empire, domestic politics are absorbed by foreign ones, they are inseparable and represent a single process.

What can really plunge the US into a civil war?

If we discard the prospect of the formation in the United States of a social force ready to abandon economic benefits, from the dominance of American capital in the world with its leaders and a revolutionary program of action against the state, the only thing that will put America on the brink of civil war is the "crisis of the tops", the failure of the government itself.

Now it is customary to laugh at the American gerontocracy, they say, two old men - Biden and Trump - have played tricks on things. Let young and fresh forces come, America will become more adequate.

Let's say K. Harris comes, who is famous not only for strange speeches with a meaningless set of words, but for much more aggressive statements against Russia and China.

Pompeo will come, who has already divided the whole world into two camps and advocates the most consistent conduct of the Cold War, direct confrontation of the West with China and Russia.

Imperial Russia, communist China and jihadist Iran pose an existential threat to us and to free peoples around the world. The reality of who they are and what they are is clearly visible in the mass graves in Bucha and the concentration camps in Xinjiang. This clash of civilizations is a classic struggle between light and dark, good and evil, right and wrong. We don't need to look beyond the streets of Mariupol, Hong Kong and Tehran for evidence.
Somehow, against the background of such prospects, the “power of the old people”, who at least remember the atmosphere of the Caribbean crisis, the Shield-82 exercises and the Reagan Doctrine, does not seem to be the worst option. At least with both of them, everything is generally clear, their actions and decisions are more or less predictable.

Strictly speaking, the personality of the president and the configuration of the parties in Congress do little to decide the real politics of the American state. The dominant force in American democracy is corporations, primarily earning on the military-industrial complex, while the White House and Congress are in fact only a headquarters, an office that develops ways and means to defend their interests. The American people, with all their seethings and problems, is a background that is taken into account, but only for reasons of fear that the whole structure may collapse.

The failure of any government is possible due to the deepest political crisis, when several powerful groups fight for power. But in the United States, despite all the militancy of the struggle between Republicans and Democrats, nothing of the kind is observed. These two parties have the same sponsors and beneficiaries, so Trump, who lost the dishonest election, humbly went into opposition, waiting for the next chance. Therefore, nothing indicates the prospect of such a development of the situation.

The failure of the government is also possible due to the deepest economic crisis, when the state will be on the verge of default, the market economy will be captured by the greed of private owners, and the standard of living will collapse. Such a prospect is quite real if the role of the dollar in world trade continues to decline, and the US budget deficit continues to grow. And in part, the American economy is now heading straight for a similar collapse. The United States is helped out by the gas expansion to Europe, which they organized by imposing anti-Russian sanctions. But in the face of declining efficiency of the dollar, the government needs to somehow replenish the budget from private profits, including oil and gas giants, and for this, drastic measures will have to be taken. If the situation in the world develops in the same vein, the US authorities will face the question of reforming the economic model by either raising taxes or nationalizing oligarchic profits. And these are very painful decisions both from the point of view of ideology and from the point of view of the interests of private corporations.

In short, the situation is developing in much the same way as it was during the Great Depression. If a conditional Roosevelt is found in the United States, then the crisis of power will be avoided, but if momentary greed and liberalism prevail, then the prospect of government failure is quite possible.

However, even the bankruptcy of power in the United States will not mean the automatic start of a civil war, it will only create a prerequisite for it.
Reporterin Yandex News
Reporterin Yandex Zen
11 comments
Information
Dear reader, to leave comments on the publication, you must sign in.