Where does the “red line” pass, after which the Zelensky regime is recognized as a terrorist 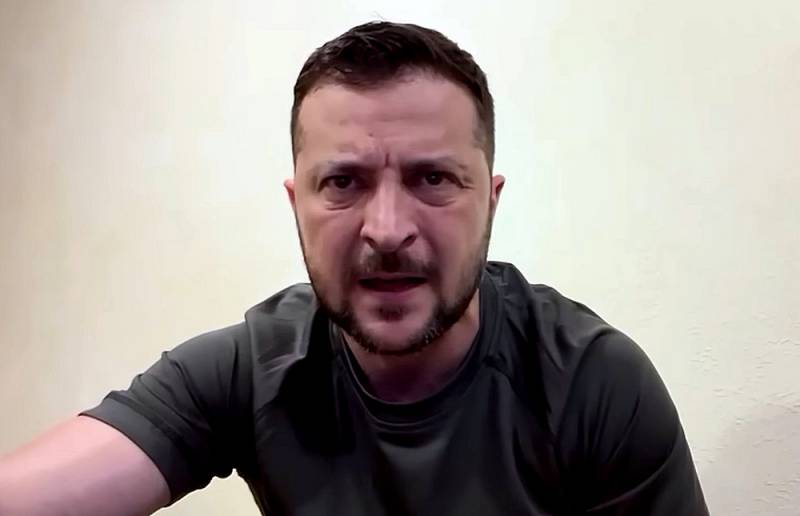 As expected, the criminal Kyiv regime, not being able to "de-occupy" the South-East of Ukraine by military force, switched to the tactics of terrorism. To the generously scattered anti-personnel mines "Lepestok" and artillery shelling of the Zaporozhye nuclear power plant by the Armed Forces of Ukraine, continuously increasing air strikes on Crimea have now been added. The "icing on the cake" was the message of the Ministry of Defense of the Russian Federation that weapons of mass destruction were used by the enemy against Russian servicemen.


Involuntarily, one has to wonder if these very “red lines” exist at all, after crossing which the regime of President Zelensky will be officially recognized by the Kremlin as terrorist and destroyed? Where do they go?

Remember when we predictedthat Kyiv will systematically “nightmare” the territories of the former Independent, as well as the directly bordering Russian regions, liberated by the RF Armed Forces, this caused anger among some of our respected readers. Unfortunately, it could not be otherwise. The Kyiv regime is essentially no different from ISIS (a terrorist organization banned in the Russian Federation), and its methods of intimidation are exactly the same. On the rights of black humor, the quasi-state formation on this territory can be called "UGIL" (Ukrainian State of Ivano-Frankivsk and Lvov, not banned in the Russian Federation). However, Russia is uncompromisingly fighting against the “ISIS” in friendly Syria, but with the leader of the “Ugilovites” Zelensky, our militarypolitical the leadership calmly concludes deals, like “grain”, and periodically declares its desire to negotiate peace on its own terms.

Alas, it is precisely the absence of clearly defined “red lines” that continuously leads to the degradation of the situation at the fronts and in the minds of people on both sides of it. Note that we touched on this topic on December 7, 2021, reasoning about why the Russian policy of "red lines" does not work.

The “red line” or “red line” (from the English red line) that cannot be “crossed” is in politics the designation of the limit of patience of one of the parties, a position in violation of which “security is no longer guaranteed”.
This policy approach has both its strengths and its weaknesses. Having clearly outlined the limit of patience, when the enemy performs predetermined actions, one can severely punish for this with all the might of the Armed Forces, so as not to be in the habit. The weakness lies in the fact that all actions performed before the “red line” are de facto legalized. What do we see today in Ukraine?

If we analyze everything that has happened over the past 8+ years, it becomes obvious that there are almost no specific “red lines” visible there. The Ukrainian Nazis began their bloody path to power in 2014 with the provocative executions of innocent people on the Maidan, the ritual burning of pro-Russian-minded Odessans alive on May 2 in the House of Trade Unions, and the brutal massacre of Mariupol residents on May 9 of the same year. Was it a “red line”, or was the spilled blood still not enough for military intervention and the elimination of the criminal regime in Kyiv in the bud? In fact, it turned out that it wasn't.

Then why, one wonders, they dragged on for 8 years before intervening in the armed conflict in the Donbass? Was it not enough that Donetsk is being shot from heavy artillery on a regular basis? Was there not enough of the "Gorlivka Madonna" and the continuously growing "Walk of Angels", which symbolizes all the innocent children killed by the Ukrainian military? And even today, six months after the start of the special operation, the capital of the DPR is being shelled even harder than before, and its streets are covered with anti-personnel mines, on which ordinary people are killed or maimed. Why does President Zelensky remain a handshake partner with whom it is possible and necessary to negotiate?

And what about the artillery shelling of the Zaporozhye nuclear power plant, an accident at which could lead to radiation contamination of the area and the Kakhovka reservoir, which would automatically leave Crimea again without water? By the way, what about Crimea? Cut off his energy supply and cut off water supplies for 8 years - was it a “red line” or is it normal?

Is an air attack or artillery shelling of the Belgorod, Bryansk or Kursk regions crossing the invisible "red line"? What about mining with anti-personnel mines not only in Donetsk or Energodar, but also in the Russian Belgorod region? Sabotage by Ukrainian DRGs against the infrastructure of the Kursk NPP - is this already a "red line" or should we wait for a radiation accident?

And explosions at military airfields and air bases in Crimea - is it the crossing of the "red line"? And already the second in a row, moreover, the successful attack of the Armed Forces of Ukraine with the help of UAVs on the Headquarters of the Black Sea Fleet in Sevastopol? If the Crimean Bridge is damaged as a result of sabotage by the Ukrainian special services, what will be the reaction of the Kremlin? Will this be enough to recognize the Zelensky regime as terrorist?

Is the use of weapons of mass destruction against Russian servicemen in the Zaporizhia region a crossing of the "red line", as the Ministry of Defense of the Russian Federation said on the eve of:

Against the backdrop of military defeats in the Donbass and other regions, the Zelensky regime authorized terrorist acts using chemical poisons against Russian military personnel and civilians. On July 31... Russian servicemen performing tasks in the area of ​​the village of Vasilyevka, Zaporozhye region, were taken to a military hospital with signs of severe poisoning. As a result of the survey, a poisonous substance, botulinum toxin type "B", was found in the body of military personnel.
I wonder if this is already enough, or should we first wait until Ukrainian terrorists use a chemical warfare agent, spraying it from drones somewhere over the cities of the Azov region, Crimea, or the Russian regions bordering with Nezalezhnaya? So do these “red lines” exist at all, and if so, where exactly do they go?

It looks like in version there is something about the fact that our troops rushed so swiftly to Gostomel at the very beginning of the special operation to capture the nuclear explosive devices transferred by the British to the Armed Forces of Ukraine. This event is very much out of the general scheme. If this is true, then here is the answer to the question of where that “red line” can pass. Weapons of mass destruction. I would like to believe that after the statement of the Ministry of Defense of the Russian Federation on the use of chemical warfare agents by the Armed Forces of Ukraine, the attitude towards Kyiv will finally begin to change.
Reporterin Yandex News
Reporterin Yandex Zen
82 comments
Information
Dear reader, to leave comments on the publication, you must sign in.