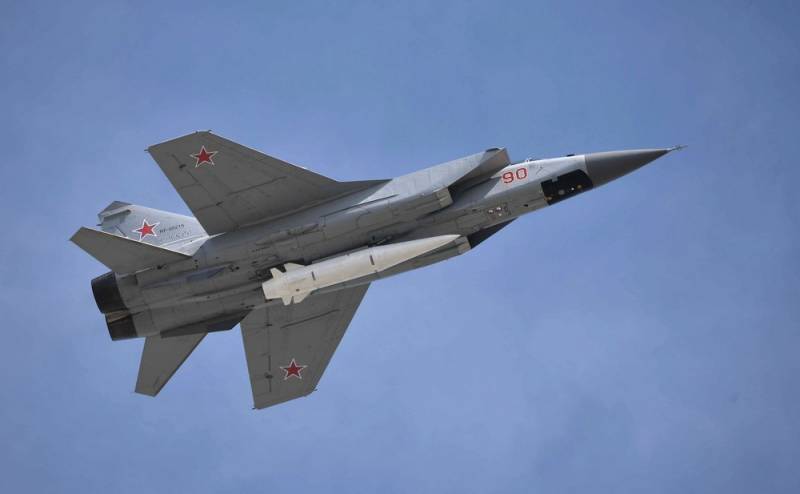 According to domestic media, the Russian Defense Ministry has again transferred carriers of the Kinzhal hypersonic missiles to the Kaliningrad region. Three MiG-31K supersonic fighter-interceptors at once, specially converted for this purpose, were deployed at the Chkalovsky airfield, which caused concern among Russia's Eastern European neighbors from NATO. But what can really change just three obsolete aircraft carrying one hypersonic missile on a suspension?


The press service of our defense department stated the following verbatim about this:

Today, August 18, 2022, as part of the implementation of additional strategic deterrence measures, three MiG-31 aircraft with Kinzhal hypersonic missiles were relocated to the Chkalovsk airfield in the Kaliningrad region.
The 9-A-7660 Kinzhal or Kh-47M2 Kinzhal is Russia's first air-launched hypersonic missile system, whose main advantage is that it cannot be intercepted by existing missile defense systems. The unique speed of 12 km/h of this aeroballistic missile is provided by the Mig-345 supersonic fighter-interceptor, which actually performs the function of the first booster stage, launching in the upper, more rarefied layers of the atmosphere. Especially for this, the outdated MiG-31M was turned into the MiG-31K, which lost the ability to carry other standard weapons, except for one missile on a suspension.

The flight range of the Russian hypersonic missile is 2000 kilometers. She has a truly enormous kinetic speed, which allows her to destroy even highly protected objects, such as bunkers and command posts. Thus, the "Dagger" was successfully tested during the hostilities in Ukraine, literally laying down the ammunition depot of the Armed Forces of Ukraine in the Ivano-Frankivsk region, arranged in a former nuclear bunker at great depths. Also, large surface ships, such as aircraft carriers or US Navy amphibious assault ships, are called priority targets for these hypersonic air-launched missiles. It is believed that they will not be able to either escape from the blow or defend themselves. The problem will be only in targeting such a moving target.

In general, the "Dagger" is indeed a very serious weapon. The question is, what can really change just three MiG-31Ks, carrying only one irresistible missile that does not even have a special warhead?

In some domestic media, it is pointedly calculated that the flight time of London's rocket is approximately 7 minutes. However, in the UK, this hypersonic missile is unlikely to ever be used. The United Kingdom is itself a nuclear power, its strategic nuclear submarines are constantly on alert with Trident-2 intercontinental ballistic missiles on board. The war between Russia and Britain, if it ever happens, will be nuclear, and the island will be a target for the Strategic Missile Forces and the submarine of our Northern Fleet. The carrier forces of the US Navy are also unlikely to become a target for the "Dagger" from the Kaliningrad region, since in the event of a real mess, the Americans themselves will not poke their nose into the Baltic, substituting their European vassals in their place.

A more realistic task for Russian hypersonic weapons is precisely the strategic deterrence of the activity of the Eastern flank of the NATO bloc against the backdrop of the conflict in Ukraine. Scenarios are not ruled out in which Poland, Romania and Hungary will want to use a unique historical opportunity and try to return their former territories, which are still part of Western Ukraine. Russian troops with the allied forces of the People's Militia of the DPR and LPR are now bogged down in the Donbass. Whether the official Minsk wants to directly get involved in the conflict, introducing the Armed Forces of the Republic of Belarus into the territory of Volyn and Galicia, is a big question. Using nuclear weapons to stop the Europeans would be overkill.

In this context, only three hypersonic missiles, albeit with a conventional warhead, but absolutely irresistible, are quite a weighty argument. Elements of the American Aegis system deployed in Polish Redzikovo and Romanian Deveselu can be chosen as priority targets. For each of these facilities, one "Dagger" will be quite enough, which will instantly reduce the missile defense potential of Eastern Europe. Also, NATO command centers can be priority targets for Russian hypersonic missiles.
Reporterin Yandex News
Reporterin Yandex Zen
23 comments
Information
Dear reader, to leave comments on the publication, you must sign in.