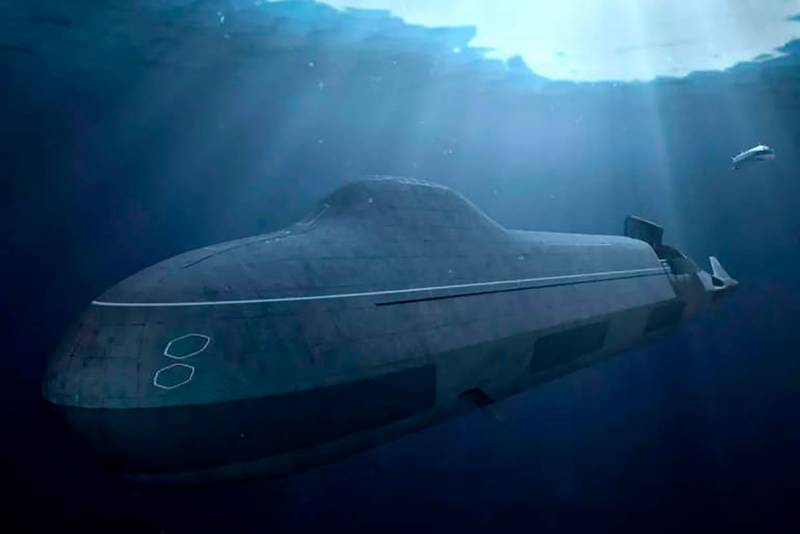 At the Army-2022 International Forum, a concept project of a promising Russian nuclear submarine under the atypical name Arctur was presented to the general public. Its no less unusual outlines attracted the increased attention of Western military experts and observers, who saw the submarine as a "threat to NATO." When is it realistic to expect the replenishment of the submarine of the Russian Navy with this promising new product?


What is known today about the Arcturus project? This is a promising strategic nuclear submarine, which in the future may replace our Borei. The length will be 134 meters, width - 15,7 meters, the crew - about 100 people. The displacement of nuclear submarines is 20% less than that of modern SSBNs, but its hull will be noticeably wider. The submarine was created using of technologies reducing visibility, its contours have a "faceted" shape. Stealth should become one of the main trump cards of the Russian submarine, a representative of the Rubin Design Bureau explained:

The new faceted shape of the Arcturus contours, together with a reduction in the size of the ship and a promising active coating, reduces the reflected sonar signal and reduces the detection range of the boat. The use of a distributed shaftless power plant with full electric propulsion helps to reduce noise, and the presence of two propulsion units increases the maneuverability and reliability of the missile carrier.
In a conventional nuclear power plant, the reactor generates heat, which is generated by steam that turns a turbine, which in turn turns a propeller shaft. On the Arcturus, the turbine will generate electricity, which will be fed to an electric motor that rotates the propeller. Such a scheme is necessary to reduce the number of rotating and rubbing mechanisms that give out a submarine with the sound of their work.

Particularly interesting are the weapons that are supposed to equip the Arcturus. Instead of 16 intercontinental ballistic missiles, the submarine should carry only 12. Apparently, this will be a modernized version of the R-30 Bulava ICBM, which our Boreys are armed with. A smaller number of missiles should be compensated by their greater power and ability to overcome the enemy's missile defense system. It is also possible to equip the Arcturus in any modification with Zircon-type hypersonic missiles.

In addition to terrible nuclear missiles, the promising submarine will be able to carry several controlled uninhabited underwater vehicles - Surrogate and Juno. The Surrogate will be equipped with a large conformal array sonar, water jet propulsion and a non-acoustic enemy submarine detection system. Its task is to search for targets as a “faithful wingman” and aim the Arcturus or other means of destroying ships and submarines of the Russian Navy at them. "Juno" is a deep-sea research vehicle capable of descending to 1000 meters to survey the seabed, perform rescue and security operations.

All this impressed the British columnist Tariq Tahir so much that he involuntarily remembered the James Bond films:

Russia has unveiled its most advanced stealth submarine, the Arcturus, equipped with 12 nuclear missiles and drones, to warn the West. The new boat is named after the brightest star in the northern celestial hemisphere, suggesting it is designed to operate in the Arctic... The Arcturus has a Bond-villain-style bay to launch underwater drones aimed at destroying enemy submarines. But the most striking thing about the design is that it has a sloping outer hull with sloped sides and flowing lines.
Indeed, Mr. Tahir quite accurately noted that the composition of the weapons of the nuclear submarine and its name in honor of the brightest northern star Arcturus hint at the region where it will operate. SSBN "Arktur", if built, is intended primarily for the needs of the Northern Fleet of the Russian Federation. That's just really waiting for her appearance is still very far away.

The concept project, demonstrated in the form of a layout, is just the very first stage when it is decided how much it can really be in demand. A number of key technologies that are embedded in Arcturus simply do not exist yet. We do not have intercontinental ballistic missiles that would fit into the reduced hull of nuclear submarines and correspond to the declared tactical and technical characteristics. So far, there are no more powerful and at the same time compact nuclear reactors. There are no “hardware” and corresponding underwater drones. "Surrogate" is an initiative development, currently representing a "torpedo" with a length of 17 meters and a displacement of 40 tons. It will not fit into the dimensions of the Arcturus hull, it needs to be improved. The Juno underwater robotic system is also under development.

If the concept project of a promising submarine still receives approval, a realistic new SSBN can be expected in the ranks of the Russian Navy in a decade and a half to two decades.
Reporterin Yandex News
Reporterin Yandex Zen
7 comments
Information
Dear reader, to leave comments on the publication, you must sign in.