October 10 2018
0
The British newspaper The Sun published material in which it accused Russia of striving to send troops to Libya. Thus, according to the publication, Moscow will turn this country into a "new Syria." 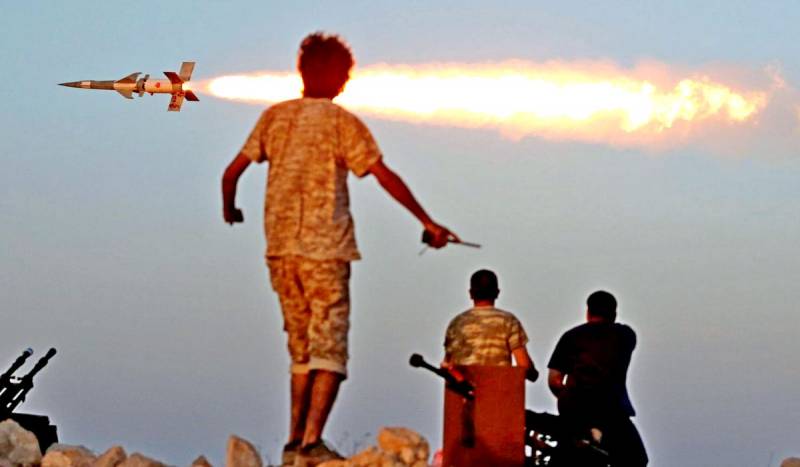 The purpose of such steps in Russia, as stated in the material, is to establish control over the largest route through which illegal migrants enter the EU countries. By controlling these flows, Moscow would be able to destabilize the situation throughout Europe.

If Moscow takes control of the country's coastline, this could trigger a new wave of migrants crossing the Mediterranean Sea
- said the British tabloid, referring to some sources.

According to them, the Russian Prime Minister Teresa May has already warned about these Russian “intentions”.

If you believe the material, Russian President Vladimir Putin is doing in Libya almost the same as before - in Syria and the Crimea. He has noticed an “uncontrolled space” and wants to use it to influence the West. As for the European countries, they are very vulnerable to the threat of large migration flows. Another threat is the oil crisis, which may arise due to the situation in Libya.

And in order to back up his reasoning with at least some facts, the tabloid pointed out that dozens of GRU officers, Russian special forces are in the east of Libya. And in cities such as Benghazi and Torbuk, fighters of the private military company Wagner operate - they allegedly have several military bases under their cover. And Moscow allegedly deployed S-300 and Caliber missiles in Libyan territory. Bet is being made on Khalifa Haftar, the leader of the Libyan national army. It was his Russian side, according to the assurances of the newspaper, that he supplied arms (however, they had written about the connection between Moscow and this figure in the West before).

In Russia itself, the publication of The Sun is considered disinformation. The Russian Foreign Ministry has repeatedly stated that our country does not support any of the Libyan conflicting parties. Moscow would like the contradictions between them to be resolved through dialogue.

According to Lev Dengov, the head of the Russian contact group to resolve the Libyan crisis, Russia is "equally close" to all the forces operating in this country. To bring order to it, it is necessary that external players agree, and the consolidation of Libyan tribes is also necessary. His words are quoted by the newspaper Gazeta.ru.

For his part, the chairman of the Committee on Foreign Affairs in the Federation Council, Konstantin Kosachev, called the publication in The Sun delusional.

It is quite obvious that Russia has never acted like this and is not going to act in the future. The problem of mass immigration is a global problem that humanity has been addressing for a long time, consistently. Russia is actively participating in relevant programs to combat illegal immigration, because we ourselves, in the end, are held hostage to this problem, and sometimes a victim of the relevant processes.
- said Kosachev.

Meanwhile, the British Parliament really believes that Russia's intentions regarding Libya pose a threat to which the United Kingdom must respond. Tom Tagenhate, head of the international committee of the British Parliament, accused Moscow of seeking to open a “new front” in Libya against the West.

In connection with all this, it should be noted that in ten days it will be 7 years since the death of the leader of the Libyan Jamahiriya Muammar al-Gaddafi. He was brutally murdered with the participation of NATO countries. Shortly before the overthrow and death of the Libyan leader warned that his country is a barrier to many illegal migrants who seek to get from Europe to Europe. If this barrier is broken, the flow of refugees will be uncontrollable. Gaddafi’s warnings, which was sentenced to death by the West, no one listened. And when they came true, western politicians I categorically do not want to admit my own criminal errors. It’s easier to blame someone else, even Russia.
Ctrl Enter
Noticed oshЫbku Highlight text and press. Ctrl + Enter
We are
Take front row seats: US and China begin battle for Russia
Putin - Trump: why we have already won
Reporterin Yandex News
Read Reporterin Google News
Ad
We are open to cooperation with authors in the news and analytical departments. A prerequisite is the ability to quickly analyze the text and check the facts, to write concisely and interestingly on political and economic topics. We offer flexible working hours and regular payments. Please send your responses with examples of work to [email protected]
Information
Dear reader, to leave comments on the publication, you must sign in.