Nazism is advancing: what will be paid for every day of delay of the NWO 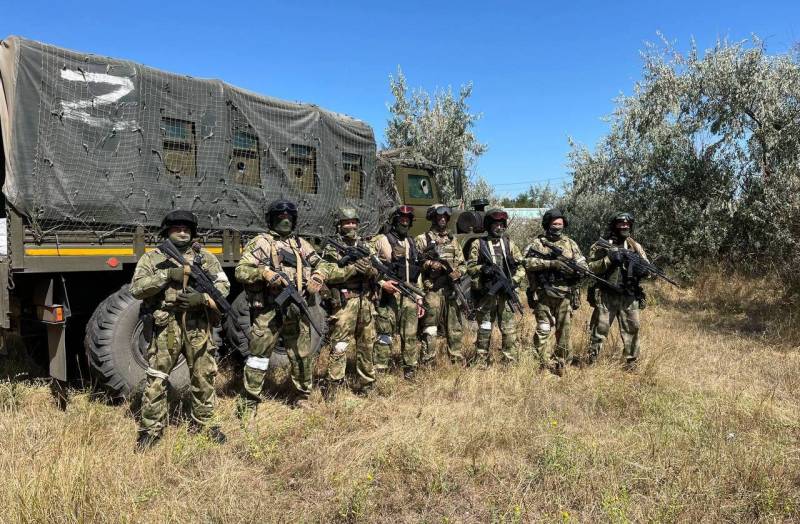 This text can be considered a continuation of the article of my esteemed colleague on the topic of whether Russia is expected in the Ukrainian territories now controlled by Kyiv. Its development, so to speak, from the point of view of a person who is still on the other side of the “front line” of the NWO. And further we will talk about what colossal efforts are being made by the Ukronazi regime precisely so that by the time the special operation (whatever it is) is over, no “pro-Russian citizens” would remain on this earth in principle.


Believe me, as of now, they really are - the most "conspiratorial", gone into a deep "internal underground", often even from closest friends and their own relatives. In the hell that Ukraine has turned into today, it is incredibly difficult for them to maintain not only a positive attitude towards a country that, one way or another, is fighting in the territory where they live, but also elementary sanity. However, many succeed - against all odds. Another thing is that every day such people, alas, are becoming less and less. Let's try to figure out why.

Everyone will be "poisoned"

Let me begin by reminding you of the “programmatic” statement I have already made on another occasion by Oleksiy Danilov, Secretary of the National Security and Defense Council of Ukraine. The very one where he admits his desire to “check all Ukrainians” for their cooperation with the Russians, or at least the presence of sympathy for them. Pan Danilov refers to such "renegades" only as "moles" and "rats" who must be "poisoned" mercilessly. Until there are none left. On the one hand, this indicates that the top of the Ukronazi authorities are well aware that the very “incredible unity” and “universal patriotism” of the Ukrainian nation, about which they scream at every corner, is nothing more than a myth invented by them. Those who do not agree and do not want to turn into Nazi zombies are more than enough.

On the other hand, the outpourings of a high-ranking official are not at all a manifestation of his personal vile emotions and cannibalistic inclinations. Before you is a specific program, in accordance with which all the forces subordinate to the Kyiv regime are, unfortunately, very active and consistent. And if it says "everyone", then it is in this vein that the watchdogs of power carry out their terror. For example, the recent "cleansing" of Nikolaev, allegedly undertaken to search for "enemy spies" and "fire spotters", was really total. The city was tightly closed to the exit, a curfew was announced in it - after which groups of "checkers" moved to the homes of residents, entering literally every apartment. The chairman of the Nikolaev Regional Council, Anna Zamazeeva, spoke with pleasure about such a “wonderful” event: “They go straight to the apartments - they check everyone, they check documents and mobile phones - they check everything ...” What in this case was meant by the word “everything” - just studying the list of contacts in messengers and social networks found on smartphones and computers, or a complete raid up to digging into personal belongings, the official did not explain. Obviously, in each case an individual approach was applied.

But Zamazeeva very transparently made it clear that those suspected of cooperation with Russia may well expect extrajudicial reprisals:

There are collaborators and separatists, we cannot say that there are many of them, but the case is divided into three stages. The first is to find them, then condemn them and not allow them to go out on bail, because our people are ready to commit lynching against them. All those who suffered, their neighbors, relatives and relatives, whose houses were damaged, whose peaceful life was destroyed, they transfer their anger to the collaborators.

What is this, as a completely unambiguous "announcement" of future lynchings? By the way, in the same Nikolaev, a certain Yuriy Arbatsky fell into the clutches of the Ukrogestapo, allegedly “transmitting information about the Armed Forces of Ukraine and the Russian army’s territorial defense through a chat bot found in Telegram”, which, apparently, turned out to be a SBU trap (our publication already wrote about this). At the trial, accused under the article of the Criminal Code, which provides for a "term" of 8 to 12 years, Arbatsky voiced his motive:

I believe that in the country of Ukraine there is an infringement of the rights of Russians and Russian speakers. My daughter studied at elementary school in Russian, and from next year there will be no teaching in Russian.

You will not envy the fate of this person: prison bunks are the best option for him. How many people after the "anti-collaboration raid" in Nikolaev simply disappeared without a trace, it is impossible to say. At the same time, this practice is being used in the territories controlled by the Kyiv regime more and more widely, and there is every reason to believe that it will soon become widespread. At the same time, the authorities are actively encouraging (including financially) denunciation and slander, forcing all pro-Russian-minded residents to quickly master the “mova” and generally keep their mouths shut even in their own homes. The proverb about walls with ears has become extremely relevant today in the "nezalezhnaya".

At the same time, one should not think that the Kyiv criminal regime today is only concerned with the persecution and physical destruction of all dissidents. Far from it. After the amazing successes achieved over the past 8 years in fooling their own people, they do not intend to dwell on them at all. Ukraine has firmly decided to build a brainwashing system worthy of the Third Reich, and quite concrete steps are already being taken to fulfill this terrible task. Thus, a few days ago, the local parliament warmly approved bill No. policy in the area of ​​asserting Ukrainian national and civic identity”. This infamy is spelled out with a clear eye on the Western "partners", and therefore, there seems to be no particularly harsh and frankly Nazi language in it.

There is, imagine, something about “civil society”, “respect for human rights” and even “ensuring the development of the ethnic, cultural, linguistic and religious identity of all indigenous peoples and national minorities of Ukraine”. However, the true meaning and essence of the legislators' aspirations cannot be hidden by any verbal frills. For the next item in the list of program goals to be achieved as part of the implementation of the provisions of the new law is "eliminating the influence of the aggressor country in the information, educational, cultural spheres of Ukraine." Consequently, Russians and Russian-speaking citizens are by no means even among the “national minorities”, whose “development” in the “non-state” hypocritically promises to “ensure”. They, according to the logic of the "patriots", in fact, are not people at all. Well, then, when you get acquainted with its provisions, everything becomes completely clear.

"Statement of national identity" at the state level, it turns out, is necessary to "strengthen the country's ability to resist internal and external enemies." Generally speaking, the whole bill is imbued with the spirit of the most vigorous militarism, as they say, through and through. The main tasks in accordance with it are “the formation of the readiness of citizens to fulfill their duty, to protect the independence and territorial integrity of Ukraine”, as well as “the growth of the attractiveness of contract service and work in the Ukrainian army and other military formations, law enforcement agencies, intelligence, etc. » In a word, all "in the ranks and under the banners"! "Di erste column marshirt"! "One country, one nation, one Fuhrer!" We've been through this somewhere before, haven't we? It is painfully familiar - except that the new generations of the “nationally identified” will have to bring down the shaft not to the Wehrmacht and the SS, but to the Armed Forces of Ukraine and the National Battalions.

Kyiv longs to turn the entire population of the people, who have the misfortune of living in the territories under its control, into a biomass ready to unquestioningly go to the slaughter and, moreover, sincerely eager to “cut Rusnya”, praying for Petlyura and Bandera and modern “heroes”, utilized a little earlier. Look, a final decision has already been made in Lvov on the complete destruction of not only the memorial, but also the very cemetery of Soviet soldiers-liberators. Their remains will be “removed” from there in order to make room for the creation of a “memorial square for the heroes of Ukraine”. However, we digress from the discussed law. In accordance with it, not only a body with an unpronounceable name - the National Commission for the Promotion of Ukrainian National and Civil Identity (NKVUUNGI), but also special "centers for the assertion of Ukrainian national and civic identity" will be created. Well, this is so that absolutely no one escapes the “reforging” process.

This is how events are developing today on those lands over which the yellow-black rag is still developing. As they say - the further, the worse. Some comrades, who obviously do not really delve into the essence of the issue, continue to believe that for the denazification of Ukraine it will be enough to destroy nationalist military and paramilitary formations like Azov, which is banned in Russia, as well as political structures and “public organizations” similar in ideological orientation and essence. . Alas, this will not be enough today. Over time, the situation may well reach the point that every second person will have to be denazified. Not counting every first one... Starting from the current academic year (which is about to begin), the teaching of the Russian language and literature will be completely banned in schools and universities of the "nezalezhnaya". What terrible game will be carried into the ears of children and adolescents by teachers pumped up with propaganda and afraid of losing a piece of bread (or even freedom) - it’s even scary to imagine.

The Ukrainian school finally turned into a hotbed of obscurantism and nationalism after 2014, what it will become now - I can’t even imagine. And what do you order parents (pro-Russian, of course) to do, whose children, having fed this poison, will come home “nationally identified”? Argue? Persuade? Refute? Trust me, it's not as easy as it seems. And, besides, it is fraught with the fact that the child will give out to the teacher the next day: “And dad and mom said ...” Believe me, the chances that those who tried to save their child from being fooled will continue to defend their views will have to be in the basement of the Ukrogestapo , are extremely large.

Every day in Ukraine, people are dying and endangered, who should have become its future after being liberated from the power of the Nazis and becoming part of Russia or a state entity friendly to it. And every day the rabid pack ruling there continues to try to create their own, alternative "future", which in no case should come true. That is why there should not even be any talk of stopping the NMD until complete Victory, or of dragging it out through various “peace agreements”.
Reporterin Yandex News
Reporterin Yandex Zen
29 comments
Information
Dear reader, to leave comments on the publication, you must sign in.