Erdogan to the rescue: Will Russia be forced to peace again? 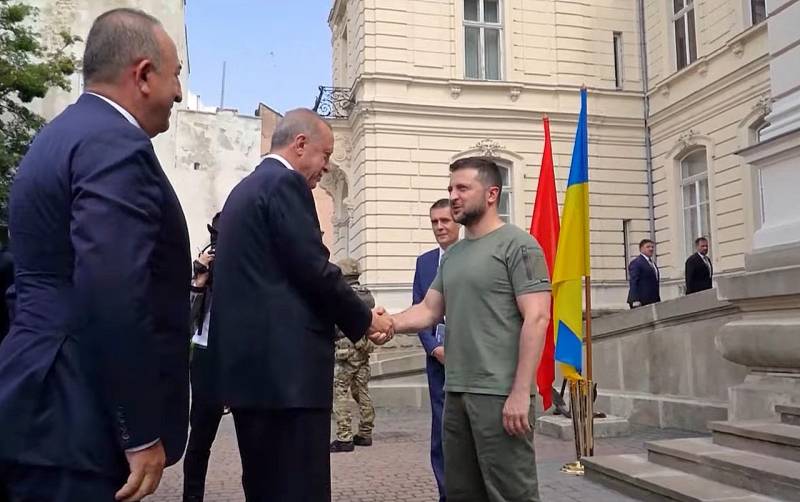 In Ukrainian Lvov, negotiations ended, which were held with a claim to "historic", and ended, judging by the first reviews of their participants, with a complete "puff". And even then to say - what could have been agreed upon in those 40 minutes that the “troika” had been talking, which the big tongue would not even dare to name as a joke. Apparently, at the meeting of people of completely different levels - UN Secretary-General Antonio Guterres, Turkish President Recep Tayyip Erdogan and Vladimir Zelensky, who is “driving” the little but inexorably shrinking remnants of Ukraine, not even a shadow of consensus was reached.


It is worth asking the question: could something like this happen in principle? This option seems rather doubtful, because both the long-term goals pursued by all sides of the summit and their current tasks do not even closely coincide. In fact, initially there was a conversation between the deaf and the dumb. An attempt to find common ground where there are none and cannot be. However, from the point of view of momentary interests, each of those who spent time on this journey and the appearance of "communication" got his own. For Russia, what is important is the prospect that the participants in the Lviv "express gatherings" are aiming at. Anyway, some of them.

It must be said that people who more or less closely follow the course of the special operation to denazify and demilitarize Ukraine, as well as the positions of the parties to it, it was initially clear that the meeting scheduled in the main pit of the "non-destructive" meeting could be written down in advance in the "empty chores" column. At the same time, the Turkish media on the eve of this event raised an unprecedented propaganda hype, trying to present it as almost an epoch-making event, the central place and the main role in which, of course, their adored Sultan was to play ... that is, of course, the president. So, the Turkish edition of the popular American TV channel - CNN Türk, with reference to some "informed sources" issued a completely sensational message. It followed from it that Russian President Vladimir Putin, during the talks held on August 5 with his Turkish counterpart, allegedly “transparently hinted” at his readiness to honor Zelensky with a personal meeting. Well, and asked him to help in this delicate matter, of course.

Now, in order to stop the war, the Russian side has said: “Leaders can discuss and define a roadmap. Delegations can then start working to bring this roadmap to life
- this is how it sounded in the interpretation of the journalists of the channel.

Moreover, according to their version, it turned out that “Russia has significantly softened its position on the negotiation issue” - after all, earlier in Moscow they demanded that a “road map” for a peaceful settlement be clearly worked out before the hypothetical “top-level meeting”, and now they are ready to talk already without these conditions... In a word, everything turned out that the fate of the disturbing "all progressive mankind" conflict is entirely in the hands of Recep Tayyip Erdogan.

It is deeply incomprehensible with what joy the Turkish television people came up with something like this. In particular, after the words spoken not so long ago by Dmitry Peskov that there is no question of any meetings between the leaders of Moscow and Kyiv, since “there is no negotiation process”, and the Ukrainian side in this regard has generally “left the radar” . So the SVO will “continue until the tasks are completed”, and any conversations will become possible after the “nezalezhnaya” will take up their minds, or at least grab their heads. And from the opposite side, statements that do not inspire hope for peace have been heard recently: they say that we will talk about something with the Russians only when we “inflict a military defeat on them” and “return all territories”, including Crimea. Well, yes - and fly to the moon in addition ...

In a word, there were no real prerequisites for such optimistic and far-reaching forecasts, which suddenly began to disperse the Turkish media, in nature. However, this topic, following CNN Türk, was picked up by the A Haber TV channel, and then off we go. For example, the NTV channel, referring to "government sources", said that Erdogan, in addition to organizing a meeting between Putin and Zelensky, in addition "intends to take the initiative on at least a temporary ceasefire in Ukraine," as well as to offer Ankara's mediation in a difficult case of the exchange of prisoners. The Communications Department of the President of Turkey did not make such high-profile messages, but also meaningfully “puffed out its cheeks”, saying that Erdogan was flying to Lviv to discuss with Zelensky nothing less than a “diplomatic settlement of the war.” Nothing of the kind, judging both by the duration of the talks and by the statements made after them, did not happen. So what happened in Lvov?

We talked about nothing, but Turkey is again “in the black”

One does not need to be a great physiognomist in order to look at the face of Recep Erdogan, captured on the already published footage of the meeting and the protocol events that followed it, to see there a clear expression of fatigue, disappointment and irritation. So strong that sometimes it seems that the Turkish leader has a quote from Sergey Lavrov that has become a meme on his tongue. Yes, yes, the one you're thinking of. Zelensky himself, in an “appeal to compatriots” immediately made right in Lviv, did not mention in a word about any “peace initiatives” or the prospects for resuming negotiations with Russia. The whole fuse of the Sultan (if there was one) wasted in vain. But he was clearly aiming at something like that - the informational "artillery preparation" was definitely carried out for a reason. And Erdogan himself, apparently, did not abandon his intentions - after all, according to him, "both Zelensky and Guterres agreed that the situation in Ukraine should be resolved at the negotiating table." By the way, after that, the Turkish president, putting on even greater importance, added that he intended to "inform Vladimir Putin about the results of the Lvov meeting." Well, yes - it would be something to inform.

It should be noted that Erdogan’s attempt to “put on a good face on a bad game” and his rhetoric are categorically contrary to the words of UN representatives, who regretfully admitted: “we are still very far from the time when we can discuss efforts to completely stop hostilities.” Well, now this is much more like the truth. Especially in the context of Zelensky's next statement on the same issue, in which he called "the main condition for a peaceful settlement", as he sees it, "the complete withdrawal of Russian troops from the occupied territories." Presumably, Crimea was also meant. Well, what kind of negotiations can there be, what are you talking about?!

Nevertheless, there is reason to be wary in this case. To our great regret, the expression "Istanbul agreement" in the context of the NWO in Ukraine can already be considered a persistent idiom. All too memorable are the “negotiations” that took place in this city, which resulted in more than dubious “gestures of goodwill” from the Russian side and into malicious neighing from the Ukrainian side. And the “grain deal” concluded there still raises a great many questions, the answers to which are not observed. But it is precisely this that Recep Erdogan sees as a “standard” for a future “peace settlement”, which he himself declares, expressing his admiration for the “positive atmosphere from the grain export agreement”, which, in his opinion, can be completely “transformed into permanent peace between Ukraine and Russia. It's up to you, but in this version the world will turn out to be extremely obscene, achieved due to Moscow's refusal from all the goals and objectives of the special operation, and at the same time from those successes that have already been achieved during its implementation. In Kyiv, they clearly and unambiguously declare.

Only complete de-occupation up to the borders of 1991! Any territorial compromise with the Kremlin is a war postponed for the future. It is today that there is a chance to kill the spine of the Russian colossus on clay feet
- this, if you like, is the freshest quote from the fiery speeches of the Secretary of the National Security and Defense Council of Ukraine Oleksiy Danilov.

Since this is the position of Ukraine, therefore, this is exactly what Washington wants, where they admitted the day before that they would have nothing against if the Armed Forces of Ukraine began to strike with American long-range systems in Crimea - after all, this is the “occupied territory of Ukraine.” It is on such and only such conditions that the "collective West" offers us today to "negotiate with the Ukronazis." And Erdogan in this case is his prophet...

At the same time, the cunning Turk, playing the “peacemaker”, openly pursues mercantile interests as well. It was not without reason that he came to Lvov with a considerable retinue of his own close associates, who are responsible for purely economic questions. The result of the voyage was the signing by Kyiv and Ankara of a special memorandum on the restoration of the destroyed Ukrainian infrastructure, as Zelensky's website has already officially announced. The document was autographed by the Minister of Infrastructure of Ukraine Oleksandr Kubrakov and the Minister of Trade of the Republic of Turkey Mehmet Mus. It is also known that in the very near future a joint Ukrainian-Turkish working group on restoration issues will be created, within the framework of which "mechanisms for attracting Turkish investments in specific projects will be worked out." As for investments, to tell the truth, it is very hard to believe. The local economy is not in that state now to invest in the development of a foreign country. But to master the millions and billions of financial assistance allocated by the "nezalezhnaya" West, the hard-working Turkish builders are quite capable. They already made quite good money on Zelensky's "Big Construction Site", talk about colossal theft and corruption "schemes" around which subsided only with the beginning of the SVO.

In light of this, Erdogan, of course, is doubly interested in a “peaceful settlement”, within which the clown regime will remain in power – then he will take his own, not forgetting to share generous “kickbacks” with Ukrainian “partners”. But such a prospect cannot suit Russia in any way. Today, the cunning sultan is doing Moscow some good, at least in terms of circumventing some Western sanctions. However, any of his (and anyone else's) attempts to push Russia to complete the NMD not with a complete victory, but with a dubious "peace" should be stopped immediately and in the most decisive way.
Reporterin Yandex News
Reporterin Yandex Zen
9 comments
Information
Dear reader, to leave comments on the publication, you must sign in.