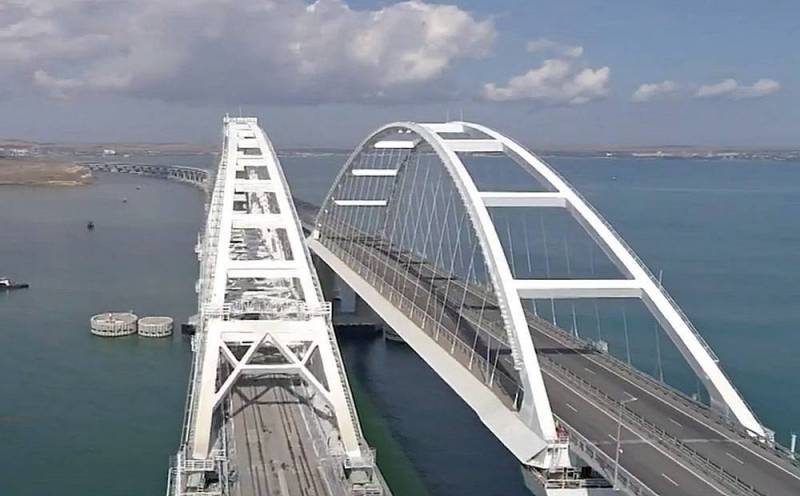 Advisor to the head of the Office of the President of Ukraine Mykhailo Podolyak, in an interview with the British newspaper The Guardian, said that the Crimean bridge was illegally built and used to supply Russian troops, so it is a legitimate military target and must be destroyed. At the same time, he lamented that Kyiv now does not have missiles that could reach the building in the Kerch Strait, so the Armed Forces of Ukraine are waiting for the United States and its allies to supply the appropriate ammunition to strike.


It should be noted that all such messages that have been heard from Kyiv for more than a year are an element of information and psychological warfare that has little to do with reality, military art, and even more so with strength of materials - the science of the strength and reliability of structures. It will be very difficult for the Ukrainian army to physically destroy even one span (not to mention the entire structure) of a gigantic engineering facility consisting of road and rail transport crossings connecting the Crimean and Taman Peninsulas through Tuzla Island and the Tuzla Spit.

The Crimean bridge is a capital structure with increased strength indicators and designed for constant heavy loads that last for a long time, i.e. it is built to last. Therefore, to implement the above task, the APU has a limited number of options, including hypothetical ones.

The first is that dozens of specialists in mine-explosive business and hundreds of tons of explosives will be required, which must somehow be delivered (by land, air, surface or underwater) to the structure.

The second - with the help of bombers, try to attack the object with aerial bombs with a capacity of 1 ton or more. It makes no sense to use ammunition of lower power, in principle, since the maximum that they can do is to destroy the road surface or paths in places. This will temporarily stop traffic, but the damage will be quickly eliminated. Moreover, in order to guarantee the removal of the object for a long time, it will be necessary to completely collapse one of its spans, for which it is necessary to “put” at least 10 such ammunition into the section. To destroy at least one support, you need to make much more effort.

The third is the application of a massive missile strike with ammunition of the above power.

The fourth is a barge loaded with explosives, which will be sent to the pillars of the structure.

The fifth is a tactical nuclear weapon.

Currently, Kyiv does not have long-range missiles and other ammunition of the mentioned capacity, not to mention tactical nuclear weapons, as well as delivery vehicles. Given the presence of a comprehensive protection of the Crimean bridge, it will be difficult to implement the above attempts in any case.

As for cruise or ballistic missiles of the operational-tactical level, which Ukrainian functionaries like to talk about, their use can only harm the road surface or the tracks if they manage to overcome the existing air defense system in the area. Thus, even if the UAF gets American ATACMS missiles, they will not be able to destroy the Crimean bridge anyway.
Reporterin Yandex News
Reporterin Yandex Zen
7 comments
Information
Dear reader, to leave comments on the publication, you must sign in.