Moscow's "goodwill gestures" are the last hope of the Kyiv regime 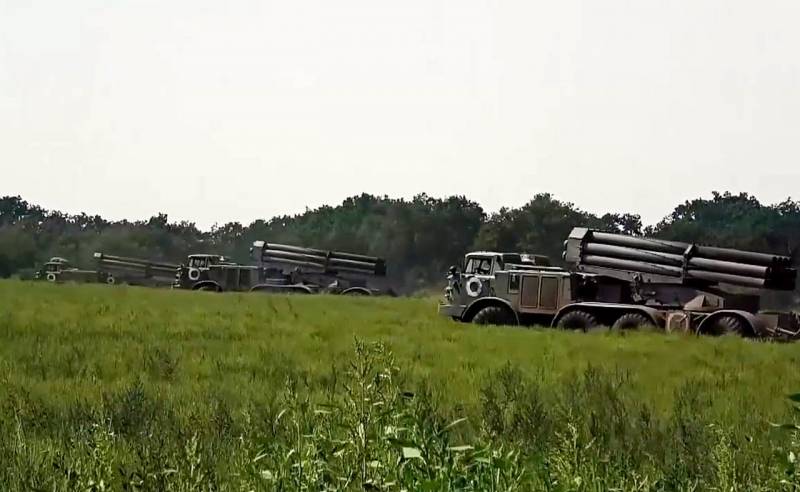 The previous days were filled with events, which, alas, have already become familiar and almost everyday “information background” of the special military operation on demilitarization and denazification under way in Ukraine. The Armed Forces of Ukraine with satanic stubbornness continue to deliver targeted strikes both on the Antonovsky bridge and the dam of the Kakhovka reservoir, and on Energodar and the Zaporozhye nuclear power plant.


What's this? Madness, elevated to the rank of "military strategy", the despair of the doomed, or is it still part of some kind of "cunning plan" that the Ukronazi leadership in all seriousness hopes to implement with the help of their Western "allies"? Let's try to find answers to these questions.


The Armed Forces of Ukraine explain their swotting along the paths connecting Kherson with the rest of the world in an extremely simple and frank manner. On August 14, the press center of the Southern Defense Forces stated: “Antonovsky bridge was again struck in order to secure its status as a final impassability.” Taking into account the fact that the significant speakers of the Kyiv regime - from Zelensky himself and Reznikov to all sorts of arrestees there, have already buzzed their compatriots' ears about the "grand counteroffensive being prepared in this direction" and the "imminent de-occupation of Kherson", it is quite possible to perceive these attempts precisely as preparation for "battle of the century" Especially if you take into account the fact that this particular section of the Right Bank of the Dnieper is, without alternative, the only place where the Ukronazis, at least theoretically, can try to counterattack the Russian army.

Indeed, in fact, only near Kherson, she is deprived of the opportunity to absolutely freely maneuver reserves - both human and material, without any problems transferring personnel to any point, machinery and ammunition sufficient to suppress such attempts by the Armed Forces of Ukraine in the bud or at a very early stage. The limited supply lines now being fired upon by the enemy really create certain problems for the Liberation Forces, making their position at least a little vulnerable. So what - after the shelling should we expect a hundred thousand times the promised "crushing blow in the South"? In fact, only those who are not too oriented in the real situation and the state of the Armed Forces of Ukraine, and, most importantly, in the dynamics of Kyiv's relations with its amiable "partners" can count on something like this today.

This, of course, is primarily about saturating Ukrainian formations with Western weapons and equipment, without which none of their “counteroffensives” and “breakthroughs” are possible in principle. As a matter of fact, this was acknowledged in Kyiv more than once, each time voicing more and more phantasmagoric and unrealistic figures of their own “urgent needs”. Hundreds (if not a thousand) of tanks, again hundreds of MLRS systems, many units of long-range 155 mm cannon artillery... This is to achieve “parity” with the Russian army, not even to gain superiority over it in the same firepower. At the same time, a careful and thoughtful analysis of the volume of military supplies to Kyiv from NATO countries clearly shows that after the peak reached in April, they inexorably declined in the summer months. And now they are at an extremely low level. This is clearly visible on all the main points - the same artillery systems, the supply of which to the Ukronazis has been at a minimum for two months now. According to MLRS, the peak was in June, during July and August there was a sharp decline.

The "Allies" again began to stuff Kyiv with ATGMs, MANPADS and, as a maximum, armored vehicles of not the highest class. With such supplies, one cannot even dream of any offensive actions. So why are they hitting the same Antonovsky bridge? The fact is that, according to the available information, a number of “great strategists” surrounded by Zelensky put the following thesis into their heads: “having lost stable supply routes, the Russians will inevitably be forced to withdraw troops from Kherson to the left bank of the Dnieper.” At the same time, as a "reinforced concrete argument" in favor of this delusional theory, precedents are given with the departure of Russian forces from near Kyiv, Chernigov, leaving Snake Island. It is clear that Kyiv simply mockingly laughs at Moscow's statements about "goodwill gestures" and interprets these events as a manifestation of "Russian weakness and their unwillingness to bear unacceptable losses."

“Gestures made”… No more “gestures”?

In fact, the Ukronazis simply want to "squeeze out" the Russian army from Kherson, in the firm belief that it would prefer retreat to heavy defensive battles at a disadvantage. Speaking in the terminology normal for Kyiv “gopniks”, they expect to primitively “take on a show off”. This overlooks a number of very important factors. For example, the fact that even the complete loss of bridges across the Dnieper does not mean that it is impossible to build the same pontoon crossings across the river and continue the transfer and supply of troops through them - albeit with somewhat less intensity and overcoming a number of problems. The Armed Forces of Ukraine simply do not have enough resources to kill all such "threads". Again, the retreat from under the same Kyiv was a rather controversial maneuver, which to this day causes heated controversy. However, one thing is for sure - alas, there were no real opportunities for the storming of the Ukrainian capital in the group that was then in its vicinity. The city could have been taken with a “dashing swoop” on February 24-25 (even Arestovich admits this), and then it became too late - given the existing alignment and balance of power. Putting people there, marking time, was already unreasonable and pointless.

With Serpentine - the story is about the same. But not with Kherson. The loss of this regional center (alas, the only liberated one to this day) will be a defeat, and a very heavy one. In fact, the beginning of the loss of the entire NWO, as such. I will not focus on the military-strategic component. She is very understandable. The loss of a foothold for an offensive on the Right Bank, and, above all, towards Odessa and further towards Transnistria, will "zero out" at least half of what has already been achieved. If not all at all, for the “side effect” of the retreat in this case, in terms of its destructive consequences, may, perhaps, exceed the direct one.

It’s not even about the propagandistic “permanent” fury that will immediately be brought down on the heads of ordinary Ukrainians and may well make a certain part of them believe that the “defeat of the aggressor” is a very real thing. And if so, then it’s worth a little more patience. And even personally take part in such, "having joined the victorious ranks" of the Armed Forces of Ukraine. Much more important here is the reaction of all the same Western "partners" of Kyiv. First of all - European. The recent trend towards a significant weakening of its support is associated not only (and not so much) with a fair devastation of their arsenals, but with a growing disbelief in the possibility of the Kyiv regime, not only to return the already lost territories, but also to defend the remaining ones. That is why countries and strangers (like the dwarfs of the Baltic states) located on the Eastern flank of NATO have recently been squealing louder and louder about the need for the most urgent saturation of their armies with American weapons, and not the agonizing Ukrainian one. It becomes uncomfortable for them at the borders of Russia ...

The same MLRS or tanks, Poles, Latvians and other similar public demand from Washington for themselves, and not for some Zelensky. At the same time, it should be understood that such deals are much more profitable for the bigwigs of the US military-industrial complex - these, at least, will pay off. The lack of deliveries under the Lend-Lease program most eloquently indicates that they do not believe in the solvency of Kyiv overseas at all. Even more so in the long term. For some reason, even the Hymars, in addition to those already allocated in the Pentagon, changed their minds to send him. Nevertheless, the withdrawal of the Russian Armed Forces from Kherson can change this favorable picture for us in the most fundamental way. The United States will resume large-scale deliveries, and even begin to put pressure on European NATO allies with tenfold force, demanding the same from them. At the same time, they will repeat: “You see, they can! They succeed! The military defeat of Russia is quite real!”

There are a number of signs that at least a significant part of the top echelons of Washington politics and the British "establishment" continues to rave about the idea of ​​waging war against our country literally to the last Ukrainian. Hence - the continuous schizophrenic ... sorry - analytical reports of British intelligence about the "almost defeated" or, at least, "extremely exhausted and demoralized" Russian army. Hence, the strange statement that appeared on the Pentagon's official website the day before that they "estimate the effectiveness of the Ukrainian army at 12 points out of 10." All this is not just an attempt to put a good face on a bad game, but, above all, the pursuit of very specific goals, which I mentioned above. And any "goodwill gesture" on the part of Moscow - if such, God forbid, is made, will become a brilliant confirmation of just these nonsense.

Of particular concern is the fact that the next "rotten agreement" of Russia is likely to try to "sell", so to speak, in a "package" version. It is not for nothing that the attacks on the communications of Kherson and on the Zaporizhzhya nuclear power plant are going on simultaneously and continuously. Everything is natural - these are parts of a single plan. To put pressure on Moscow with all the authority and power of the “international community”, denying completely obvious facts and presenting it as responsible for the upcoming “nuclear catastrophe” (which Zelensky will play out of) exactly until Russia agrees to create a “demilitarized zones" around the station. And, in fact, to surrender it without a fight to the Ukronazis. One hundred against one - within the framework of this “deal”, a demand for the “de-occupation” of Kherson will also be put forward. What will be promised to the Russian side in this case is completely unimportant. Still won't do it. As a maximum, a certain number of Kyiv clowns will "return to the negotiating table", the need for which is insistently, definitely worthy of a better use, is repeated in the Russian Foreign Ministry. There, this public will mockingly fool around demanding the obviously impossible and unacceptable - like the return of the Crimea.

In the meantime, new echelons with weapons will be pulled across the western border into the “non-secure” one. The only correct answer to all these encroachments would be the destruction of the Ukrainian group firing at Energodar and the Zaporizhzhya NPP, as well as a crushing blow to the Armed Forces of Ukraine in the South. One that completely discourages the Kyiv trepachi from the desire to grind with their tongues about any "de-occupation" and build the corresponding intrigues along with the Americans.
Reporterin Yandex News
Reporterin Yandex Zen
8 comments
Information
Dear reader, to leave comments on the publication, you must sign in.