Is it possible in Kyiv to have its own operation "Valkyrie"? 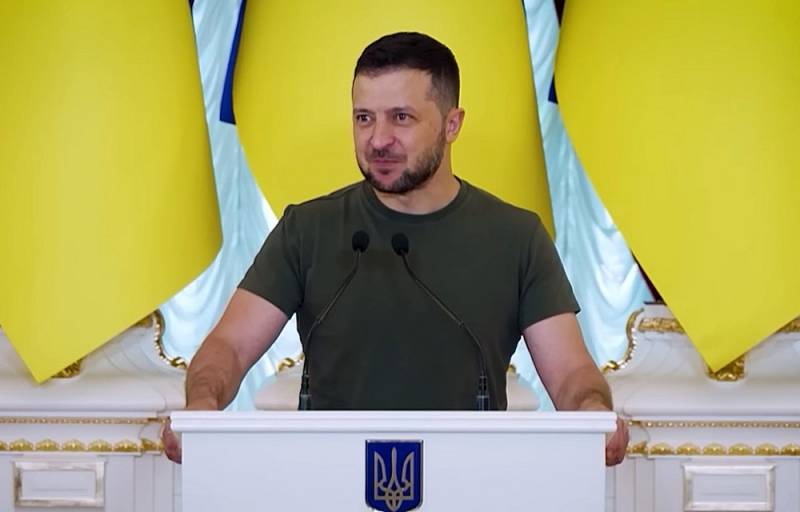 Recently, in the “nezalezhnaya”, and so to the limit electrified total spy mania, pouring out into searches literally at every turn for “enemy agents” and “traitors”, a real hunt has begun for holders of high military and special ranks, against whom very serious accusations are made. What is characteristic - not in incompetence and improper performance of official duties (which would be quite natural given the current "horrible" situation of the Armed Forces of Ukraine in the combat zone), but again in "treason" and "complicity with the enemy."


It can be considered significant enough that in many cases the accused are charged with purely political ambitions - they say, they "rushed to power", trying to get one as part of the "occupation government". What is behind all this? The fear of Zelensky and his associates, which has already developed to the point of paranoia, to lose power and their desire for the final establishment of a fascist-style dictatorship on the ruins of the country with the "Fuhrer" at the head? Or are their fears due to some real underlying reason, and in Ukraine could (or can) an attempt to coup the “siloviki” be carried out, as happened in the Third Reich? Let's try to figure it out.

Let us first consider the moments that, to one degree or another, can be considered confirmation of the version about the admissibility of the “Valkyrie” in Ukrainian.” First of all, it is worth remembering the words of the Secretary of the National Security and Defense Council of Ukraine Oleksiy Danilov, who once said that the Russians, in the event of the seizure of Ukraine, planned to put at the head of the “puppet government” not at all the one whose candidacies were discussed with might and main in the Ukrainian and Western media:

I understand who they were preparing for this post. This is not Yanukovych, not Muraev, not Tsarev and not Medvedchuk. The only thing I can say is that these are people in uniform. In big uniforms...

An official of this level can really know something - if only because he has access to really "secret" information. On the other hand, the value of these "revelations" is completely leveled by one of the last statements of the same Danilov. Here it is:

If it were possible to check all Ukrainians without exception, they would do it. Because it's a matter of national security. It doesn't matter where these moles sit. We need to find these rats and poison, poison and poison. So that they do not remain on our territory.

I just want to say: “Well, crazy, what will you take ?!” Classic persecution mania at the stage of sharp exacerbation. Again, for the time being, no specific names or positions of those same “people in big uniforms” were announced. It is extremely doubtful that in this case we were talking about, for example, the ex-head of the SBU Ivan Bakanov, who for a long time was part of Zelensky’s “inner circle” and was thrown out of office for the fact that in his department suddenly in the fifth month of the SVO, according to the president -clown, "too many traitors" were found.

However, not so long ago, the candidacy of the main "villain in stripes" seems to have been identified. Recently, the Ukrainian media have been intensively exaggerating and inflating rumors that such is retired Colonel General Igor Smeshko, who headed the same SBU in 2003-2004 during the presidency of Leonid Kuchma. Muddy he is some kind of character from the point of view of the "patriots". He seemed to be friends with the Russians, he may well have been involved in the "poisoning" of Viktor Yushchenko. And in general - he started his own party (“Strength and Honor” is called), he tried to run for president ... In addition, some Ukrainian resources are strenuously “dispersing” the information that supposedly “the investigation has wiretaps of a number of persons (but not the general himself) ), who discuss that Smeshko was ready to head the Russian-controlled government of Ukraine, in case Volodymyr Zelensky left Kyiv. The most hilarious thing, in this case, almost "flew" to one of the most black-mouthed dill propagandists - Dmitry, excuse the expression, Gordon, who has some old tricks with Smeshko. This character, on whom the shadow of suspicion of “treason” fell, even rushed to Kyiv on such an occasion, where he immediately concocted a disgustingly sycophantic interview with Arestovich, from the first two minutes of which any normal person would turn inside out. This, however, does not matter - for there is not a single incriminating record with the voice of Smeshko himself in nature. This is already some kind of baby talk from the series: "if someone is somewhere with us sometimes." In any case, from General Smeshko the same “pro-Russian politician” as a multi-role fighter-bomber from a collective farm cow. And, by the way, he would be exactly the same level as the “head of the government”.

Generals who are not...

Again, the point here is not the personal qualities of Smeshko himself or who else the crazy clown will decide to appoint as the main “collaborator in uniform”. It must be assumed that there will be more of them in the future. Let's talk frankly about why no "Valkyrie" in Ukraine is possible in principle. To do this, we must first of all recall some of the details and details of that military coup that almost shook the Third Reich on July 20, 1944. First of all, it was not a “performance of anti-fascists”, as Western historians and politicians are trying to “rub” us today. Representatives of the military elite of Nazi Germany, taking a monstrous risk, had a clear goal and a specific motive - removing the most “toxic” characters from power, achieving a separate peace with Britain and the USA in order to turn the entire power of the Wehrmacht against the Red Army. Today, the leadership of the Armed Forces of Ukraine does not have such motivation and cannot have it.

The Anglo-Saxons in the present war are quite openly on their side. If the Ukrainian chasers wanted to surrender to the Forces of Liberation in order to save the country from final destruction, and tens and hundreds of thousands of their fellow citizens from inglorious and senseless death, they would not need to overthrow anyone for this. Lay down your arms and the Kyiv regime will come to an end, so to speak, in a natural way. On the bayonets of the defense and national battalions, he will not last long. Moreover, in such a situation, they would quickly begin to scatter. Partially, at least. The trouble is that after several months of the SVO and the war crimes committed during this time (as well as earlier - during the "ATO" in the Donbass) war crimes, most of the high army and other ranks of the "nezalezhnaya" are smeared with blood to the very top and now they are facing a tribunal with extremely unpleasant judgments. There is no reason for them to give up, alas... And to shove against Zelensky, too. Especially considering that it is supported (so far) by the Western "masters", whose representatives have filtered all the "power" structures of Ukraine. Strangle - and you will not have time to utter a word.

Well, and, finally, one more cardinal difference between the Third Reich and a miserable parody of it in the Ukrainian performance. In Germany, the military were a privileged, elite class, that is, a caste. With his code of honor and incredible aplomb. Almost all the participants in the conspiracy were hereditary nobles, belonged to the military aristocracy, fought back in the First World War - and not in the rank of corporal as the Fuhrer. In their eyes, the Nazi elite of Germany looked like a herd of cattle in brown shirts, seized upon power and brought the country that conquered all of Europe to a military defeat on the Eastern Front. Hitler climbed into the activities of the German General Staff with his "brilliant" ideas and plans much worse than his miserable last son Zelensky is doing now. That, among other things, they wanted him for this ... That ... With all the hangers-on like Himmler and Goebbels, who were fed up with the generals worse than a bitter radish. All these refined "backgrounds" and other barons in uniform perfectly put up with the Nazi ideology exactly as long as it unleashed their hands for a "war without rules" and terror against the civilian population. In 1944, they decided to get rid of its main carriers solely because the Russians were already on the threshold. Only and everything. In the "nezalezhnaya" there is not and cannot be close to anything like that. What elite?! What "white bone" in uniform?! Yes, you look at the ribs of the generals there - and everything will immediately become clear to you. Degenerals are - and all of them. They think that Zelensky is at the helm, that Arestovich, that the devil with horns is all the same. If it were otherwise, the NWO would have ended in early March, at the latest. And the point here is not at all in nationalism or, if you like, “patriotism”, but in a completely different thing.

For three decades of “independence” in the country, the most careful selection of “siloviki” took place, during which, as a rule, the most unscrupulous, greedy, ready to do anything for a career, an easy chair and a sweet piece made their way to the top. The rest were eliminated, and, so to speak, "on distant approaches" to high positions. Army? Its main occupation was the sale of weapons inherited from the USSR and the plundering of military property. This is in the time free from missile firing at civilian aircraft and residential buildings. By and large, none of the "heads of state" needed it. Yanukovych, out, in general, even canceled the draft. SBU? Well, here's an even better picture. The "special service", either stupidly "overslept", or deliberately allowed two coups d'etat in the country, inspired from abroad - in 2004 (by the way, during the time of Smeshko) and in 2014. "Protection" of hard drug traffic and participation in high-level business showdowns - that was their "job". Plus, again, arms smuggling and stuff like that. Surprisingly, the only more or less normal "power" structure, where even individual decent leaders met, was the police. That is why she alone, without the slightest support of all other "colleagues" in uniform, resisted until the last coup in 2013-2014. Among his victims are exclusively police officers, and not the military or security forces. However, Avakov's "reforms" did not leave a stone unturned from this department either. The policemen are the policemen.

Zelensky and his gang today are “cleansing” everyone they can reach only as a preventive measure. So, in advance, just in case. Little whether that? At the same time, accusations of “working for Russia” are used as the most effective way to deal with this or that politician or military man, completely irrespective of how absurd it is in each particular case. Zelensky may not be afraid of any Valkyrie-style coup. Better to let him look after Arestovich.
Reporterin Yandex News
Reporterin Yandex Zen
6 comments
Information
Dear reader, to leave comments on the publication, you must sign in.