American super-rocket BFR: too good to be true 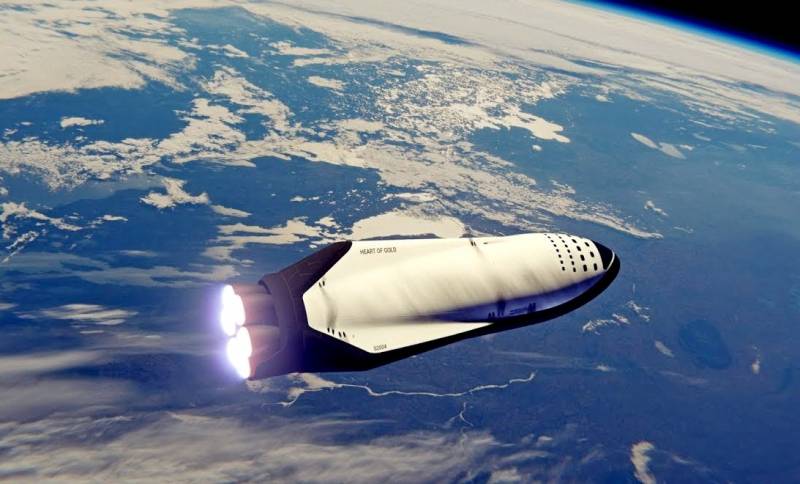 
SpaceX has long been unrepresentative. It was she who was the first in history to be able to create a partially reusable space launch vehicle. And not just create, but plant and restart. Behind the spectacular video of the return of the first stage of the Falcon 9 was the work of thousands of talented engineers. But ordinary pragmatism was also hiding: Musk built a relatively simple, relatively cheap and quite reliable rocket, which became the most popular launch vehicle on the market. Even without taking into account the reusable stage, she would probably be in the top, which was promoted as much as possible economical an approach.

In turn, first launched this year, the new Falcon Heavy is a super-heavy carrier. In fact, it represents several “nine” that are woven into a single whole. That is, Falcon Heavy can, with some reservations, be called another version of the previous SpaceX launch vehicle. The real revolution should be the new Big Falcon Rocket, which is also sometimes sometimes jokingly or seriously called Big Fucking Rocket. The latter reveals the essence well: before us is not just the most ambitious creation of SpaceX, but also the largest space-rocket system that has ever existed. It is significantly larger than the largest Saturn-5 rocket in the history of mankind, which the Americans used to launch the Apollo spacecraft to the moon. 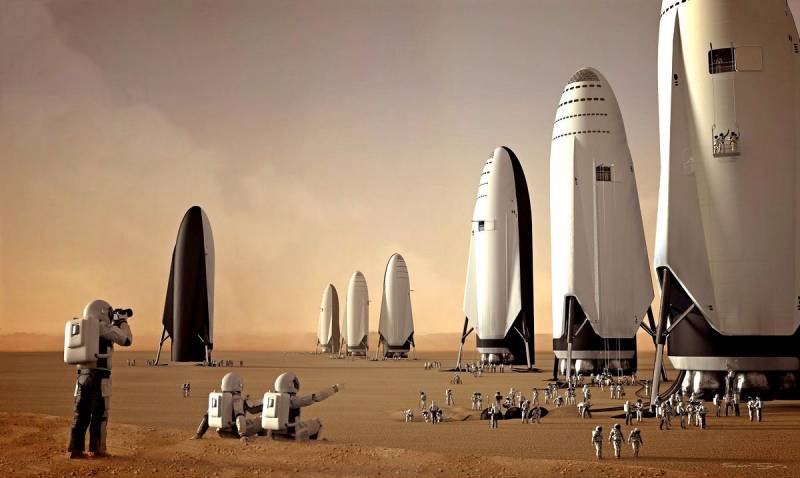 A person uninitiated in all the intricacies of the project of Ilon Mask could get a little confused, because his new system has already changed its name and appearance several times. For the first time, Musk presented the details of the Interplanetary Transport System project on September 27, 2016 at the 67th International Congress on Astronautics in Mexican Guadalajara. It was then a two-stage system with a length of 122 and a diameter of twelve meters. The first stage is a reusable launch vehicle, and the second is the spacecraft itself, which, according to the idea, can accommodate more than a hundred people. At the heart of all this is the new powerful Raptor methane engine: they plan to install it both on the first stage and on the ship.

Later, the Interplanetary Transport System transformed into the already mentioned Big Falcon Rocket. The main purely visual difference - the spacecraft and the rocket “lost weight” and began to look less impressive. The diameter was reduced to nine meters, so now the BFR is more like ordinary superheavy missiles. The goals of the system, in general, also changed somewhat. If at first the system was seen as a means for the colonization of Mars and even the resettlement of a million people to the Red Planet, then Elon Musk voiced the idea of ​​a “lean startup”. It involves combining in one rocket of technologies launch into low Earth orbit, other planets of the solar system, as well as the possibility of intercontinental flights within the Earth. Another goal is relatively modest. The fact is that earlier SpaceX intended to launch tourists to the moon with the help of Falcon Heavy and the manned spacecraft Dragon. Now this mission fell on the shoulders of the BFR. Recently, the company even found the first tourist for such a trip. From the side, a system with such a wide functionality looks too ambitious. Upon closer inspection, everything seems even more surprising. 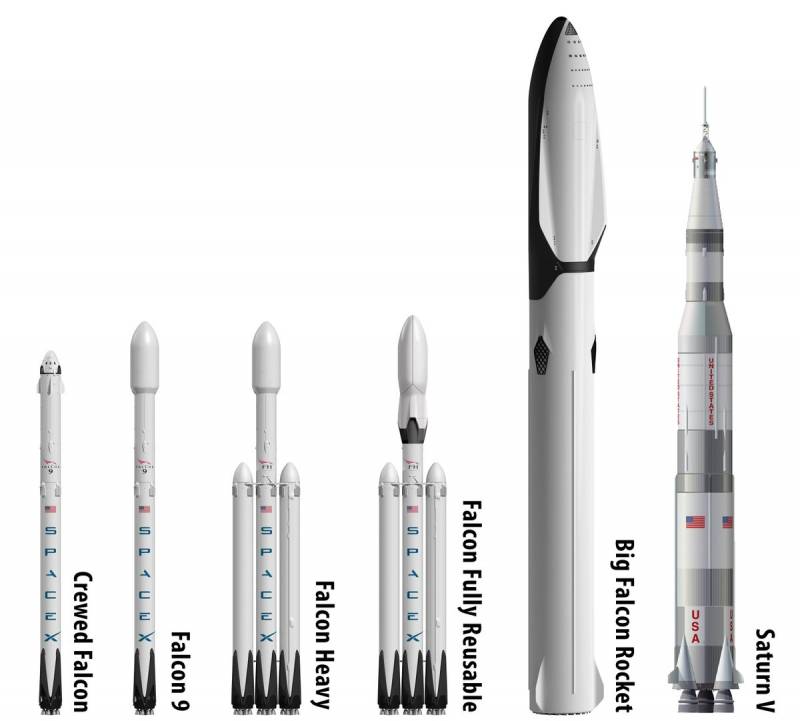 The project does not stand still. SpaceX previously tested the Raptor engine, showed the fuel tank of the ship, as well as a photograph of a giant rig for the manufacture of the body of a superheavy launch vehicle Big Falcon Rocket. Critics, however, are difficult to convince in the expediency of the undertaking. So, the scientific director of the Aerospace Rally System project and the developer of rocket plans Gennady Malyshev doubts that now there are "people who need to fly from New York to Shanghai in an hour." In his opinion, today it is possible to work without problems on the way, on trains and airplanes, without wasting time, so nobody (or almost nobody) will buy a ticket for the Ilona Mask rocket. Part of the Russian-language media, accustomed to calling Mask “Ostap Bender of the XNUMXst Century,” generally considers the venture an ordinary PR. Actually, they would not have to doubt their innocence if Musk did not prove (even partially) his words by deed. 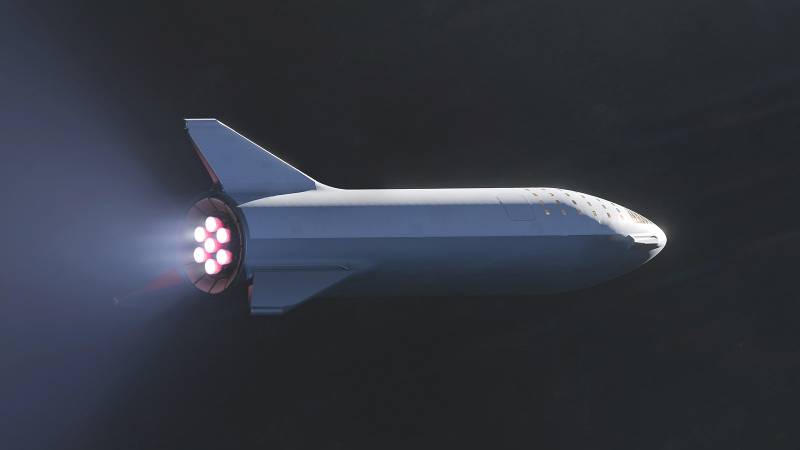 What are the real problems facing Big Falcon Rocket? In short, it is not entirely clear why it is needed at all. Purely conceptually, the BFR looks like a ghost from the Cold War. A kind of modern reincarnation of the Burana or Space Shuttle. Recall, then these ships were built, including for military purposes. And after the confrontation between the USSR and the States, they, being expensive and complex, were ultimately simply not in demand. SpaceX cannot understand this. After all, this company is the best in the world when it comes to the space industry, according to finance. Falcon 9 is now one of the most affordable heavy class missiles. The Dragon spacecraft created by the Mask engineers is also the embodiment of economy. Cheap, relatively simple, partially reusable and able to solve all the problems that now face the manned space program.

In contrast to these developments, Big Falcon Rocket looks like a complicated road and filled with unimaginable risks. After all, happen on board a serious accident in space, the entire numerous crew will be put on the brink of life and death. Unusually, Musk intends to “cannibalize” his old missiles in favor of the BFR. But Falcon 9 and Big Falcon Rocket are not just different launch vehicles, but carriers of completely different classes. There is almost no doubt that the new superheavy rocket will be more expensive than its predecessors, therefore, SpaceX risks losing its main advantage in the market.

It is worth saying that no one succeeded in making a cheap superheavy carrier: due to the huge number of components, assemblies and the need to service many engines at once. Musk himself in February 2018 announced that the cost of launching an expendable version of the Falcon Heavy is $ 150 million. At the same time, the launch price for the Falcon 9 is 62 million. Big Falcon Rocket is significantly larger and more than a third more powerful than Falcon Heavy. What kind of savings can be discussed is not clear. In this regard, the only real commercial advantage of BFR is the “rod” design, in which the number of missile components, as in the case of the Falcon 9, is minimized. But this alone does not make it economical. It is worth recalling that only on the first stage of the BFR will a 31 (!) Sustainer engine be installed: versus nine on the Falcon 9. Even if they successfully return to Earth, they will eat an incredible amount of fuel. 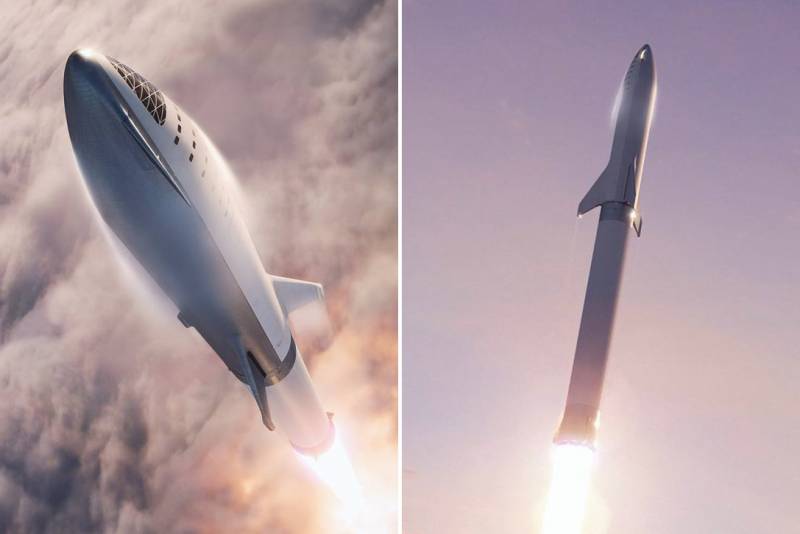 Of course, it can be assumed that a new rocket will be needed to put heavier commercial cargoes into orbit. But there is simply no such need. All commercial satellites successfully launch more light rockets - the same Falcon 9. Again, even Falcon Heavy has only four commercial orders, two of which are closely related to secret missions for the US Air Force, which, as you might guess, cannot be many and for which the military can even fork out for the promising Space Launch System rocket.

In general, it seems that Musk is coming up with not only new missiles, but also new rules of the game that do not yet exist on the market. Believe it or not - this is an individual matter for everyone.
Ctrl Enter
Noticed oshЫbku Highlight text and press. Ctrl + Enter
We are
The revival of Baikal: what is wrong with the Russian reusable missile?
New Glenn Rocket: A Media That Could Crush Ilona Mask
Reporterin Yandex News
Read Reporterin Google News
9 comments
Information
Dear reader, to leave comments on the publication, you must sign in.