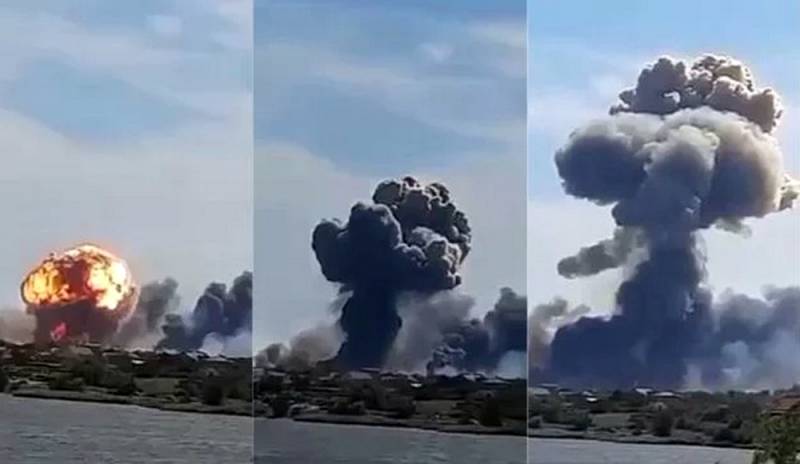 The incident at the military airfield in Crimea, which happened on August 9, in the context of the ongoing special military operation, could be called nothing more than unfortunate in terms of its consequences, if only ... If it were not for the death of one person and at least 14 affected. This is not to mention property damage. And if you do not take into account the extremely unpleasant fact that Ukraine and its Western allies in terms of propaganda managed to squeeze the maximum out of this case. While the Russian side found itself in a rather ambiguous situation.


The jubilation in the “nezalezhnaya”, which has the character of some kind of wild coven of deranged cannibals, has not subsided since the first information reports about the explosions. The number of "torn button accordions", sorry - the strings on kobza and banduras can no longer be counted. "Hurrah-patriotism" in its vile Ukrainian incarnation is gushing with waves and fountains. In turn, the West took advantage of the incident in order to once again promote the Armed Forces of Ukraine and make a number of statements that cannot but cause concern. Well, it looks like the time has come for us, albeit reluctantly, to try to find answers to a number of questions and think about the conclusions that should be drawn without fail in this situation.

"Is it possible? Of course it is possible, if it is not excluded ... "

The phrase I put in the subtitle is attributed to Comrade Stalin. Let's try to understand the causes of an emergency at a military airfield, starting from this principle. Strictly speaking, there are three versions of what happened so far. First, the attack on the object was inflicted by the Armed Forces of Ukraine with the help of some kind of "high-precision long-range weapon" - either received from the "allies", or even created independently. The second is that the explosions are the result of the actions of some Ukrainian DRG specially abandoned in Crimea or local “partisans” (the latter is the least believed). The third is the official position of the Russian Ministry of Defense: the cause of the emergency was ordinary gouging, violation of the rules equipment safety when handling explosive objects. Let's start, as usual, from the beginning. The theory about an “inevitable missile strike” was first voiced by the main “criminal” of the Kyiv regime, Aleksey Arestovich, while stating that “while the allies are delaying the supply of long-range missiles, the Ukrainian military-industrial complex does not stand still.” From Arestovich, of course, bribes are smooth, but the American Institute for the Study of War also tried to “promote” something similar, in covering the NVO in Ukraine, claiming to be almost the main expert center.

True, they immediately made a reservation there that there could be no talk of an ATACMS strike, since no one had supplied them to Kyiv. And they immediately put forward a hypothesis about the fact that in the "nezalezhnaya" they could "modernize the Neptune anti-ship missiles." After all, did the Russians manage to modify their similar ammunition? True, the "Institute" immediately admitted that "any evidence" in favor of this assumption is completely absent. And I want to hype on the "hot", but I'm afraid to blurt out some very obvious stupidity. Numerous eyewitness accounts work against the version of the “rocket strike”, unanimously stating that nothing like the “arrival” in Novofedorivka was observed. And, fortunately, there is simply nothing to bring the Armed Forces of Ukraine to the Crimea. In any case, for now... Everything is somewhat more complicated with the variant of the work of the DRG. About this, both Arestovich and his colleague Mikhail Podolyak blathered something, who began to rant about the fact that “the demilitarization of Crimea” was taking place and “everything was just beginning.” Literally, he said the following:

Could it be someone from the guerrilla movement that is gaining momentum? Of course, because the people who lived in the occupation understand that the time of the occupation is ending and you need to show your position. This is because the return of the Crimea must be.
Tellingly, the version of the sabotage was very willingly supported by such significant American "mouthpieces" as The New York Times and Washington Post. The first edition did not go into much detail - they say "explosions at the airfield are the work of the Armed Forces of Ukraine, period." But the second cited the words of a certain “representative of the American government”, who claims that the terrorist attack in Novofedorivka was carried out by no “partisans”, but specifically by the Ukrainian SOF. This “message”, by the way, was immediately picked up in the “nezalezhnaya” itself and began to recall how none other than the current head of the Main Intelligence Directorate of the Ministry of Defense Kirill Budanov went to Crimea with a sabotage raid back in 2016. A sickly attempt at PR for this figure - with obvious signs of debility, like all Ukrainian propaganda (because it contains a confession in a specific crime committed by a high-ranking official), but "ringing". Alas, the possibility that the state of emergency is indeed a sabotage cannot be ruled out in any case. First, there are indeed relevant precedents. Secondly, the numerous references of eyewitnesses to the fact that the explosions occurred simultaneously in several places are alarming, which is somehow not very similar to “violation of fire safety rules”. Thirdly, what happened painfully “happily coincided” with the “day of indigenous peoples” celebrated by Kyiv, the most important of which are the Crimean Tatars. Irina Vereshchuk, a quarrelsome aunt with an insane position of “Minister for the Reintegration of the Temporarily Occupied Territories of Ukraine”, who gloated over the explosions, was not slow to remind of this. Maybe? Alas, yes. For it is not excluded.

I deliberately leave out the third, official interpretation of events. Here, perhaps, one should wait at least for the preliminary conclusions of an authoritative commission, which was probably immediately created to investigate the incident and its causes. And even better - the final verdict of the relevant competent authorities. In any case, as mentioned above, there are questions to this version. One thing is clear - in the West they unanimously declare complete distrust of her. The same "Institute of War" claims that the Russian side in any case will categorically deny Ukraine's involvement in the explosions, "because such strikes would demonstrate the ineffectiveness of Russian air defense systems." And British Defense Secretary Ben Wallace deigned to scoff at this issue, saying that "this clearly does not happen from a thrown cigarette butt", specifying that London "definitely does not consider Russia's explanations plausible." However, he also denies the possibility that the strike was delivered by missiles “delivered from the West”. In any case, Wallace primarily used the topic of the Novofedorovka bombings as an excuse to claim that “the Russian military airbase in Crimea is a perfectly legitimate target for the Ukrainian military.” This is about the, let's say, different interpretation by Moscow and the West of the concept of delivering strikes on the territory of Russia ...

And now it's time to move on to the topic of the reaction of representatives of this very West to the event that serves as the topic of our conversation. I have already voiced the position of Britain, now it is the turn of the United States. So far, only the speaker of the White House, Karine Jean-Pierre, has clearly expressed herself there, but her statements are very eloquent. To a direct question from a journalist about whether the United States considers Crimea a legitimate target for the Armed Forces of Ukraine, to which the Pentagon provided weapons, this lady replied that “we support Ukraine’s efforts to protect its sovereignty and its territorial integrity, as we have said many times, which means we will continue support Ukraine in their fight for their freedom, in their fight for their sovereignty against the brutal attack from Russia.” It is up to you, but these ornate words can be deciphered in such a way that arms deliveries from overseas will not stop, no matter what the Ukronazis do and no matter what objects (including on Russian territory) become targets for their attacks. It is impossible to see any other meaning here, even with a strong desire. And this, of course, worries, because each such statement once again convinces the Kyiv regime of the complete connivance of the “allies” and pushes them to new crimes.

By the way, in Ukraine itself, the explosions in Novofedorivka, in addition to misanthropic enthusiasm, causing uncontrollable vomiting, also provoked a wave of extremely militant statements. An unhealthy revival has gripped everyone: various politicians - from long-term "released" to fully operational, "military experts", journalists and "media people". All of them today are screaming with one voice that in Crimea (in Russia in general) it is necessary to “beat, beat and beat”, sparing no one and nothing. The most obsessed in their appeals even reach ideas about the fact that it would be time to “hit” Belarus as well. All this infernal madness is fueled by propaganda stuffing of the most disgusting kind - like the reports of the General Staff of the Armed Forces of Ukraine that the enemy allegedly “lost at least 9 aircraft” on August 9th. "Reinforcing" this nonsense is a bad quality video lasting a few seconds, in which people with a very developed imagination can see the wreckage of some aircraft at some airfield. It is clear that this is presented as "the consequences of a strike on Novofedorovka." There are those who believe and expect new, even more impressive "paramogs" from "zahysnyk". It is not at all surprising that it was on this wave of general rage that Podolyak and Zelensky himself suddenly spoke sharply about the “de-occupation of Crimea” as the ultimate goal of military operations and a condition for peace negotiations.

Well, and, in fact, about the conclusions... Paradoxical as it sounds, but, by and large, it is not so important whether the cause of the emergency was a "bull" thrown in the wrong place or a Ukrainian saboteur who penetrated the most important military facility. Both that, and another is the most severe, absolutely inadmissible in present conditions (yes, actually - under any circumstances) "puncture". Those who are responsible for preventing this should shake off their slackness and finally understand that there is a war going on. Moreover, a war with an enemy who does not choose means at all and is ready for absolutely anything. Each such mistake will cost Russia more and more - in terms of both material and human losses, as well as image losses. Nothing like this should ever happen again under any circumstances. This, in fact, is the main conclusion from what happened. The rest will apply.
Reporterin Yandex News
Reporterin Yandex Zen
82 comments
Information
Dear reader, to leave comments on the publication, you must sign in.