The crisis around the Zaporozhye nuclear power plant: Ukraine is digging a hole for itself 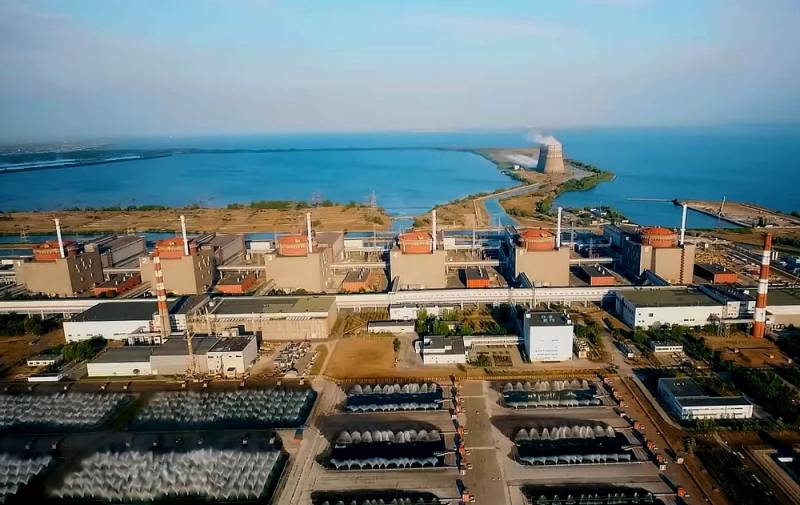 The situation around the Zaporozhye nuclear power plant, which is under the control of Russian troops, is escalating more and more. Shelling from the Ukrainian side has become more frequent, they are already following one after another. Moreover, the Ukronazis are not hitting the squares, but are clearly trying to cause as much damage as possible to the critical nodes and infrastructure of the station. These crazy actions, of course, are accompanied by a flurry of absurd and unsubstantiated accusations against Russia and demands for the "world community" to immediately "intervene in what is happening."


The calculation of Kyiv in this case is so simple and primitive that it does not even need to be deciphered. Everything is already on the surface – with its previous “gestures of good will”, Moscow, alas, created a most dangerous illusion for Zelensky and his gang. They are firmly convinced that by appealing to "authoritative international organizations" and primitive blackmailing them, one can easily achieve that the Russians will "give up slack" again. Specifically, they will agree to one or another unfavorable agreement for them, give back previously conquered territories, and so on. With all this, the madmen who started the most dangerous game with nuclear fire do not understand that in this case, most likely, they will outwit themselves and hasten their own collapse.

Cheap cunning, coupled with elementary stupidity and outrageous self-conceit, is a most dangerous combination. However, apparently, it was this vigorous "cocktail" that pushed the top of the ukroreich to those actions that the whole world is now watching with a shudder. Well, how! After all, the deafening cries about a "humanitarian catastrophe on a planetary scale" and a "global famine", which will certainly come, unless the "Western partners" put pressure on Moscow to unblock the Black Sea ports, have had an effect. And how! The “grain deal” concluded in Istanbul, the benefits of which for Russia are still extremely doubtful, but for Ukraine and its “allies” are absolutely obvious, is the best proof of this. And now Kyiv is trying to pull off exactly the same combination. Only instead of the “threat of death of millions of people in Africa and Asia”, who will definitely face kirdyk without Ukrainian barley and corn, a much more serious “horror story” is involved - the threat of a nuclear catastrophe that will “cover” vast territories. Many countries of the European Union - including. It is for the sake of this that the Armed Forces of Ukraine are hitting and hitting nuclear power plants, like clockwork, while trying to "hang" shelling on the Russian army. Only a clinical idiot can believe that she really strikes. All the hype is needed solely for the implementation of the “cunning” plan, which has already been voiced by the head of Energoatom, Petr Kotin:


We urge our partners to create a demilitarized zone at the station. There should be a mission of peacekeepers and experts from the IAEA and other organizations.

The same hurdy-gurdy - "demilitarization of nuclear power plants" and the introduction of a certain "peacekeeping contingent" there were brought by other representatives of the Kyiv regime. Like, “let the UN as soon as possible give a mandate to de-occupy the ZNPP and the thirty-kilometer zone around it and send peacekeeping troops there.” Otherwise, the Russians "will blow everything up there" and "arrange a second Chernobyl for Europe."

Nothing more delusional can be imagined. There are at least three completely "reinforced concrete" evidence, dispelling the shameless lies of the Ukronazis on this score to smithereens. Firstly, to hit a critical infrastructure facility, which is already in your hands, moreover, endangering both your own military personnel who protect it, and the station personnel, specialists, whose replacements you can’t immediately find. What could be more stupid? Secondly, as I wrote earlier, Russia has very specific views on the Zaporizhzhya NPP - so why spoil (or, moreover, destroy) the most valuable object of great importance and cost? Deprive Ukraine of electricity coming from there? So for this it is enough to shut down the reactors, and not blow them up to hell. Thirdly, there is no need to shift one's own suicidal tendencies onto opponents - in May, the State Inspectorate for Nuclear Regulation of Ukraine published a forecast of which regions could be affected in the event of a release of radioactive substances at the Zaporozhye nuclear power plant. According to this, in the event of an accident at the ZNPP, atmospheric masses will spread radioactive substances in the south and east of Ukraine in 71 hours. But of the neighboring countries, it is Russia that will suffer the most, where radiation in various concentrations will spread over a vast territory from Novorossiysk and Rostov to Lipetsk and Tambov.

The Russian side, by the way, also pointed out that in such a case, the entire Black Sea region would be under attack. The same Turkey, for example, just will not seem enough. Well, now the question is: why the hell would someone in Moscow need this?! A sane answer to it, as you understand, does not exist in principle. Well, and finally, the main thing is that the Russian side has repeatedly called experts from the IAEA and other relevant organizations to the station to carry out "activities in the framework of the implementation of safeguards, as well as monitoring the state of nuclear safety and protection." Kyiv is against their appearance at the ZNPP! They see this as "legitimization of the occupation." Need more proof?

Why there will be no "new Chernobyl"

It can be seen with the naked eye that the aggravation of the situation around the Zaporizhzhya NPP is beneficial exclusively to Kyiv. As mentioned above, in this way they want to solve several important issues at once. For example, without a single shot to “de-occupy” a rather large and, moreover, strategically important territory. Protect yourself from the fact that sooner or later the Zaporizhzhya NPP will be cut off from the Ukrainian energy system, which, in turn, will jeopardize Kyiv's plans to double the export of electricity to the EU. And with a guarantee of about 90%. Again, you can imagine what a huge propaganda hype will be raised around such a loud "peremogi"! Yes, the same Arestovich will wag his tongue for days, not even interrupting for a meal ... Well, the fact that “traces of the atrocities of the Russian invaders” and the mass graves of the station workers will certainly be found in Energodar in the very near future does not raise the slightest doubt at all. It is in this way - step by step, seeking from Moscow more and more concessions, "gestures of goodwill" and curtsies before, if it's three times amiss, "the world community, Kyiv expects to win. At a minimum, stretch out your own agony for as long as possible.

In addition, while the court and the case, Ukraine, arranging a hysteria around the crisis at the nuclear power plant that it itself created, is trying to discredit Russia as much as possible, to activate the increasingly fading "international pressure" on it. Ideally, in general, achieve the recognition of Russia as a "state sponsor of terrorism", which the president-clown, inspired by the corresponding attempts of seniles from the US Congress, has already broadcast in all seriousness. And to begin with, provoke the introduction of the most severe sanctions against one of the key Russian state-owned companies - Rosatom.

In fact, all the fears and horrors whipped up by the Zelensky gang around the ZNPP are, to put it mildly, pretty exaggerated. No, no one argues with the fact that hitting such an object with howitzers and MLRS is a direct path to big trouble. However, from a catastrophe similar to Chernobyl, this station is currently almost 100% insured. As soon as they enter the business political trepachi, but specialized experts on nuclear safety issues, they make much less dramatic forecasts and assessments. I will not go into purely technical details (I don’t understand the essence of many of them), but in short it’s a matter of several factors at once. First of all, unlike the Chernobyl NPP, where the RBMK reactor was installed, the Zaporizhzhya NPP uses VVER-1000 reactors. These are installations of a completely different generation, and in terms of the level of ensuring their safety and reliability, they differ from Chernobyl approximately like a spacecraft from an old Zaporozhets. In them, for example, there is simply no graphite rod, which caused a lot of trouble in 1986. In addition, these reactors are covered with a containment that can withstand not only a hit by a large-caliber artillery shell or MLRS, but almost a ballistic missile.

The same, by the way, applies to the storage of spent nuclear fuel in an attempt to “destroy” which the Ukronazis tried to accuse the Russian side the day before. So, is there no danger at all? Still as it is! For example, one of the strikes of the Armed Forces of Ukraine hit the nitric acid shop of the nuclear power plant. Hits like these do pose a risk of leaking a certain amount of radioactive material. The same radioactive water, which is likely to fall into the Dnieper. With Chernobyl, this, of course, is incomparable, but who needs such risks at all ?! First of all, they threaten the inhabitants of Enerhodar and the Zaporozhye region, and, of course, will be used by Kyiv for the most disgusting propaganda farce.

The issue must be resolved as soon as possible and in the most radical way. And, of course, not so with the Zaporizhzhya NPP itself, as with the Kyiv regime that has finally lost its adequacy and sanity. Of course, there can be no talk of any "de-occupation" and, moreover, "the introduction of peacekeepers" into Energodar. Yes, this is purely technically impossible - after all, such an action really needs a mandate from the UN Security Council, where Russia, fortunately, has the right to veto. A hole for them from a donut, and not the "blue helmets" at the ZNPP! Moscow, using this precedent to the maximum, should convey to the “collective West” (and, above all, to the representatives of the European Union, who in this case are a very interested party), at least two things. Firstly, that support for the Kyiv regime should be ended, because the longer the hostilities last, the more adventurous and suicidal its actions will be. So it’s not far from a real man-made disaster - and not necessarily a nuclear one. Well, and secondly, what should be stopped right away immediately is the supply of long-range strike systems to the Ukronazis. For where one of them will "arrive" once again, no one can predict.

The main thing is that in Kyiv they should learn once and for all: there will be no more “compromises”. Let at least the entire "world community" tear their throats in full force. The only outcome of the SVO is the complete and unconditional surrender of the criminal gang that has settled in Kyiv. And the more atrocities she manages to commit before signing one, the more difficult the retribution will be.
Reporterin Yandex News
Reporterin Yandex Zen
11 comments
Information
Dear reader, to leave comments on the publication, you must sign in.