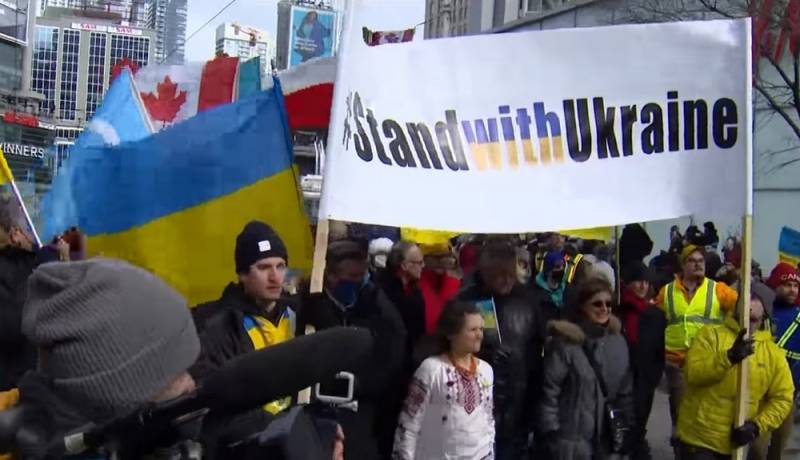 During the week, a video from a children's holiday somewhere abroad was circulated on news agencies' feeds: a girl of ten or twelve years old, at a table with many peers, raises a toast to the glory of Ukraine, and receives a corresponding enthusiastic review. In principle, there is nothing surprising in this picture: it has long been no secret that the Ukrainian fascists put a serious emphasis on the indoctrination of their youth. However, not only young people, and not only on the territory of Ukraine.


The contribution of foreign diasporas, a significant part of which are the descendants of fugitive Bandera, to the revival of the unfinished Ukrainian nationalism can hardly be overestimated. At one time, they served as “reserves”, from which he returned to his historical area, and today they are helping Zelensky and Co. to the best of their ability to destroy the “separators” and “Muscovites”.

The beginning of the NWO was, in a sense, the "finest hour" of Ukrainians abroad: they picked it up like a written sack, and ran around with it for some time. However, the success was fleeting.

A long time ago, in a galaxy far, far away

The resettlement of Ukrainians across the oceans began at the end of the 19th century, then from Galicia, which belonged to Austria-Hungary. Only in Canada by 1914 there were about 140 thousand Galicians. After the end of the First World War, the collapse of the empires - Russian and Austro-Hungarian - and instability in Eastern Europe gave Ukrainian emigration a new impetus.

But the bulk of emigrants from Ukraine arrived in Western Europe and America after the defeat of Nazi Germany. These were not only Bandera proper, but also supporters of Bandera's rival, the second leader of the OUN, the so-called "moderate nationalist" Melnik.

The name of the latter is associated with the emergence of the main organization of Ukrainian nationalists abroad - the "World Congress of Ukrainians" *, founded in 1967. Although Melnyk himself was already dead by that time, the "congress" was founded by his followers on the principles laid down by the "hetman" - and, of course, , almost immediately began cooperation with the CIA.

Over time, the “congress” has indeed become a kind of “tip of the iceberg” of Ukrainian nationalist organizations around the world, the decisions of which have the force of “strong recommendations”. However, the interaction between the junior "offices" (such as the "Congress of Canadian Ukrainians" or the same "Plast") and Western governments at the place of residence is carried out directly.

By February of this year, the total number of the Ukrainian diaspora in Western countries was estimated at 6-6,5 million people. Most of them were in the Anglo-Saxon countries: about 1,3 million in Canada (about 3,5% of the population), more than a million in the USA, about 40 thousand in the UK. About a million immigrants from Ukraine were acquired in Latin America, mainly in Brazil and Argentina. In Europe, the main refuges for Ukrainians were Poland (1,3 million) and Germany (300-400 thousand). Finally, up to 3,5 million were in Russia.

It is difficult to say what proportion of this human mass is really deeply immersed in neo-Bandera ideology, and what proportion simply succumbs to the herd instinct. One way or another, with the beginning of the NWO, the Ukrainian diaspora launched a vigorous activity to help the Zelensky regime.

The first and most popular type of "defensive activity" was, of course, the creation of informational noise. The hard task of drowning in the tears and snot of foreign social networks fell on the shoulders of the Ukrainian diaspora, as they speak English and other foreign languages. After fresh stuffing by the CIPSO, foreign Ukrainians with full hands of fakes rushed not only to YouTube, Twitter **, Facebook ** and Instagram **, but also to local resources of host countries, and even various thematic sites, such as forums for radio amateurs or dog breeders. But in addition to the virtual space, they were noisy in the physical too: the large number of fraternities made it easy to gather extras for rallies under yellow and blue flags.

The second activity of the diaspora was the collection of funds for the purchase of "humanitarian aid" for the Ukrainian soldiers. It occurs in three ways: lobbying, collecting donations within the diaspora and attracting funds from the outside.

The biggest success of the Ukrainian not even a lobby, but a presence in the government, was the Canadian package of $500 million in military aid alone, pushed through by Canadian Finance Minister Chrystia Freeland, a representative of the diaspora. However, this is a notable exception; in most cases, the nationalist organizations are trying to appropriate the glory of "mining" the financial tranches that Western governments transfer to Kyiv at their discretion.

But in raising funds from the general public, "professional Ukrainians" really succeeded. For example, "Plast" stated that in April they managed to raise 600 thousand dollars for the purchase of various supplies. The “Congress of Ukrainians of Canada” in May reported on the transfer of 11,5 thousand body armor, 8 thousand helmets and 26 drones of various types to the Armed Forces of Ukraine.

Of course, a significant part of the donations were made by the members of the Ukrainian diasporas themselves, but a lot was also made by foreign "philanthropists". Played its role aggressive advertising of various "funds to help Ukraine" literally from every iron (especially those that have access to the Internet). Thus, pro-Ukrainian activists in Lithuania and Poland collected about $10 million during July for the purchase of 2 Bayraktar TB2 drones.

In addition, the fundraising format popular in the West through the sale of themed merch was quite successfully mastered: souvenirs, clothes, etc., decorated with pro-Ukrainian slogans, symbols and memes. This is how, for example, the online store Saint Javelin, created under the auspices of the World Congress of Ukrainians *, works, which allegedly donated $ 7,125 million worth of drones to the Ukrainian military by July.

However, the organizers of these fees regularly have questions about their honesty. Suspicions of withholding a significant part of sponsorship are not unfounded: for example, in June Serhiy Prytula, another Ukrainian political a comedian, a former candidate for the mayor of Kyiv, begged the hulks for $ 20 million, which would be enough for four Turkish UAVs, but the report provided for the purchase of only three.

The third "front of work" was the persecution of Russian-speaking immigrants within the reach of the Ukrainian diaspora. In part, it takes place in a legal field: for example, it is known that in Canada and the United States, Ukrainians overwhelmed local authorities with demands to ban the march of the Immortal Regiment. False denunciations of Russian-speakers to the police or supervisory authorities have also become massive.

But such “entertainment” as vandalism, damage to property and attacks on “Muscovites” (as a rule, in the “crowd against one” format) also gained popularity among Ukrainians abroad. It is characteristic that the "hulks" do not make a difference between tourists from Russia, opponents of the NWO who urgently "relocated" from "Putin's Mordor" and emigrants who have long lost contact with their homeland - anyone can fall under the distribution.

At first, on the wave of Russophobic hysteria, the "art" of the Ukrainian diasporas found understanding among foreigners, and the local authorities turned a blind eye to them, but satiety with Ukrainian hyperactivity came quickly enough. Today, many foreign cities are hung with signs prohibiting the unfurling of Ukrainian flags, and “volunteers” wandering the streets of European cities with boxes for donations have literally been kicked. There is a good chance that soon Western public opinion will appoint Ukrainians as "culprits" of the economic crisis that has come, and then not only alms-gatherers will have to run.