The end of the "world factory": how and why the West "de-industrializes" China 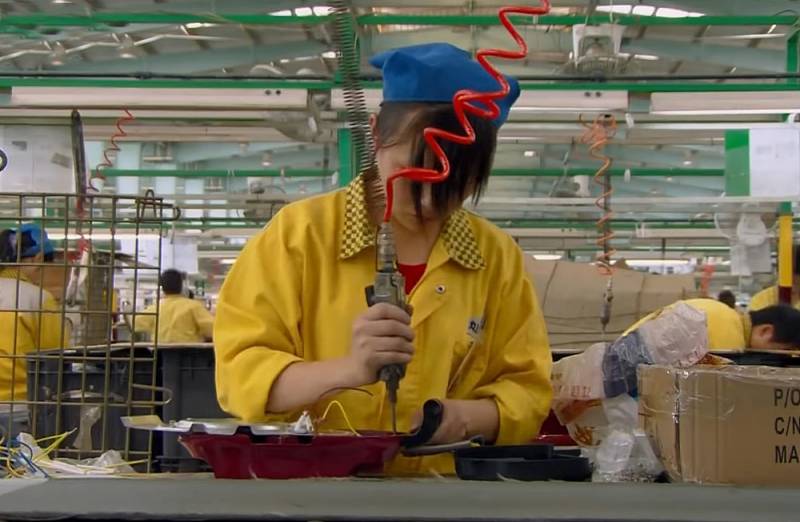 The “Taiwan crisis”, which began after the provocative visit of the head of the lower House of the US Congress Nancy Pelosi to Taipei, will accelerate the process of withdrawing foreign production not only from the troubled island, but also from mainland China. The preparation of the collective West for a war with the PRC, no longer commercial, but real, is increasingly difficult to ignore.


The generally recognized status of the “world workshop” has long been entrenched in China, but in the foreseeable future it may lose it.

The beginning of the end of the "world factory"?

The Chinese “economic miracle” was based on several factors at once: cheap labor, favorable conditions provided to foreign investors, a huge domestic market, as well as the desire of Western corporations themselves to gain a foothold in it and transfer production to the Middle Kingdom to reduce costs. However, over time, the idyll began to disappear.

A lot of local companies appeared, which simply copied someone else's intellectual property, using the patronage of the authorities. As the well-being of the population of the PRC grew, so did the requirements for the level of wages. Beijing itself, having reached the level of the second economics world after the United States, began to claim to get away from the status of just an "assembly shop" and turn into an advanced scientific andtechnological center.

The "hegemon" could not stand this, and under President Donald Trump, the United States began a trade war with China. It was then, in 2018, that the first noticeable wave of the withdrawal of production from China to other countries began. Note that the “imperial” Trump dreamed of the return of American corporations to America, but their owners had a different opinion on this matter. Vietnam, India, a number of other countries in Southeast Asia, as well as Mexico, neighboring the United States, are considered as the main alternatives to China as a "world factory".

Regional rival China joined the WTO in 2007 and has entered into several free trade agreements. First, the production of clothing and footwear from Nike, Adidas and Puma moved there, then furniture from the American company Lovesac. Vietnam became a real competitor to China after 2008, when Samsung Electronics Corporation transferred all its Chinese production there. To date, the South Korean giant has 35 suppliers in the country.

The American corporation Intel has been producing microchips in Vietnam since 2010, and the Japanese Canon has been working there since 2012. In 2019, Nintendo began manufacturing game consoles in this country. Apple intends to diversify its production through Vietnamese sites.

It is not for nothing that India is called the main competitor of the PRC in the region of Southeast Asia for the title of a new “world workshop”. All the ingredients for success are there: a huge mass of cheap labor, tax incentives provided to companies moving to a new location, the mutual desire of New Delhi and Western investors to replace China.

The South Korean concern Samsung has been operating in the Indian market since 2008. Apple's main technology partner, the Taiwanese company Foxconn, as well as another of its contractors, Wistron Corp., produce popular electronic gadgets and components in India. Interestingly, purely Chinese companies Xiaomi and BBK Electronics, which produces Oppo and Vivo phones, moved part of their production to India.

As an alternative to the Middle Kingdom, for example, Thailand is being considered, where Sony, Sharp, Harley-Davidson and Delta Electronics intend to transfer their production, and Google may launch the production of smart home products there. Instead of Chinese factories, H&M, Zara, Mango and Puma now make their clothes in Bangladesh. American cycling brand Kent International and footwear and accessories manufacturer Steve Madden have moved to Cambodia. After the beginning of a noticeable cooling of relations between the United States and China, the transfer of production to Mexico was announced by GoPro and Universal Electronics, as well as the manufacturer of children's toys, Hasbro. Pegatron Corporation, which already has production facilities in Vietnam, intends to invest $1 billion to build a new plant in Indonesia, as well as in India.

As you can see, the process of gradual "de-industrialization" of China has been going on for quite a long time. It was noticeably spurred on by the trade war declared by President Donald Trump on Beijing. Then the coronavirus pandemic and related restrictions contributed to the destruction of China's status as the "world's factory", when many production chains were disrupted. Now, before the prospect of the beginning of the "hot" stage of the conflict with the United States over the island of Taiwan, this process will only accelerate. So, it is reported that Apple is now diversifying the production of its latest smartphones as much as possible, dividing the volumes between China and India.

In fairness, we note that not everything is going as well for Western investors as they clearly would like. In 2019, with a scandal, it was revealed that the Taiwanese Foxconn uses child labor in the production of gadgets. In 2020, at a Winstron plant in India, workers staged a pogrom, believing that they were deceived with salaries. In the same year, during the coronavirus pandemic, Vietnamese workers were forced to live in tents right on the territory of assembly plants so that they would not be sent into self-isolation. The deployment of high-tech industries requires trained local personnel, which is often a problem for foreign investors eager to save money. Also, as far as possible, "de-industrialization" is hindered by China itself, exerting pressure at all levels and taking advantage of "bottlenecks" in the supply of a number of components for production chains.

Be that as it may, the process of successive “spinning off” of the Western world from Chinese industry is proceeding steadily and will only increase as the conflict between China and the United States over Taiwan escalates.
Reporterin Yandex News
Reporterin Yandex Zen
19 comments
Information
Dear reader, to leave comments on the publication, you must sign in.