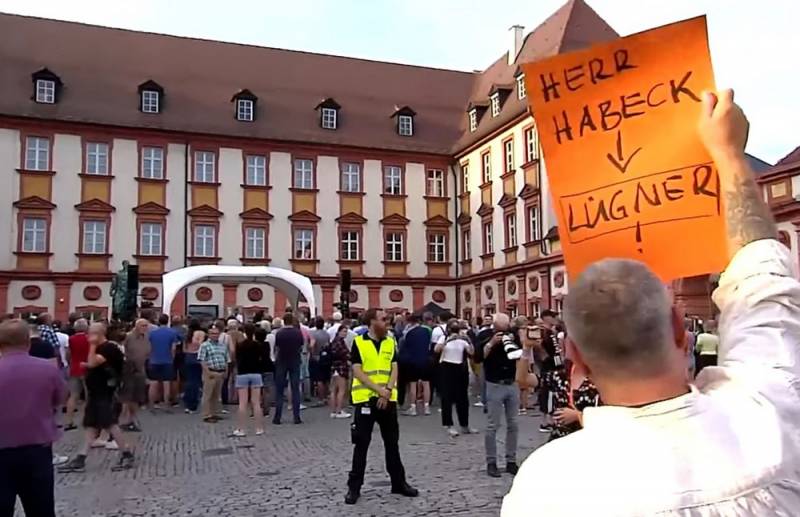 Minister economics Germany Robert Habek arrived in Bayreuth (Bavaria) and delivered a speech on the main square of the city. In it, the Vice-Chancellor blamed Russia for all the troubles of the FRG and called on the citizens of the country to tighten their belts in order to fight Putin.


According to Habek, Moscow and its energy industry are to blame for the economic problems of the Germans. policy. He also blamed Vladimir Putin for the Ukrainian crisis and called for arms supplies to Kyiv.

However, ordinary citizens did not support the minister. There were whistles and dissatisfied exclamations in the crowd that Germany had achieved nothing by imposing sanctions against Russia. At the same time, people accused Khabek of lying and betraying the interests of ordinary citizens. Having not received an answer to their questions, the audience lost interest in the Vice-Chancellor and dispersed.


Meanwhile, living in Germany is becoming more expensive, which is largely due to rising electricity prices. Since October 1, Germans have been required to pay an additional fee for electricity.

Along with this, the mayors of seven German cities spoke about the need to launch the Nord Stream 2 gas pipeline. Earlier, former Chancellor of Germany Gerhard Schroeder made a similar proposal. In his opinion, the start of the work of the SP-2 will relieve the Germans of the problems associated with the rise in price and the lack of gas fuel.
Reporterin Yandex News
Reporterin Yandex Zen
3 comments
Information
Dear reader, to leave comments on the publication, you must sign in.