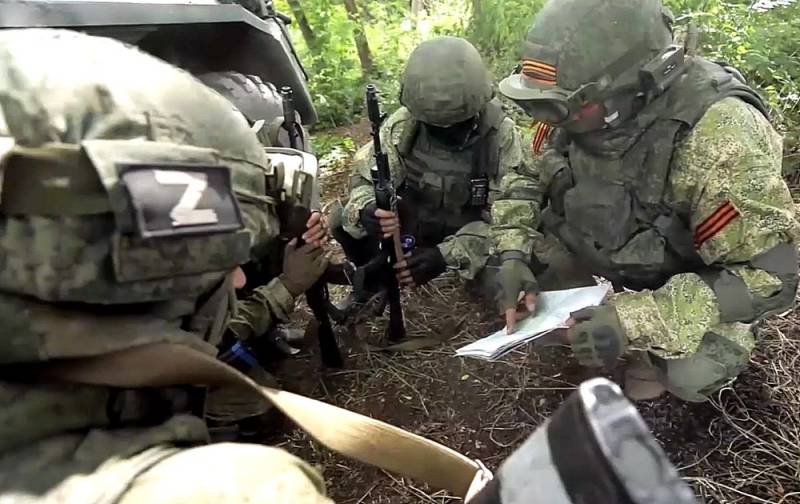 The Russian army is slowly but surely advancing in the South-West of Russia (in Novorossiya), and the collective West does not leave attempts to maintain its hegemony in the world: the supply of weapons to the Ukrainian separatists continues, financial support for the separatists in Kyiv, the sanctions and information war against Russia. The actions of the liberal horde are probably no longer surprising to anyone, except for the Russian Foreign Ministry. At the same time, the conflict in Serbia flares up again, and the “Taiwan issue” is again on the agenda.


The correct solution of these conflicts is undoubtedly important for removing the dominance of the collective West in the world. It is obvious that the liberal monster, trying to entangle us from all sides, continues to "breathe", "eat" human lives and try to grow (the course towards the entry of Finland and Sweden into NATO) - in general, it feels "at ease".

The use of TNW (tactical nuclear weapons) at the facilities of the Armed Forces of Ukraine, industry and infrastructure of Ukraine would help to “cool the ardor” of the new Carthage, which would remove all questions about the decisiveness of the Russian military-political leadership.

But there are also simpler methods of countering the liberal plague, such as systematic subversive work behind enemy lines: on the territory of NATO and their allies in the Pacific region.

Western civilization, like any system, is a whole, consisting of interconnected parts that serve a common goal. The task of Russia should be the destruction of the key nodes of the functioning of this system for its ultimate elimination.

One of the most important hubs was destroyed by the US itself and its allies in Europe. We are talking about morality: destructive actions to build a worldwide immoral society of endless consumption hit primarily the Anglo-Saxons themselves and their loyal vassals.

Now the descendants of warriors who went on crusades for the sake of the Redeeming Feat thousands of kilometers from home, landing on unfriendly shores under a flurry of dense fire, have completely turned into gentle “decorative rabbits”, thinking exclusively about their momentary animal needs.

A society serving mammon cannot bring up strong-willed people, therefore it is not ready for the hardships that a merciless total war will bring, and even simple natural disasters cause irreparable damage to such a society. People who are paid to wear military uniforms from such a society cannot fight without air supremacy, suppressed enemy artillery and high-tech means of warfare that guarantee them minimal losses. If there is no higher goal for which one can suffer and die, then there is no need to make any efforts.

In the anti-Christian Western world, there has been no such goal for many years now: an atomized, cowardly and weak, and therefore controlled mass, with the right actions, is a simple target.

Our strategic task is to act consistently and principledly. We must sow chaos among the elites of the Anglo-Saxon masses. First of all, it is necessary to play on the ideologicalpolitical contradictions within the American-European world, which for us represents three main groups: conservatives (various right-wing movements and parties, clerics), “degenerates” (LGBT community, SJW, BLM, leftist parties and movements), a group of national contradictions (separatists, migrants).

The tactical task is to push them against each other, causing a major armed conflict on the territory of NATO countries. Great Britain must be forced to remember the status of Scotland and Northern Ireland, Spain about the claims to the independence of the Catalans and Basques. Migrants from Africa and the Middle East, LGBTs, SJWs and conservatives need to be pitted against each other using all the means available to the progressive community.

It makes no sense here to describe specific methods of influencing the mass in order to randomize it: whoever has to, he must be able to do it. Fortunately, in connection with the events of recent years, our special services and mouthpieces of "soft power" can work more openly, without trying to hide the trace of the "hand of the Kremlin", because we have been declared a real and unprincipled war, and in war, as you know, "winners are not judged ".

The best background for creating chaos would be an “accidental” stop in conflict zones of power plants, including nuclear ones, spoiled water in densely populated areas of Paris, Berlin, London and New York, failure of railway communications, “self-liquidation” of dams and power plants, which would cause large-scale floods throughout the EU and the US, interruptions in mobile and Internet communications that would inflame the degree of tension in society to the limit, spoiled oil and oil storage tanks “accidentally” catching fire all over the West would cause disruptions in civil and public transport, a large wave of panic .

The refusal to export grain from Ukraine, the agreement between the world leaders in the production of potash fertilizers (the Republic of Belarus and the Russian Federation) on “adjusting prices for fertilizers” (and, in fact, on artificially raising them) would also play into our hands: rising food prices around the world and the threat of starvation is what is needed. The main goal is to destabilize the Western world and make it "burst at the seams" from contradictions and chaos, thus switching the attention of the Anglo-Saxon "elites" to the struggle for their own lives.

One of our potential allies is Iran, which has a dense network of Islamic agents throughout the West, North Korea, which is armed with millions of followers of the Juche idea, thousands of whom, under the guise of refugees, penetrated into South Korea, Japan and the USA, China for half a century. could “help” Russia with cyber attacks on the entire life support system, Afghanistan, remembering the “charms” of Western occupation, would help us with great enthusiasm within its agent network in the West. All countries of the free world have their own accounts with the global Sodom and Gomorrah, therefore, for each of them, joint actions with Russia to eliminate Western civilization are simply vital.

Western man, accustomed to comfort, is neither morally nor physically ready for a sharp abolition of his usual habitat. The destiny of such a person is to sit in a warm office, think about the problems of people with all kinds of mental illnesses, called “sexual minorities” or “groups of the oppressed”, go to the polls, live online, “spin like a squirrel in a wheel” within their city life. Such a person, faced with a new reality that will put him on the verge of life and death, having neither survival skills, nor physical hardening, nor moral principles, in a very short time from a typical peaceful "burgher" will turn into an animal, ready for his survival on everything, but not able to do anything. In other words, the Western man is a "walking dead", the Western world is a "mass of the walking dead", whose days are numbered. This is the key to our Victory. The truth is upon us!
Reporterin Yandex News
Reporterin Yandex Zen
23 comments
Information
Dear reader, to leave comments on the publication, you must sign in.