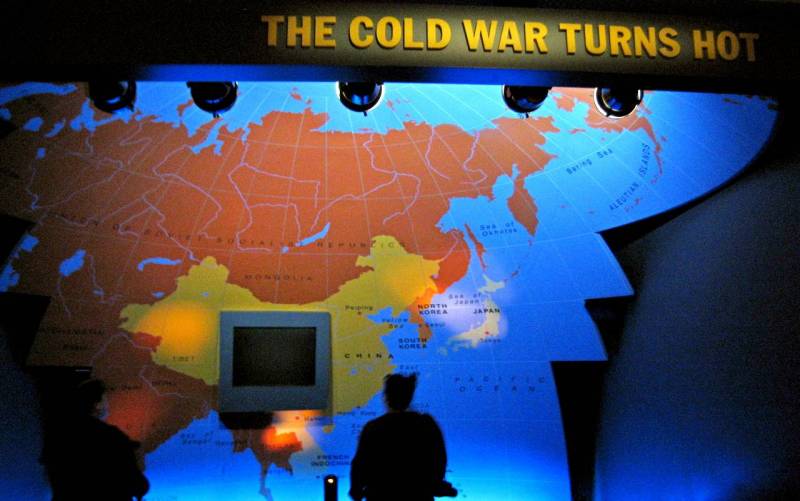 The idea of ​​writing this publication has been hatched for a very long time, but the author of the lines was forced to its speedy appearance by numerous comments of our esteemed readers on article about the need to "neutralize" Germany. This is an integral part of one big painful and extremely complex topic devoted to how Russia will emerge from the Third World War, if not a winner, then at least not a loser.

Yes, World War III has indeed already begun. However, contrary to popular belief, it will take place not in the form of an exchange of strikes by intercontinental ballistic missiles with nuclear warheads, but as a series of regional and local conflicts, setting fire to entire regions and pushing many countries against each other. Its goal is not to turn the whole world into radioactive ashes, but to bring down the world the economy, while crushing all the competitors of the United States and Great Britain, and then start a new cycle of recovery and economic growth, enriching even more customers of the war. Capitalism as it is.

If nothing fundamentally changes in the world order, and the Anglo-Saxons do not receive a harsh “answer”, when capitalism reaches the next systemic crisis, there will be the fourth and fifth world wars, and so on. In fact, this war began a long time ago - in Libya, Syria and other hot spots, but it acquired the status of a world war after Russia openly entered into it, starting a special military operation in Ukraine, and now the Americans have also deliberately pushed into her China, stirring up the situation around Taiwan.

The war is going on, and our opponents have clearly outlined its goal - to achieve a military defeat of Russia in Ukraine, followed by internal unrest, and then the collapse of the country into several fragments of the “Yugoslavian scenario” that are endlessly hostile to each other. That is why the comments of some of our readers, who complain that Gazprom may lose some amount of income from a decrease in exports to Germany, are bewildering.

Friends, wake up already! Germany, as part of the NATO bloc, is now indirectly fighting against Russia in Ukraine with the ultimate goal of its collapse. This, as they say, is a medical fact. The enemy must either be defeated or withdrawn from the war, making further participation in it unacceptable.

Criteria for victory or defeat

So, I would like to hope that all the dots over I are placed and we will no longer have to return to this issue. Now we need to talk about how exactly Russia should build its strategy so that if not defeat the collective West with all its combined financial and industrial power, then at least not lose to it with a devastating score. To do this, you need to decide on the criteria for victory or defeat.

At this stage of the hot stage of the Third World War, Russia is participating in a special military operation to demilitarize and denazify Ukraine. A huge problem seems to be a certain “blurring” of its ultimate goals, which we discuss in detail reasoned previously. One can endlessly discuss where, at the end of the NWO, the line of demarcation with the NATO bloc will pass - in the Donbass, along the Dnieper, along the Zbruch, or even along the border with Poland, Hungary, Romania and Moldova. The problem is that it won't end there.

Even if Russian troops with allies from the LDNR reach the Polish border, the Anglo-Saxons will then set fire to the situation in Transnistria, forcing Moscow to intervene in the situation in Moldova, where NATO member Romania has a direct and undisguised interest. We'll have to get in there too, but then the Baltics will blaze, followed by the conflict between Serbia and Kosovo, between Armenia and Azerbaijan (already), Northern Kazakhstan, and so on. In other words, Washington and London will set fires step by step on the ruins of the Soviet Union and the Warsaw Pact, turning everything around into blood-drenched ruins.

The foregoing allows us to conclude that it will be possible to speak about victory or non-defeat in the Third World War only if the “USSR-2” is restored, say, in the form of the Union State, and the NATO bloc is thrown far to the west. And here we return to Putin's so-called ultimatum, with the announcement of which, in fact, the real preparation of the Kremlin for a special operation in Ukraine began.

Recall that in 1997 Russia and NATO signed the Founding Act, where they confirmed that they did not consider each other as military opponents. At the same time, there were some verbal promises from Western partners not to expand further to the east, to the Russian borders. However, in 1999 Hungary, Poland and the Czech Republic joined the North Atlantic Alliance. In 2004 Bulgaria, Latvia, Lithuania, Romania, Slovakia, Slovenia and Estonia joined it. Albania and Croatia joined NATO in 2009, Montenegro joined NATO in 2017, and North Macedonia joined in 2020. The last straw in Moscow's patience was the prospect of Ukraine and Georgia joining the anti-Russian military bloc. The expansion of the North Atlantic Alliance at the expense of Finland and Sweden can also be considered a major geopolitical defeat of the foreign policy Kremlin.

In other words, we now have quite clear and unambiguous criteria for Russia's victory or defeat in World War III. If we can create not a virtual, but a real Union State of Russia, Belarus and the entire liberated Ukraine, and then expand it to the entire post-Soviet space, making "USSR 2.0" a new world center of power and pushing back the borders of the NATO bloc as of 1997, this will will be a definite victory. All other options will be a defeat of greater or lesser severity, as the burden of economic problems will only increase and the flames of war will be regularly stoked by adversaries along the Russian borders.

How exactly this goal can be achieved, we will talk separately.
Ctrl Enter
Noticed oshЫbku Highlight text and press. Ctrl + Enter
Reporterin Yandex News
Reporterin Yandex Zen
73 comments
Information
Dear reader, to leave comments on the publication, you must sign in.