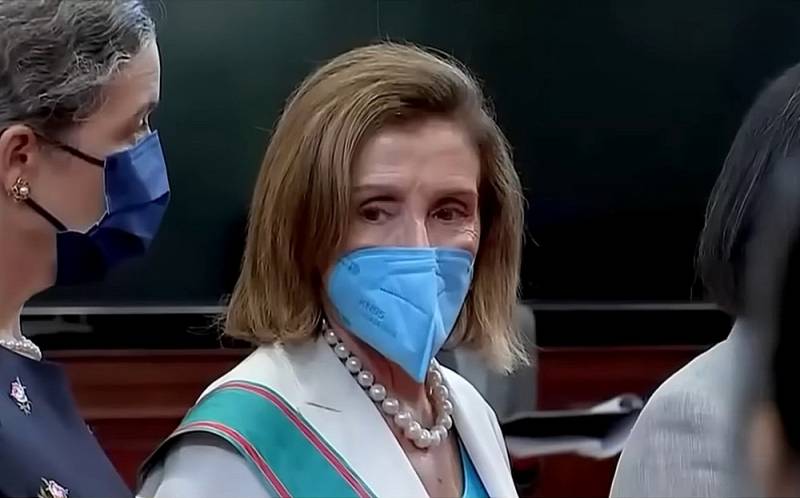 Speaker of the House of Representatives of the US Congress Pelosi, at the age of 82, made a trip to Taipei with her colleagues to annoy China, and received an order from the head of Taiwan's administration. China, by its statements and actions, in every possible way demonstrated the inadmissibility of the growth of official contacts between the United States and Taiwan and warned that this would fundamentally change the nature of relations between China and the United States, which is based on the principle of a united China.

What is Taiwan and why is it a bone of contention?

Taiwan is an island in the Pacific Ocean, 150 km from mainland China, to which at one time, with the help of the United States, the Chiang Kai-shek clique fled, losing the civil war to the communists led by Mao Zedong. The government of the Kuomintang - the party of Chiang Kai-shek - is an analogue of our "whites", that is political a force advocating the preservation of the old feudal order against the new communist ones and, in this regard, has become a true "ally" of the West. True, having fled to a small island with underdeveloped agriculture, already in 1953, Chiang Kai-shek, with a squeak in his heart, was forced to liquidate landownership by carrying out a complex reform to buy land from aristocrats in favor of farmers (or, as they say in the PRC and would say in our country). USSR, fists).

The state that was formed in Taiwan considers the entire territory of China to be its own and even hatches plans for territorial claims to the Russian Far East and many other regions that have long been part of China's neighboring states. The same maps in school textbooks circulating on the Internet, on which China owns both Mongolia and Tuva, are printed in Taipei, not in Beijing.

Over the years of Taiwan's existence, the Kuomintang gradually lost their grip and eventually lost power, going into opposition. This happened, among other things, because the West needed a fresher political force to put pressure on the PRC. Now in power in Taiwan is the Democratic Progressive Party, which sees Taiwan independence as its goal and considers Taiwanese not as Chinese, but as a separate nation. This party copies the entire Western "agenda" - from the legalization of same-sex marriage to green energy - and is even more reactionary than the Kuomintang, because it is even more pro-Western. It is needed only to undermine the plans of the PRC to return Taiwan to its "native harbor".

С economic point of view, Taiwan has become a high-tech domain of Western capital. If you try to find out who exactly owns the well-known Taiwanese IT corporations, then you will fail, falling into the world of fairy tales and legends about giant global companies that arose from grocers. Western oligarchs are fundamentally different from ours in that they always remain in the shadows, in the fog of shares and investment funds rotating on the stock exchange. It seems that the numerous “CEOs” of prominent global corporations themselves are not aware of who exactly they serve faithfully.

It should be noted that the influx of Western capital to Taiwan and the formation of a high-tech industry there, built into the system of dominance of transnational corporations of the West, was due not only to cheap labor and the government controlled by the United States, but also to the fact that the Japanese, who owned Taiwan until 1945, created a fairly powerful industrial base. They used the island as an industrial hub to expand their imperialism in Asia. Many supplies for the Japanese army, moving deep into the continent, came just from Taiwan. So after 1949, the island had only to reorient itself to the new metropolis.

In turn, the Chinese did not sit idly by, and after the start of "reforms and opening up", they were engaged in the economic development of Taiwan on a daily basis. They offered very attractive conditions and profitable investments to local companies and businessmen, inclining both ordinary Taiwanese and the "elite" to fruitful cooperation due to historical, cultural and geographical proximity to the mainland. Today, Americans are especially overexcited about Taiwan, partly because Chinese capital, controlled by the CCP, is playing an increasingly prominent role in the Taiwanese economy, and many Taiwanese youth are choosing to move to the mainland in search of higher wages and more affordable education. The situation is not far off when the majority of the population of Taiwan ceases to support the government and prefers peaceful reunification with the PRC according to the well-known principle of “one country, two systems” (that is, while maintaining autonomy and capitalism on the island, as happened in Hong Kong and Macau).

The political separation of Taiwan from the United States in favor of China in the context of the new Cold War will have a significant impact on the balance of power on the world stage due to the economic dependence of the West on Taiwanese industry. Therefore, the United States, on the one hand, is intensifying "support for democracy in Taiwan", and on the other hand, it is adopting a multibillion-dollar plan for import substitution of chipsets.

Of course, everyone is well aware that the accession of Taiwan to the PRC is inevitable. Huge, one and a half billion China has become an economic superpower and claims to be a political superpower, and the return of Taiwan is an important element in the ideological building of the PRC and the ruling CCP. The strength of opposition to the "reunification of the Motherland" was initially entirely determined by the hegemony of the United States and the West, and as America's power withered and China grew, the balance of power increasingly skewed towards resolving the "Taiwan issue". All the political fuss around Taiwan is connected only with when and how this "reunification" will take place and how the US will play the opportunity to put a spoke in the wheels of the PRC.

The flight of Pelosi's plane to Taiwan turned into a reality show, the collective scriptwriters of which saw great intrigue in the reaction of the Chinese authorities. Someone hinted that “the Chinese will shoot down the plane”, someone was just waiting for this, intimidating the start of a third world war. Numerous “experts” around the world whipped up a stir, telling that China was in zugzwang, that President Xi cannot lose face because of “Confucian ethics” and “Chinese mentality”, that he was overthrown by the “Komsomol”, that the army China has no combat experience, etc., etc. In short, speculation, intrigue, multiplied by incompetence and nonsense, hastily chopped into an information vinaigrette for the sake of clickbait.

After the delegation of deputies from the United States landed, the Russian media space was filled with slaps in the direction of the leadership of the PRC, disappointment swept through the kitnet, and the West breathed a sigh of relief, continuing to reason about “how easy it is to ignite political passions.”

The bottom line is that a real political act (the visit of the US delegation) was completely dominated by a completely virtual media hype. Even if we assume that China would shoot down or force-land the plane with Pelosi, this would not change anything in objective political reality. Claiming that a single event, no matter how large and no matter what the characters involved, is capable of provoking a war between China and the United States is the same as believing that the Sarajevo massacre was the cause of the First World War. If objective contradictions are ripe, there will always be a reason to uncover the guns. But absolutely all commentators, experts, politicians, analysts and other couch and academic Sinologists and semi-Sinologists made their judgments about the situation exclusively in the area of ​​the subjective. Will the old woman be crazy enough to send a plane to Taipei? Will Xi have the will to bring her down? Will the US Navy intervene? Etc.

So, of course, Pelosi wiped out mighty China, but only in the virtual world of clickbait journalism, blogs, and kitchen talk. In reality, her visit marked another stage in the aggravation of relations between the United States and China, a slow but confident move by the United States to abandon the principle of recognizing a united China in order to provoke another armed conflict. Of course, the US won't directly go to war with China over Taiwan, because that doesn't make sense. Of course, sooner or later, China will annex Taiwan peacefully or by force. But how and when is decided not in connection with the flights of American deputies, but after a military-political assessment of the situation.

People who are so fond of falling into historical and political subjectivism should carefully re-examine Putin's position on the special operation. In the West, they say this: the bloody dictator woke up on the wrong foot and decided to unleash a "senseless war." That's what they call the special operation: "Putin's war." But Vladimir Vladimirovich himself long and languidly explained in his numerous speeches those objective processes that forced the leadership of the Russian Federation to start hostilities in Ukraine. Of course, he did not reveal the fullness of the objective political reality, the contradictions in which led to such a complex decision, throwing instead a historical ideology about the formation of Ukrainian nationalism and the Ukrainian state, but nevertheless the essence was clear. In the world of big politics, the subjective decides in general only when the objective factors have matured. Even if tomorrow some crazy president makes the most extravagant decision, for example, orders a missile attack on a neighboring country, this will not fundamentally change anything. It will be removed, the country will apologize, in a couple of weeks everyone will forget everything, and life will go on as usual. Another thing is if objective contradictions are ripe, then everything changes dramatically after the most insignificant event.

Objective contradictions between the US and China are growing, primarily at the initiative of the American oligarchy, which is concerned about the weakening of the hegemony of its imperial state. But the resolution of these contradictions is still far away. None of the parties is yet ready for a full-scale conflict, even in the economic field, so all the sharpness of political rhetoric and hooligan antics, although it can end in local tragedies, does not change the overall situation.
Reporterin Yandex News
Reporterin Yandex Zen
9 comments
Information
Dear reader, to leave comments on the publication, you must sign in.