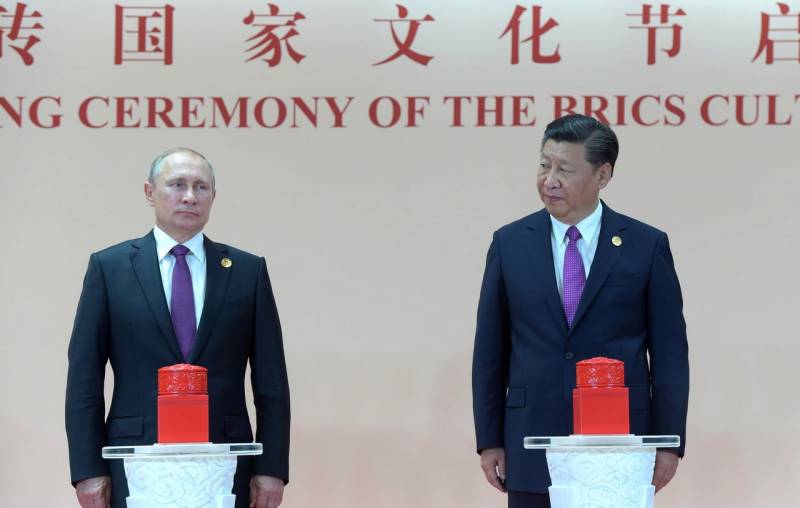 The scandalous visit of the head of the lower house of the US Congress Nancy Pelosi to Taiwan has undoubtedly become a major international topic. Despite the fact that Beijing threatened to prevent the American plane from entering its airspace without permission, it landed safely in Taipei. What will be the further actions of the Chinese leadership?

To be honest, the author of the lines was very amused by the millions of angry comments that our compatriots scribbled. Say, "the Chinese dragon turned out to be paper", the Chinese do not know how to fight, Comrade Xi did not help his aircraft carriers, the United States "bent" the Celestial Empire, and so on in the same vein. The comment left on the social network by the respected head of the Chechen Republic Ramzan Kadyrov turned out to be quite typical:

In 15 minutes, let's see who is the "great power": the US or China.
In this regard, I would like to ask a question, what did you all, in fact, expect? That the PRC Air Force will shoot down a plane with a third person in the United States, automatically declaring war on the world's strongest military power? And this against the background of the fact that President Joe Biden stressed that Washington still recognizes the principle of "one China"? That is, because of the uninvited visit of the head of the lower house of the US Congress to Taiwan, which has a problematic legal status, to kill her and everyone on board?

Then you can ask the following logical question to our jingoistic patriots who are thirsty for blood. Why didn’t the Black Sea Fleet of the Russian Federation sink the British destroyer Defender, which violated Russian borders and defiantly entered the territorial waters of Crimea? Did not have time? Why didn’t the Russian Aerospace Forces catch up and sink it from the air? Why didn't Moscow declare war on London? It's different, right?

If you call a spade a spade, Washington simply caught Beijing at its word and took advantage of the opportunity, knowing full well that it is not yet ready for a real war with the United States and the AUKUS bloc.

At first, and China, and all other advanced powers are critically dependent on the supply of microprocessors, which are manufactured in Taiwan. About what is the share of Taipei in the world microelectronics market and how China, the USA, the EU, South Korea, India and Japan are now hastily producing its import substitution, we told previously. In the event of large-scale hostilities, Taiwanese industry is highly likely to be destroyed, unintentionally or on purpose. The process of import substitution of microprocessors, which began in 2021 after a drought in Taiwan, may take at least three years.

Secondly, the special operation to return the rebellious island will inevitably lead to the imposition of anti-Chinese sanctions and the blocking of the Strait of Malacca for Chinese imports and exports, which should bring down all economic China indicators. Strictly speaking, for the sake of this, everything is started. The struggle for the survival of the Celestial Empire, which is critically dependent on maritime trade, will take place precisely on the seas and oceans, for which Beijing is building such a powerful navy. Even now, the PLA Navy has more pennants than the US Navy, but the quality of the American fleet is higher due to the presence of 11-12 aircraft carrier strike groups and the largest Marine Corps in the world.

Немного made fun of one comment in the spirit of "Comrade Xi's aircraft carriers under construction did not help." Yes, those under construction really can’t help. So far, only the light aircraft carriers Liaoning and Shandong are in the ranks of the PLA Navy, which are seriously inferior to the Nimitz in terms of combat capabilities. Equipped with catapults for taking off heavy carrier-based aircraft, the second-generation Chinese aircraft carrier Fujian has just been launched and is still being completed, so it really cannot help Comrade Xi. It is necessary to count only those AUGs that are in service.

Can "Liaoning" and "Shandong" as part of an aircraft carrier strike force today really resist the US Navy's AUG, led by the heavy attack aircraft carrier "Harry Truman", which, after an attack on Taiwan, will block the Malacca Strait for Chinese merchant ships? Doubtful. Especially if the British defiantly send their Queen Elizabeth with escort ships to join the Truman. So to speak, they will demonstrate the unity and determination of the AUKUS allies. If necessary, the power of the Anglo-Saxon aircraft carrier strike force can be increased even more. The PLA Navy is simply not yet ready for war with such an adversary, and he is aware of this.

Thirdly, waiting for the immediate start of a special operation to liberate Taiwan immediately after the landing of the plane with Pelosi in Taipei can only be completely naive and ignorant of military affairs. The thing is a no-brainer.

Despite the fact that all the plans for an amphibious assault on the island, of course, have long been developed by the PLA General Staff, first it is necessary to make a large-scale deployment of troops and fleet. It will take more than one day and even more than one week. Remember how and how long the Russian troops were drawn to the borders of Ukraine. Yes, we have more distance, but still. For a real amphibious operation into Taiwan, mainland China will have to assemble a powerful shock fist, which will not go unnoticed.

So, we came to the conclusion that ridicule against the Chinese comrades and reproaches that they did not dare to unleash a nuclear war with the United States by shooting down a plane with the head of the lower house of the American Congress are simply inappropriate and stupid.

Pivot to the West?

Knowing the real state of affairs, the White House simply deftly caught Beijing on the word, exposing Xi Jinping as a "talker". On the eve of the upcoming elections, this could have a very serious impact on the domestic political agenda of the PRC. Now the Chinese leadership is faced with a choice - either to respond harshly, saving face, or to wipe themselves and bend before Uncle Sam.

Let's hope that Beijing still chooses the path of fighting for its national sovereignty, as this gives us a good chance to win. Until now, the PRC has adhered to a conditionally friendly neutrality towards Russia in its showdown with the collective West. In words, the Chinese supported us, but in reality they didn’t help us much, taking advantage of the difficult economic situation in order to get maximum preferences for themselves, and buying up natural resources and Soviet Technology on the cheap. They sat and patiently waited whose corpse would float down the river, Russia or the USA.

Now the Americans themselves were slapping the Chinese leadership on the cheeks, publicly making it clear that they, in fact, were also at war with them. We can say that Russia and China are finally in the same boat. Now the Celestial Empire is left to either humiliately “crawl away”, or actually stand shoulder to shoulder with Russia against the collective West.
Reporterin Yandex News
Reporterin Yandex Zen
21 comment
Information
Dear reader, to leave comments on the publication, you must sign in.