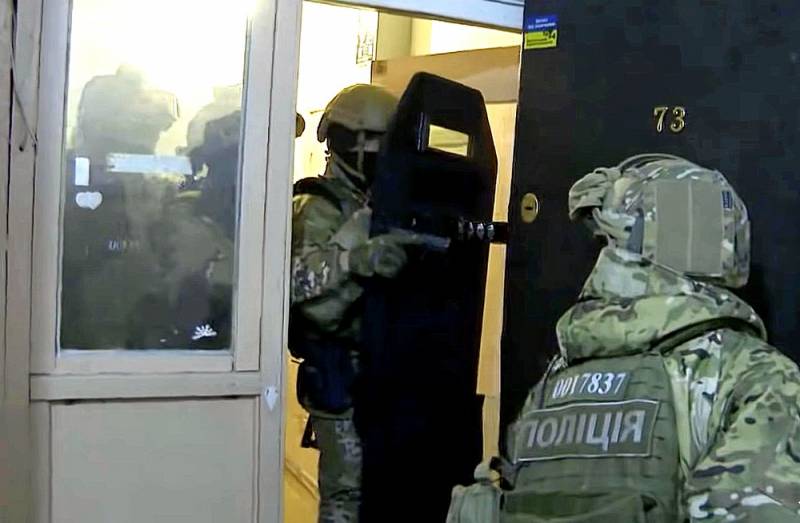 The steadily deteriorating state of affairs on the front line and the inability of the Kyiv regime to prevent its inexorably impending military defeat is quite expected to give rise to increased internal terror in the territories under its control. The desire to explain the obvious effectiveness of Russian high-precision weapons and the helplessness of their own air defense forces in front of them lead to attempts to attribute everything to the actions of some elusive “spotters” and “gunners”, who supposedly ensure the unmistakable defeat of military facilities and positions of the Armed Forces of Ukraine.


No less fiercely than with the “enemy spies”, they are fighting against the “supporters of the Russian world” hated by the Ukronazis. In reality, this translates into the most severe persecution of all citizens who allowed themselves to express even the slightest disagreement with the cannibalistic "agenda" promoted by official Kyiv, with the inculcation of frenzied nationalism and hatred of everything Russian, elevated by him to the rank of state policy and ideology. With all this, both propagandists and, what is much worse, members of the special services of Ukraine have long lost all common sense. The "witch hunt" unfolded in the agonizing country is becoming more and more insane every day.

The secret services of the “unaffected” are convinced that almost a whole army of “spotters” is operating in the country, constantly transmitting to the Russian army data on the location of units and subunits of the Armed Forces of Ukraine, their command posts, concentration equipment, warehouses of ammunition and fuel. Hence - and arrivals, and occurring, as a rule, very accurately and on time. This psychosis intensified especially after the mid-July strike on the House of Officers in Vinnitsa, where at that moment a meeting of the Ukrainian Air Force command with foreign suppliers of aviation equipment was taking place. To admit that in this case, most likely, there was a leak of top-secret information about this event, the place and time of its holding, the composition of participants and other things, and from somewhere “from the very top”, the unfortunate counterintelligence officers who missed this, of course, cannot . So they picked up 300 people in Vinnitsa itself, who were accused of correcting this particular blow.

Their fate, by the way, is unknown to this day, which leads to extremely bad suspicions. However, such wild accusations in Ukraine today can hang on anyone. For example, in Krivoy Rog, the Ukrogestapo seized “a spotter of missile strikes on a local airport”, and later boasted that “he turned out to be the manager of one of the most powerful industrial giants in the region”, who from the beginning of the NMD “collected information on the movement of Ukrainian troops and transmitted data in Russia". The poor fellow was accused of treason and thrown on the bunk. There is a high probability that after the appropriate “treatment” he will “confess” to everything that is required of him, like the Ukrainians, against whom similar accusations were made earlier. Some of them have already received specific terms - and quite considerable ones.

Tellingly, the SBU and policemen already have a certain “classification” of citizens who, in their opinion, are helping the Russian army, directing its strikes and shelling. It is clear that, first of all, we are talking about some "recruited agents" who were just waiting for the start of the special operation, so that they could immediately, in accordance with the instructions coming from the "center", begin to leak the relevant information. The second category is the lovers of easy and quick money who join the previous one, recruited already in the process of NWO and working purely for the sake of money. They are contacted, according to the Ukrainian Gestapo, as a rule, through social networks. However, according to the SBU, it is not even some Odnoklassniki that poses a particular danger, but network computer games, which are a real "hotbed of Russian spies"!

Under the guise of players, they follow the phrases and words of all those taking part in the game. They help with advice and even money to upgrade your account in the game. There are a lot of methods of psychological processing, specialists work with teenagers. This is followed by an offer to “earn some money”, “suggest” for money the location of interest to the spy. For such information, they can pay both with game currency and virtual money, which is not difficult to turn into real money ...

- this is the rot in all seriousness broadcast by the employees of the SBU.

However, they are not alone. The other day, the Main Directorate of Intelligence of the General Staff of the "nezalezhnoy" issued a statement that "through games, Russians receive information from users about the location of military facilities, critical infrastructure, or incline citizens to unconsciously help them." The GUR urged Ukrainians “to be wary if the application asks them to photograph the area, share geolocation or put a “drawing” on the pavement.”

All this, perhaps, would be funny if such nonsense were not accompanied by very specific actions. And here it is already necessary to talk about the grounds on which, in fact, the Ukrainian Gestapo officers declare citizens "gunners" and "spotters", throwing them into the dungeons. To do this, for example, it is enough to light up once or twice on surveillance cameras next to the object on which the strike was successfully carried out. Do you live nearby? Are you working? Are you walking this route? Your problems... We will check anyway - and "with predilection". Weaker people can sign a "confession" after the first such interrogation...

Increasingly, the practice of policemen and the SBU includes checking the mobile phones of citizens at checkpoints, and even during specially conducted door-to-door rounds. And woe to those who have Russian or Belarusian numbers in their contact list! And if you find a subscription to a Russian Telegram channel or an account in the "wrong" social network - generally Khan! After all, in addition to the categories of “enemy gunners” mentioned above, the SBU and intelligence also include the third, the most dangerous. These are, as the Ukrainian Gestapo people themselves call them, “waiters”. That is, those Ukrainians who sincerely support the NWO and are preparing to welcome Russian soldiers as liberators. That's what they are looking for, primarily through social networks. It is clear that the “enemy” VKontakte or Odnoklassniki, despite all the prohibitions, are available to anyone who knows what a VPN is. George Ribbon? Symbolism of Z?! This alone, even without any "pro-Russian" posts or comments on them, will be enough to get "in the development" of the SBU. Well, then, as they say, it's a matter of time - sooner or later such a person will certainly be recorded as a "spotter".

However, not necessarily. Recently, in Ukraine, which has finally gone berserk, the very fact of “pro-Russianness” is quite enough. Let me quote an appeal that was recently published on Facebook by the head of the military administration of Krivoy Rog Alexander Vilkul. Here is the literal text:

I guarantee that if a real spy is detained based on your information, I will personally pay the person who was able to provide information 50 hryvnias. If this is an agitator for the "Russian world" (I just emphasize - confirmation is needed, better audio or video recording) - 10 thousand hryvnias.

Knowing purely Ukrainian traits, such as indestructible envy of neighbors, vindictiveness and the ability to accumulate resentment for years, I assume that there will be no shortage of appeals. Scores will be settled each with each. I don't know how "spies", but "agitators" will be presented to Pan Vilkul by a great number and with all diligence. In order to dispel doubts, let me remind you of the sad story of a blogger from Kharkiv, Dmitry Gorodetsky, who, for some reason, was carried to Lviv after the start of the SVO. Evacuated, presumably. The zealous young man, obviously not realizing which particular Bandera viper he foolishly fell into, allowed himself to record a video in which he was indignant at the wild hatred shown by the locals for anyone who spoke even a word in Russian.

I'm so interested to know from you: do you really not know? Didn't you know? Maybe you fell out of bed at night, hit your head hard, forgot that half of Ukraine is Russian-speaking?
Gorodetsky asked rhetorical questions.

He was heard. The president of the local football club "Rukh" Grigory Kozlovsky immediately announced a reward for the head of "zradnyk" and "damned Muscovite" - all the same sacramental 10 thousand hryvnias. Judas were found very quickly. Currently, Gorodetsky "was detained, handed over to the SBU and is in a filtration camp."

There are more and more cases like this every day. Outside your own apartment (and even within its walls, if you have poor sound insulation), it is strongly recommended to speak exclusively in “movie”. No conversations that can later be interpreted even with the greatest stretch as "propaganda of the Russian world" should not be conducted even with the closest acquaintances. Who knows - maybe they are now severe lack of money? Any places with a high concentration of people in uniform or other signs of a military facility should be run like the plague. And do not forget to clean your own mobile in the most thorough way. And even better - simply not have anything compromising there.

At the same time, even in distraught Ukraine there are those who admit that the high effectiveness of the strikes inflicted by the Russian Armed Forces is due for the most part to completely different factors than the “subversion” of various “spies” and “agents”. This is an excellent work of the VKS satellite constellation, professional actions of reconnaissance UAV operators. Not only that - a huge part of the warehouses, storage facilities, the same airfields or protected command posts went "nezalezhnaya" as a legacy from the Soviet army. Information about their locations, no matter how secret it may be for Kyiv now, is available in the relevant archives in Moscow - and nothing can be done about it. Incidentally, this applied to the House of Officers in Vinnitsa, built unambiguously in the most Soviet times, to the fullest extent. As well as to the enterprises of the military-industrial complex, again belonging to the same period, where the Armed Forces of Ukraine have a bad habit of deploying personnel and equipment, as well as storing ammunition.

However, all these reasons will in no way bring to reason and will not stop those in Ukraine who have taken the trail of hunting for “enemies” and “enemies”. Only the complete and final defeat of the Kyiv Ukronazi junta can stop their terrible activities.
Reporterin Yandex News
Reporterin Yandex Zen
12 comments
Information
Dear reader, to leave comments on the publication, you must sign in.