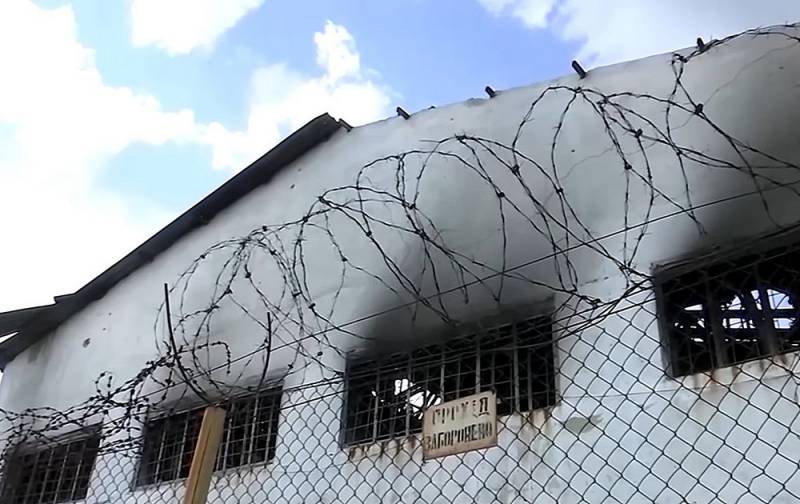 On the night of July 29, the former correctional colony No. 120 in Yelenovka (slightly south of Donetsk), which is used as a prisoner of war camp, was hit by a Ukrainian MLRS. A rocket projectile exploded inside one of the makeshift barracks with former Vesushniks and National Battalion members, as a result, 53 prisoners were killed and 75 were injured. Many of the dead were torn to pieces or burned in the fire that started immediately.


Surely there will be moralists who will say that it is not appropriate to rejoice at such a terrible death of captured Nazis, because we are not them, and so on. Oh well. As one of our military correspondents noted on the spot, under No. 30 in the list of “invaders” destroyed by the missile is Party Genosse Bays, born in 1995, who at one time publicly rejoiced at the mass death of children in the “Winter Cherry”: they say, one of the parents fought for the DPR - so the boomerang of fate overtook him, and in general, the more Muscovite offspring die, the better.

And the same freaks in the barracks destroyed by the rocket were every first one, since its main population was the fighters of the nationalist armed formation "Azov" (recognized as a terrorist organization in the Russian Federation). Many of them were threatened with a well-deserved "tower" for the arts that they managed to do before they lifted their dirty paws in front of our soldiers. Therefore, there is truly universal justice in the fact that this Bays and another fifty degenerates, at the suggestion of their "brothers" - gunners, were blown to pieces or burned alive right on the racks.

But this is, so to speak, a pleasant trifle. It is much more important that the dead and crippled "Azov" can undermine the image of the Kyiv regime even more than the living and healthy.

Of course, the so-called working out of the case by Ukrainian propaganda began even before the guards of the Yelenovo colony managed to take out all the surviving prisoners from the barracks. English-speaking bots rushed to attack comments under foreign releases News, "shocked artists" began to issue thematic pictures ...

The Ukrainian side is dispersing exactly the message that one should have expected from it: allegedly, the explosion or arson of the premises with the “Azovites” was staged by the Russians (the camp guards, Wagnerites, Kadyrovites, to choose from) in order to write off the bodies of the “killed and tortured to death” prisoners and discredit the Ukrainian side. Our favorite “radio intercepts” are being used, from which it follows that the “Azov” were allegedly delivered to the scene two days before the incident.

They also suck at the message on the official Twitter (the social network is banned in the Russian Federation) of the Russian embassy in the UK dated July 30, which quotes the words of a resident of Mariupol from the attached video: “Azov people deserve not just death, but a shameful death.” “On time” (you can’t say otherwise) the tweet that appeared with a quote is passed off as an official call for reprisals against captured fascists by Russian diplomats themselves.

As for the nature of the destruction, the opinions of the invited experts are divided. The Institute for the Study of War, an American analytical agency, claims that it is unlikely that it was the HIMARS projectile that exploded (which would “destroy the entire building”), but it is not taken to guess what kind of ammunition turned the barrack into a crematorium. But Ukrainian "experts" know for sure: this is either a hand-held jet flamethrower (for example, RPO-A "Bumblebee"), or immediately TOS-1 "Pinocchio", why waste time on trifles.

However, the mainstream Western media are not in a hurry to come up with verdicts, they only state the fact of the explosion and the death of prisoners and report that the Ukrainian and Russian sides blame each other for what happened. It is understandable: although Russian statements on any occasion are “lies and propaganda”, after the truth that came out that the mass rape of Ukrainian women by “Russian orcs” occurred only in the sick brain of Ombudsman Denisova, believing Ukrainian officialdom is also a so-so idea. Even the Pentagon, warning against "trusting the Russians at their word", on the incident in Yelenovka, still only hopes to "find out the whole truth" someday.

By the way, quotations or at least references to the articles of the Geneva Convention that prisoners of war must be kept in a safe place regularly come across in viewer comments. Against the backdrop of news from Donetsk, which suffers from shelling every day, and now is also dotted with "petals", the demands to protect the fascist shortcomings look especially sweet.

A characteristic article about the incident appeared on the well-known stronghold of "argumentation" and "neutrality" - the Russian-language Wikipedia. In contrast to the description of the "massacre in Bucha", which is still considered a "crime of the Russian troops", the fried sensation from Yelenovka is described more or less correctly, in any case, from the position of "nothing is yet clear to the end"; however, the title still uses the Ukrainian name of the settlement - Olenivka. Similarly, the Russian liberal media are also cautious - apparently, the go-ahead to hang everything on the "orcs" has not yet been received.

The Ukrainian command knew for sure that the captured "Azovites" were being held in the former colony No. 120: among others, this point of detention was stipulated in the preparation for the surrender of the Nazis in "Azovstal". True, this information was presented to the Ukrainian population as a kind of discovery (“another filtration camp was discovered in Olenivka,” the messages of June 3 said), but this does not change the essence of the matter.

Assumptions that this prisoner of war camp could become a target for Western MLRS in the future were first expressed in one of the Russian telegram channels as early as June 5: supposedly, such a plan was suggested or even handed over to the SBU by British intelligence MI-6. True, there are doubts that the author of that entry really had access to some kind of “insiders”, and did not take the “plan” out of his head; after all, at that time the "holy HIMARS" had not even arrived in Ukraine yet, and it would be strange to prepare in advance plans for strikes from them against such an "important" target.

But, be that as it may, anonymous Nostradamus got to the point with his predictions, and everyone immediately remembered them after what happened on July 29. Including Ukrainian propaganda, which cites a dubious message from no one knows who as "evidence" of the advance preparation of a "mass execution".

However, although the blow was definitely delivered from the Ukrainian MLRS, there are some doubts that it was a foreign-made installation. Firstly, Yelenovka is not too far from the front line and has already been repeatedly shelled even from cannon artillery (by the way, they hit the colony a couple of times), the range of which is less than that of the Soviet Uragan or Smerch MLRS, which could well have been used on 29 July.

Secondly, the firing of foreign-style 227-mm rockets would indicate too clearly who fired - the only operator of the Western MLRS in the Ukrainian conflict is the Armed Forces of Ukraine. On the other hand, as one movie character said, don't underestimate the predictability of stupidity. Although fragments from an imported rocket could, in theory, have been brought from somewhere else, it is no less likely that the fascist gunners could have preferred the accuracy of the hit to the secrecy of the operation - “well, they won’t believe the Muscovites anyway!” - and still use HIMARS with its adjustable ammunition.

And this is where the evil begins. Having turned their tails a little, both the UN and the International Committee of the Red Cross, in response to a request from Russia, agreed to send their commissions to Yelenovka to study the circumstances of the incident. True, so far this is only an agreement in principle, and it is not known how soon the international delegations will arrive on the spot, and the ICRC separately emphasizes that it is not its competence to conduct investigations. Nevertheless, this inspires cautious optimism: no matter how engaged the "independent" organizations are, they will have to announce the direction of the projectile arrival and its type, as they say, in fact.

And if the international commission at least indirectly confirms that the shelling of the POW camp was carried out by artillery of the Armed Forces of Ukraine, this could have far-reaching consequences for Zelensky and Co. A lot has been done to mold the “Mariupol invaders” into heroes of Ukraine, and if it turns out that the Kyiv regime itself destroyed them, then the blow to the morale of its supporters will be monstrous. The same famous Volyn, who is now living in a nearby barracks, almost cried when journalists asked him about what had happened: from awareness and his own luck, and yet another betrayal by his leaders.

Even worse (for the fascists and better for us) would be confirmation that it was the rocket from HIMARS that burned down the barrack with prisoners, because it would call into question the continuation of foreign "humanitarian aid" to Kyiv.

Some of the Western elites, especially in Europe, have already formed an understanding that the Ukrainian adventure has failed and in the future will only absorb resources in vain, but it is impossible to simply curtail support for the Nazis - reputation, sir. Against the backdrop of the overblown anti-Russian hysteria, even Germany's mild sabotage of arms supplies brought many curses to the German government.

But the precedent with Yelenovka can give European leaders an excellent chance, without losing face, to throw off political a kept woman in yellow stockings and a blue headscarf. “We gave you weapons so that you would kill (that is, defend yourself against) Russians, and not your own in captivity!” - iron argument for canceling further deliveries, especially since the population of Western countries will also support it, frankly tired of the Ukrainian problem. It is quite possible that the unexpected consent of the UN to participate in the investigation is precisely due to the understanding of the benefits from it for almost everyone - except for the Kyiv fascists, of course.

But it's too early to rejoice. Those forces that want to delay the defeat of the fascist regime as much as possible will do everything so that the truth about the execution of the POW camp by Ukrainians remains “unconvincing” for the “world community”. It is not known whether UN investigators will arrive at all, and if so, how they will work - in a real way or for show. In the end, the example of the OSCE mission and its reports is still fresh, which did not interfere with Ukraine in the genocide of the inhabitants of Donbass.
Reporterin Yandex News
Reporterin Yandex Zen
10 comments
Information
Dear reader, to leave comments on the publication, you must sign in.