New Naval Doctrine: what could be the first Russian aircraft carriers 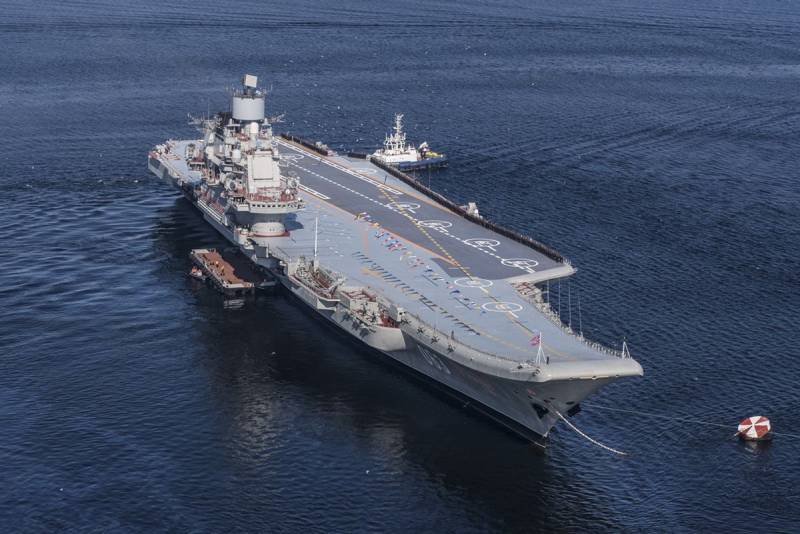 Announced the day before, on the day of the Russian Navy, the new Naval Doctrine is a document of great importance, since it determines the direction of its development for decades to come. The state has finally decided whether it needs foreign naval bases, aircraft carriers in particular and large-capacity warships in general. And it pleases.

No longer a "land power"

I really hope that the updated Naval Doctrine will finally put an end to all these frankly insane discussions about whether Russia needs aircraft carriers or not. Some openly “hype” on this topic, scribbling article after article, in which, with a thoughtful look, they affirm the hackneyed and repeatedly refuted false theses about the alleged uselessness of aircraft carriers, gaining views and readings, while others, having heard enough, thoughtlessly repeat after them. As a result, while the Americans, the British, the French, the Spaniards, the Chinese, the Japanese, the South Koreans and the Turks are building aircraft carriers, strengthening their navies, in Russia this most complex topic has been turned into an outright farce.

Even worse, now not even the notorious aircraft carriers, but simply large-tonnage warships, have begun to be attacked. The reason for such insinuations was the tragic death of the flagship of the Black Sea Fleet of the Russian Federation, the Moskva missile cruiser, presumably due to a hit by Ukrainian anti-ship missiles Neptune. There is a clear substitution of concepts. Instead of making justified claims to those who sent the old, unmodernized ship alone to a hostile coast with a crew that was not trained in the exercises to intercept low-flying anti-ship missiles, for some reason a frankly strange conclusion is made that large warships are no longer needed in principle .

Of course, Russia is not needed. They say that enemy anti-ship missiles will bounce off small boats of the “mosquito fleet” without harming them, or even miss them altogether. The fact that its combat capability directly depends on the size of the ship is completely ignored. The larger the body, the more shock and defensive weapons can fit in it, this is logical, right?

So, to the question of whether Russia needs large-tonnage warships and aircraft carriers in particular, the Naval Doctrine answers as follows:

Why does Russia need a fleet?

He is able to respond with lightning speed to anyone who decides to encroach on our sovereignty and freedom.
This means that up to 40% of the striking power of the Russian "nuclear triad" is tied to the Marine component. Strategic nuclear submarines must be on combat duty and be ready at any moment to deliver a retaliatory nuclear strike against the enemy if he decides to launch a preventive strike. That's just the security of the deployment of our SSBNs has long raised a lot of questions.

We need numerous PLO corvettes and frigates, minesweepers, anti-submarine patrol aircraft, submarines “hunters” for enemy submarines to cover our “strategists”, and so on. This is precisely the priority, the task on which it is necessary to concentrate, without dissipating already small resources. President Putin spoke about this the day before in his address:

We have openly marked the boundaries and zones of Russia's national interests - and economic, and vital, strategic. First of all, these are our Arctic waters, the waters of the Black, Okhotsk and Bering Seas, the Baltic and Kuril straits. We will ensure their protection firmly and by all means.
But when Russia really reliably protects its near and far maritime zone and ensures the stability of the NSNF, then we can seriously think about the oceanic zone, which, in fact, is what aircraft carriers are needed for.

In order not to lie, it is worth listing the national interests of our country in the World Ocean outlined in the Doctrine: maintaining the status of a great maritime power for the Russian Federation, developing the maritime potential and strengthening the defense capability of Russia in the World Ocean, ensuring guaranteed access to global transport communications in the World Ocean, freedom of the high seas and the safe operation of pipeline systems for the transportation of hydrocarbons, the implementation of naval activities in the oceans in order to protect the national interests of the Russian Federation in the oceans, and so on. It is obvious that no “mosquito fleet”, for which some of us drown so much, is simply not up to the task of performing such tasks. When potential adversaries have built aircraft carrier strike groups, they cannot do without their own aircraft carriers and a network of naval bases abroad.

Which, how and when?

The question of which aircraft carriers the Russian Navy needs, who will build them and where, and where they should then be based and maintained, is a very difficult and highly debatable question. It is clear that aircraft carriers are needed only in our two fleets - the Northern and the Pacific. One at a time will not be enough, since from time to time they must be repaired and modernized, which means that for this period the combat effectiveness of the KSF and KTOF will drop significantly. Therefore, the optimal solution is to build a series of four aircraft carriers, two each for the Northern and Pacific fleets. Accordingly, it will be necessary to build the necessary coastal infrastructure for them. Plus, there should be modern carrier-based fighters, escort ships, something needs to be decided with the AWACS aircraft or be content with helicopters.

Where to build such huge ships? Sevmash is busy with orders for submarines for years to come. Two project 22390 UDCs are slowly being built on the Kerch "Zaliv", and so far no News does not come from there. If Russian troops still reach Nikolaev, then options may appear. At the Nikolaevsky shipbuilding plant, large-tonnage ships were once built, up to cruisers or battleships, at the Chernomorsky shipbuilding plant, Soviet heavy aircraft-carrying cruisers, including our Admiral Kuznetsov.

Alas, the Chernomorsky Shipbuilding Company was deliberately ruined and went through bankruptcy proceedings in 2021. All of its equipment was taken out and cut into scrap metal, the territory of the enterprise was planned to be given to merchants. Of course, it is possible to restore it and bring back specialists, but it will take time and serious investments.

What kind of aircraft carriers does the Russian Navy need?

The ideal option would be to build something like the Ulyanovsk ATAVKR with a displacement of 70-80 thousand tons, on a nuclear power and with catapults for takeoff. The question is, will domestic shipbuilders cope with such an ambitious task, having long lost the relevant competencies and not having such experience?

There are extremely high chances that such a technically complex project will turn into a long-term construction, and from the moment of laying down to the commissioning of the first domestic full-fledged aircraft carrier, it will take 15 years, or even all 20. In this regard, I would like to suggest referring to the experience of China and India in construction ships of this type, which have chosen an evolutionary path.

So, China used the Varyag bought from the Independent TAVKR as a training ship under the name Liaoning, having trained its deck pilots on it and technical staff. The next step was the independent construction of the first Chinese aircraft carrier type 002 Shandong. This is an enlarged and deeply modernized version of the old Soviet project. The air group has grown compared to Liaoning, but takeoff is still carried out using a springboard. The Chinese comrades did not stop there and recently launched their second aircraft carrier, completely domestically built.

The aircraft carrier type 003 "Fujian" is a significant breakthrough when compared with its predecessors. The total displacement already reaches 80 tons, and the air group has also increased along with it. At least 40 fighters can be safely placed on the deck, not counting helicopters, AWACS and transport aircraft. Takeoff, unlike the "Shandong" with its springboard, will be carried out with the help of three electromagnetic catapults, which is necessary for heavy aircraft. However, the Fujian power plant is still conventional. Nuclear will be the next, the third Chinese aircraft carrier, which should be equal in capabilities to American competitors.

What do we see? The Celestial Empire did not immediately get in touch with the analogue of "Nimitz" or "Gerald Ford" and went along the evolutionary path, stuffing bumps, gradually eliminating errors and shortcomings along the way. The same is true for India, which has finally produced its first nationally built light aircraft carrier Vikrant. Only after that, New Delhi is ready to take on its second, already heavy aircraft carrier with a displacement of 65 tons, equipped with electromagnetic catapults, the Vishal.

Logic and common sense suggest that Russia, which has long lost many shipbuilding competencies, should not go its own “special path”, but rather apply someone else's experience. Instead of immediately grabbing an updated version of the nuclear catapult "Ulyanovsk", for which there is not even a carrier-based AWACS aircraft, it is advisable to be the first in the series to build an enlarged copy of the Indian "Vikrant" with a displacement of 40-45 thousand tons, a take-off springboard and a conventional power plant. The second aircraft-carrying ship in the series should grow to 55-60 thousand tons and receive an electromagnetic catapult. By the time it is launched, a carrier-based AWACS aircraft may already appear. The third and fourth aircraft carriers in the series should increase to the required 75-80 thousand tons of displacement, receive a full-fledged air wing and a nuclear power plant, which will allow the Russian AUG to operate in the oceans.

The evolutionary path of development, in contrast to the "special" one, can give a guaranteed result with the most rational use of limited resources.
Reporterin Yandex News
Reporterin Yandex Zen
39 comments
Information
Dear reader, to leave comments on the publication, you must sign in.