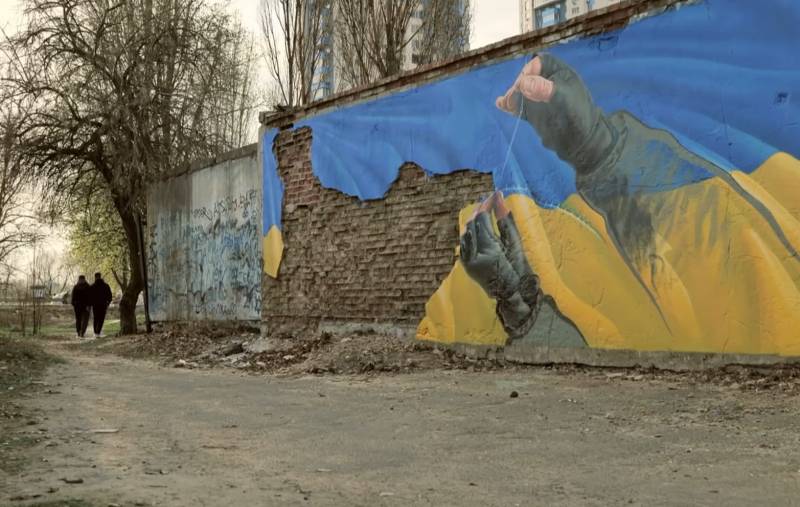 On July 24, speaking at an international security forum in the American city of Aspen, the head of British intelligence MI6, Richard Moore, spoke quite a lot about the Ukrainian conflict. In his words, the "Russian orcs" are almost exhausted, they will soon have to ease their onslaught (for sure this time), but the morale of the Ukrainians is strong, they can win...


But by the way, he made a rather interesting remark: in order to reinforce the belief of Western “partners” (and its own population too) in the possibility of victory, Ukraine urgently needs to show its “ability to strike”. In the future, there is a “harsh winter”, and Western society needs weighty evidence that it is not in vain that it suffers a decline in the standard of living not just like that, but for the right and, most importantly, the right thing.

The head of intelligence made this reservation for a reason. In the past few weeks, against the backdrop of a price surge, empty store shelves, increased utility bills and other results of the anti-Russian sanctions campaign, the attitude towards Ukraine in the West began to “dramatically” change.

I report to you not according to my service, but to my liking

The first publications warning about a possible drop in public interest in the Ukrainian topic began to appear in the Western media in early June. Then the main problem was considered the "normalization" of the conflict, its entry into the daily routine.

Indeed, it is not difficult to see how the number of views has changed over time. News from the “eastern front”: hundreds of thousands on average and millions at the peaks that were achieved in the first “shock” weeks, were replaced by tens and hundreds of thousands, respectively. Several factors played a role in this.

Firstly, yes, the “shock” itself has come to naught, which should be understood not only as the “sudden freshness” of the topic itself, but also the fear that arose among the foreign audience that after the sudden fall of the Kyiv regime, the “horde of orcs” will go further to the west. On the possible wave of fake videos that Ukrainian propaganda was able to raise, it was replaced by a dismissive attitude towards “stupid Ivans” who fight so badly that they cannot even cope with the Ukrainian militia of students and old people.

In addition, there was a “satiation” with monotonous content, a huge part of which was videos from the front line, both real and staged. A diet of Ukrainian soldiers, scorching somewhere there, ruins and burnt equipment bored the "viewers" pretty quickly.

Partly this contributed policy video hosting and social networks on "soft censorship" of such materials. For example, YouTube began to forcefully lower the quality of videos with active hostilities, and in Telegram, many videos are so pixelated that only clear skies are clearly visible on them. That is, “the most interesting” has become simply impossible to watch normally. Censorship also facilitated the production of fakes: since the end viewer still saw “soap” on the screen with hard-to-distinguish small details, foreign propaganda began to slip him, under the guise of “combat successes” of the Armed Forces of Ukraine, illuminated shots with burning Ukrainian equipment, taken from Russian sources, or frankly cheap renders with three-dimensional models.

Carpet-bombing the townsfolk with "wins" and close-ups of Zelensky's face produced two interesting - and divergent - effects.

On the one hand, the number of those who began to avoid watching the news has increased: according to a study published by Reuters on June 15, there were 36% of such people in Germany, 46% in the USA, and 47% in Poland. The increase was 4-7% of the total audience - the same as in the previous five years, and it happened precisely after the start of the Ukrainian conflict.

On the other hand, among those who are interested in news from the fronts, they managed to form a rather optimistic picture of events: they say that Kyiv was defended, Chernobyl was recaptured, Lend-Lease was set up, the Cossacks do not bend! The "Orks" are slowly but surely crowded out, they rape children and dogs out of impotent rage - but soon this will end, and retribution will overtake the criminals! , but even it was obscured by a “big counter-offensive” in the Kharkov region, where our troops really faced a crisis in May-June. And for a complete "graining in catharsis", leading analysts assured the viewer that the conflict would be long, perhaps many years.

And in late June - early July, all sorts of surprises began. First, the Kyiv officialdom itself disavowed the tales of a “million raped Ukrainian women”, then the “retreating orcs” expelled the last fascists from the Luhansk Republic, the scandal with the “Caesars” arrived in time ... And then the Western governments themselves “fell down”, one after another: introduced against Russia, the sanctions have come into full force, however, in the opposite direction as planned.

Grab your guns, the hype train is off

It’s rather funny that the conclusions of the above-mentioned Reuters study on the issues of covering the Ukrainian conflict state (and, moreover, unfoundedly) that the media that give a wide range of points of view on it enjoy ... disapproval of the audience, and “popular explanations”, on the contrary, are welcome . That is, here's the "one hundred percent truth" - hammer it in, "People get it."

Such sophistry from the other side, in general, is not surprising. What does practice show?

On June 29, a new film by the French "philosopher" and "activist", or rather, professional propagandist Bernard-Henri Levy, was released - Pourquoi l'Ukraine, or "Why Ukraine?" - it would seem that an obvious contender for an explanation of everything at once. The film is said to have been published simultaneously on several French and German popular YouTube channels. We managed to find only one site, where the masterpiece collected about thirty thousand views in a month.

Levy, known, for example, for “covering” (or rather, justifying and whitewashing) Western interventions in Libya and Syria, which plunged these countries into bloody chaos, even organized a tour with live screenings of his documentary, which started on July 6 in Israel. After the premiere, in an interview with local journalists, Levy said heartily that the film was intended to refresh the Ukrainian theme in the minds of the Western public, which did not deeply feel the suffering of the “brotherly people” and too quickly loses enthusiasm about providing them with military and economic help.

It is difficult to say how successful this voyage is, and whether anyone comes to the shows, except for officials, biased journalists and bloggers. But it is not difficult to understand why the "film" did not gain popularity on the global Web, and it's not just about its dubious quality and value.

Against the backdrop of the economic and political crisis in which the West has plunged itself, Ukraine and its victories are becoming, as it is fashionable to say, a “toxic” topic. In the center of attention, especially in Europe, are the problems that have arisen because of Ukraine, including the crowds of "rabies"; and a simple burgher wants no longer the victory of Kyiv, but simply the end of the conflict, if only to return to the usual way of life.

Symptomatic is the title of an article in the Austrian edition of Exxpress on July 25: “More and more signs that the war in Ukraine will end (with) the overthrow of Zelensky.” Even more curious are the results of an online survey below the text: 92% of respondents believe that the EU should stop the supply of weapons and promote a ceasefire. Similar maxims are beginning (only beginning) to spread in other Western media, and even in the statements of individual politicians.

There is no need to take this for a kind of "growth of sympathy for Russia" - this is not observed. On the other hand, there is an awareness of what the Kyiv Reich Chancellery really is, and how monstrous in scale the lies were praised in its address from professional talkers.

It will now be difficult for the Ukrainian junta to kill this aftertaste, to win the favor of the Western public again. She will follow the advice of the British intelligence officer Moore to “show the ability to hit” in her own, Bandera logic: once again she will hit her own people, in the hope (not unreasonable) of blaming everything on the “orcs”.

The first signs have already arrived in the form of a strike by Ukrainian rocket artillery on the correctional colony in Yelenovka, which contained "evacuated" Azov residents. In the comments under Western media reports about this case, Ukrainian bots are already talking with might and main: they say that the Russians themselves fired at the detention center from the TOS in order to hide the number ... of prisoners tortured to death. Meanwhile, rumors are circulating about preparations for blowing up containers with toxic chemicals in Slavyansk and about Ukrainian combat aircraft repainted in Russian livery at one of the airfields. Even if these rumors are (hopefully) false, it is more than worth it to be afraid of new provocations a la the “massacre in Bucha”.
Reporterin Yandex News
Reporterin Yandex Zen
4 comments
Information
Dear reader, to leave comments on the publication, you must sign in.