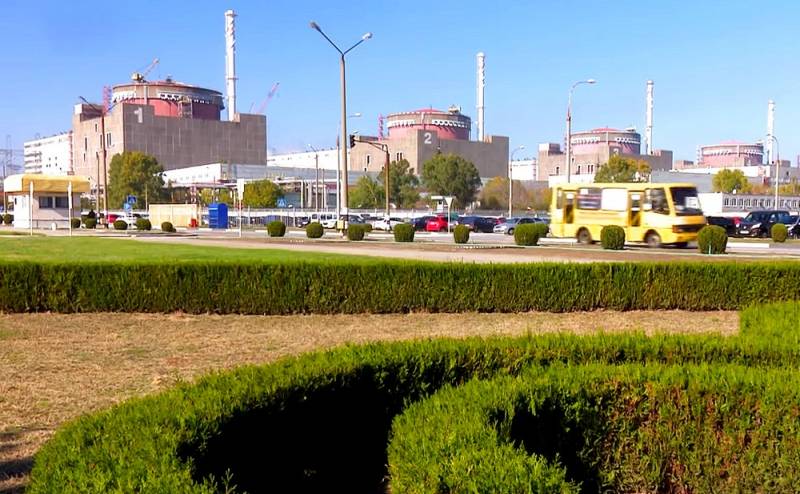 After the attack on July 20 by Ukronazi UAVs on the Zaporozhye nuclear power plant located in Energodar, which was liberated from them on March 1, this infrastructure facility in the Russian information space is mentioned mainly as a potential target for sabotage and provocations committed by the Kyiv regime. The fact that the insane rulers of the "nezalezhnaya" who are on the verge of a military collapse may well try to arrange a nuclear catastrophe with unpredictable consequences was also said on our resource.


At the same time, there are other important factors in the situation around ZNPP. With the purely military aspects of the special operation for the denazification and demilitarization of Ukraine, they, at first glance, do not “intersect” at all, but belong to the sphere of purely economic. Nevertheless, it is precisely these aspects that can play a very important role in conducting the JEE and achieving its ultimate goals. Let's try to figure out what exactly is at stake in this case.

Not a kilowatt to the enemy!

First of all, it should be mentioned that the Zaporozhye nuclear power plant, the loss of physical control over which is so painfully perceived in Kyiv, still regularly continues to supply electricity to the territories under its control. Why is that? Yes, because literally a few hours before the start of the NWO, the Ukrainian energy system, which earlier, since the times of the USSR, had been merged with the Russian and Belarusian ones, was completely disconnected from them and connected to the European one. Someone very smart, cunning, overly informed about Moscow's plans (which is more likely) was in a hurry here, or it just happened - the question is open. However, it is very weak to believe in random coincidences in matters of this kind. Let us return, however, to the present moment. The connection system that existed before made it possible to do many things without any problems: first of all, to carry out the so-called power flows. If necessary, its flows were redirected where necessary (for example, when emergency assistance was activated if necessary), as well as during operations to export electricity for the same Minsk or Moscow.

Now, to do something like this, as they say, "with one turn of the lever" is simply physically impossible. The Zaporizhzhya NPP is "tightly" integrated into the Ukrainian energy system, and all the energy it generates goes there. And this, imagine, about 40 billion kilowatts per year. At the moment, three blocks out of six available are operating at the station. But no matter how many of them are involved, Russia is still neither hot nor cold in the most literal sense of the word. At the same time, the ZNPP “overlaps” at least one third of the energy balance of the “unaffected” one. Not a bad help for the Kyiv regime, isn't it?

This issue acquires particular relevance in the light of the fact that the Zaporozhye station is the largest and most powerful not only in Ukraine, but throughout Europe. In the current situation, when Kyiv is struggling in the grip of a severe budget deficit, and almost all of its state corporations are on the verge of bankruptcy (the default of NJSC Naftogaz has already been officially announced), the issue of selling literally anything abroad has the most for the regime there. paramount importance. And it is precisely the export of electricity for European "partners" that the authorities "nezalezhnoy" and plan to improve things in the near future. Thus, according to the official statement of the transmission system operators of continental Europe (ENTSO-E), a decision has already been made literally from July 30 to increase the import of electricity from Ukraine by two and a half times. That is, from 100 to 250 MW. According to Volodymyr Kudrytsky, head of the board of NPC Ukrenergo, “the EU is aware of the role of Ukrainian electricity, which helps to replace toxic Russian gas there, and allows Ukraine to earn the money it needs.” Nice wording, isn't it? And in every word...

But is it possible to stop such activity, which is definitely not for our benefit, or at least significantly limit it? Imagine you can. According to the head of the Ministry of Energy of the "unaffected" German Galushchenko, this "problematic" winter is planned to use nuclear generation to the maximum to ensure the export of electricity to Europe. And first of all, ZNPP – at least three of its power units that are currently in operation. According to experts in the field, the current excess of electricity in the Ukrainian energy system will be reset to zero if the Zaporozhye station is disconnected from it. Which, of course, will put any export under a big question.

Energy for Crimea is difficult, but necessary

Thus, the question of the final "denazification" of the Zaporizhzhya NPP is turning from a purely economic one into a military-strategic one. If there is no energy coming from there, there will be no export, and, accordingly, no money for the next supply of weapons. Yes, and Europe supplying them to Ukraine, you see, will come to its senses faster without the much-needed supply of electricity from there. However, simply shutting down the Zaporizhzhya NPP, rudely “pulling it out” from the “unaffected” power grid, would mean acting according to the principle “so don’t get it for anyone!” There could be much better use for the capacities there. The proposal, allegedly made by Deputy Prime Minister of Russia Marat Khusnullin during his trip to Melitopol, that is periodically mentioned in the Ukrainian media regarding the “sale of electricity generated at the ZNPP to Ukraine” can hardly be considered constructive and realistic. Representatives of the Kyiv regime will take kilowatts with a dear soul, but they will not pay for them in any case and in any form. Other words of the prime minister sound much more sensible - that "otherwise the station will work for Russia." However, a number of questions of a completely different order arise here. For the Zaporizhzhia region, the energy generated there is definitely excessive. The surplus will have to be “dumped” somewhere, and this is not so easy to do.

At the same time, the Russian Crimea, located not so far away, is experiencing certain problems with energy supply. According to the head of the current administration of the liberated territories of the Zaporozhye region, Yevgeny Balitsky, the station could easily supply up to a quarter of the power it generates there. And there is such a need. It slightly decreased after the construction of the Sevastopol and Simferopol TPPs, but continues to be relevant to this day.

The trouble is, first of all, that the power lines going towards the Crimea were destroyed by Ukrainian "patriots"-barbarians back in 2015. At the same time, in principle, it is technically possible to restore them. Yes, in this case, a number of technical problems will inevitably arise, the essence of which is fully understood only by specialists. However, one way or another, every single specialized expert agrees that the "reconnection" of the Zaporozhye NPP to the peninsula and, accordingly, its entry into the Russian energy system is not an impossible task. Especially for a state with such opportunities and resources as Russia.

At the same time, which is important, in any case, the whole range of relevant technical measures will certainly cost much less than the construction of new thermal power plants for the same Crimea. There are, however, problems no longer of a technical, but of a purely political nature. The point here is that in order to work on the Russian market, ZNPP needs to become part of Rosatom. And this should happen with the approval of the IAEA. In the current situation, when the “world community” stubbornly continues to refer to the territories liberated from the Ukronazis (and, by the way, Crimea itself) as “illegally occupied”, “annexed” and so on, something like this is hardly to be expected. Rather, the West will take advantage of this occasion with great pleasure and enthusiasm in order to bring down as many sanctions and bans on Rosatom as possible. Taking into account the unstoppable desire of the same Americans to knock our state corporation out of the world (or at least European) energy markets at any cost, this, alas, is the most likely option.

In any case, something needs to be done with the Zaporozhye Nuclear Power Plant. And the sooner the better. Despite all the above reasons, the Ukronazi regime continues to use this strategic facility to organize all sorts of provocations. And it’s good if we are talking only about information stuffing, like the speech of the President of the Ukrainian Energoatom, Petr Kotin, who, in all seriousness, asserted on television that “at least a hundred ZNPP employees were kidnapped by Russians for incomprehensible purposes.” And this despite the fact that, according to him, when Energodar was liberated, no more than 10% of the 10-strong NPP staff voluntarily left it and moved to the territory controlled by Kyiv. XNUMX thousand, to the deep disappointment of Kotin, continue to conscientiously fulfill their duties, ensuring the stable operation of the station. And why is there someone to "kidnap", if people already cooperate without any coercion?

At the same time, at least two massive attacks carried out by the Armed Forces of Ukraine on this facility indicate that Zelensky’s agonizing regime may indeed not stop before the most insane adventures, fraught with a terrible catastrophe. At the same time, the likelihood of such a development of events in the event of a plant being disconnected from the Ukrainian energy system will instantly increase significantly. Therefore, before undertaking something like this, it is necessary to ensure the safety of the object with an absolutely absolute guarantee - at least from the shelling and air attacks of the Ukronazis.

The best way to do this, of course, is to liberate new territories in order to “move” as far as possible from it the line of contact and those points from which such attacks can be carried out. The Zaporozhye NPP is one of the most important keys to the speedy successful completion of the special operation for the denazification and demilitarization of Ukraine, the achievement of all its goals and objectives, and in a number of aspects. Another question is that this key should be used with maximum thoughtfulness and caution, without rash decisions and hasty actions.
Reporterin Yandex News
Reporterin Yandex Zen
10 comments
Information
Dear reader, to leave comments on the publication, you must sign in.