How Russia, the US and China will share the orbit of the Earth and the Moon 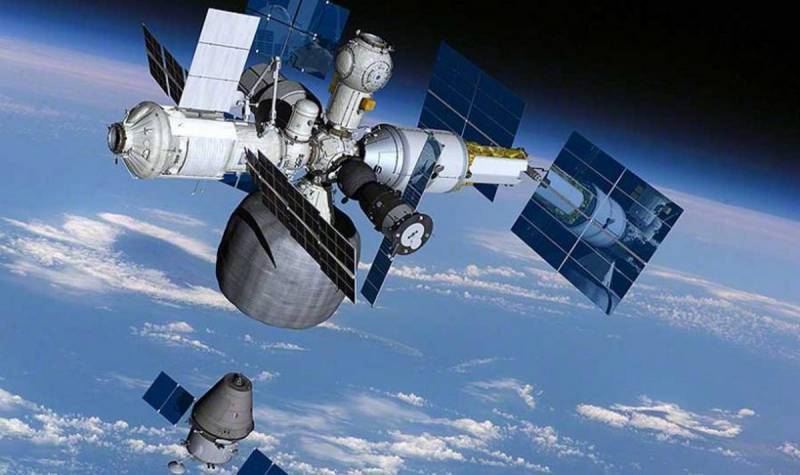 The complete rupture of all ties between Russia and the countries of the collective West put an end to its participation in the ISS project. The alienation line will now pass not only on Earth, but also in space. It is already possible to predict how two blocs, led by the United States on the one hand, Russia and China on the other, will divide the near-Earth orbit and the Moon.

The fact that Russia can stop its participation in the International Space Station project after 2024 has been said for a long time. Claimed reasons previously worn purely technical nature, as explained by the head of RSC Energia Vladimir Solovyov:

Until 2025, Russia has obligations to participate in the International Space Station program. After 2025, we predict an avalanche-like failure of numerous elements on board the ISS.
Indeed, the station has been in orbit since 1998, it has its resource, and it is close to exhaustion. From a certain point on, maintaining the technical serviceability of the ISS may become impractical. As an alternative, Roscosmos offered to create its own Russian Orbital Service Station (ROSS), but that was back in the glorious pre-war days. The current head of the state corporation, Yuri Borisov, who replaced Dmitry Rogozin at this post, the day before, during a conversation with Russian President Putin, said that after 2024 the ISS is “everything”:

Vladimir Vladimirovich, you know that we are working within the framework of international cooperation on the International Space Station. Of course, we will fulfill all our obligations to our partners, but the decision to leave this station after 2024 has been made. I think that by this time we will begin to form the Russian Orbital Station.
The Chinese edition of the Global Times commented explicitly on this political solution as follows:

Recent events suggest that Russia has come to a point where it is fed up with the humiliation and sanctions of the United States, including the previous military operation in Ukraine, as a result of which Moscow no longer wants any cooperation with Washington.
Very similar to the truth. Apparently, Roskosmos will indeed fulfill all its obligations to partners and after 2024 will begin a real process of curtailing international cooperation. It may take more than one year, everything will depend on how soon our ROSS will actually be formed. The ISS itself will remain in orbit until at least 2030. In any case, the readiness to support it throughout this period was announced in the United States.

What is the Russian Orbital Service Station?

Conceptually, it is close to the Soviet "Mir" and will consist of 3-7 modules. The design of five modules seems to be optimal - the basic, target production, material support module (warehouse), platform module (stay) for assembling, launching, receiving and servicing spacecraft, commercial - to accommodate four tourists - with two large windows and access to WiFi. The crew of the Russian station will consist of 4-6 people. ROSS will become visited, and this is its most important feature.

The nuance is that our station will be in a very unusual orbit, at high latitudes, where the level of radiation is very high. This explains its status as visited. Why is this done, because such a solution is not very profitable commercially?

The fact is that the location of the ROSS in the subpolar regions at an altitude of 300-350 kilometers and with an angle of inclination to the equator of 97 ° (for comparison: the ISS and Mir have about 52 °) will allow viewing not only the Arctic and the Northern Sea Route, as stated, but also the territory of a potential enemy to a great depth. In this respect, the Russian station is close to the Soviet Kosmos-1870, which once looked after the US and Canada.

In other words, ROSS is not only a scientific, but primarily a military project of exceptional importance in geopolitical realities.

As an alternative to the ISS, the United States is actively promoting the Lunar Orbital Platform-Gateway (LOP-G), also known as the Deep Space Gateway. This is the American gateway to the Moon itself, Mars and deep space. The station, like ROSS, will be visited. Manned flights to it using Space Launch System launch vehicles must take place at least once a year. The project also involves the countries of the European Union, Canada and Japan.

Russia's participation in it was considered, but its contribution was assumed to be so small and in third roles under the auspices of the United States that Roscosmos chose to voluntarily withdraw from it. In fact, the Deep Space Gateway is precisely an American project where everyone dances to the tune of NASA.

As an alternative to this overtly patronizing approach, Russia and China have agreed to jointly establish the first International Scientific Lunar Station. The CNLS will most likely be located not in orbit, but on the surface of an earth satellite and will also be visited. In the absence of people, the station must be controlled and maintained by robots. Construction is scheduled for 2031-2035. The legal and technical base is currently being prepared. On April 24, 2022, the Intergovernmental Agreement on Cooperation and the Creation of the International Scientific Lunar Station was signed.

It should be noted that both Beijing and Moscow emphasize the openness of this project to all comers, as well as the equal status of all its participants. This is very correct, since the exploration of the moon is an extremely difficult task, which is almost impossible for any country to carry out on its own. However, for political reasons, the European Space Agency, which considered the possibility of participating in the MNLS, is unlikely to take advantage of it.
Nevertheless, the International Lunar Scientific Station is an exceptionally promising project, an excellent alternative to the obsolete ISS and the pro-American Deep Space Gateway.

It is likely that in the future the countries of the BRICS+ association, which is gaining geopolitical weight, will want to participate in the MNLS. This will be a serious counterbalance to the Western bloc led by the United States in space.
Reporterin Yandex News
Reporterin Yandex Zen
6 comments
Information
Dear reader, to leave comments on the publication, you must sign in.