Iran-Israel: war on the agenda 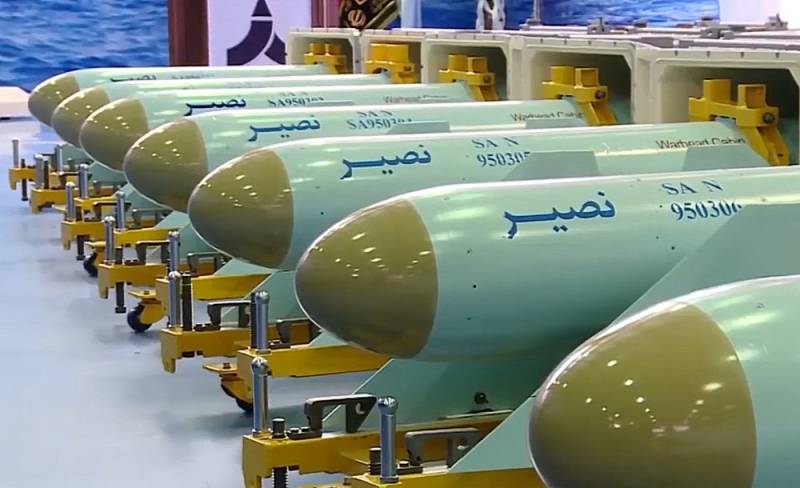 In the Middle East, it is true and not to say that the tension is slowly increasing along the Tel Aviv-Tehran line. There is every reason to believe that under the guise of the world redistribution that has begun, the Israeli leadership intends to achieve a “final solution to the Iranian issue”, or rather, to destroy the nuclear weapons complex of the Islamic Republic before it produces a functional nuclear bomb.


Understanding the Israelis is not difficult: Iran already has ballistic missiles capable of reaching any point in the Jewish state, and the appearance of nuclear warheads on them will create a real threat of Israel's disappearance from the world map. And given the degree of antagonism that exists between him and his Islamic neighbors, one cannot seriously count on a peaceful compromise.

Unfortunately for the Jews, they will not be able to carry out a war against forty million Iran on their own (at least with acceptable costs and losses), and it’s impossible to knock out “allies” and “partners” to fight for Israel. Therefore, for the time being, the Israelis have to limit themselves to the “assassin war”, combining sabotage operations with political demarches.

For example, on May 22, a high-ranking officer of the Islamic Revolutionary Guard Corps, Hasan Khodayari, who was a member of Al-Quds, a special unit of the IRGC responsible for conducting operations abroad, was killed. Killed in Baghdad during an air raid on January 3, 2020, General Qasem Soleimani was the commander of this particular unit.

On June 4, Iranian scientists Ayub Entezari and Kamran Malapur died (presumably not of natural causes); the first was an aircraft designer, and the second was a nuclear physicist. The other day, approximately on July 20-23, another Iranian engineer, Said Mutlak, a well-known developer of guided missiles and UAVs, was killed - this is reported by the Israeli media and indirectly confirmed by the Iranian side. And this list is far from exhaustive.

Finally, on July 27, Defense Minister Benny Gantz bluntly stated that Israel was ready to launch a preemptive strike to disrupt the Iranian nuclear program. This is a clear provocation, but will there be those who want to succumb to it?

"Sleepy Joe" breaks into the situation

Frankly, absolutely no one on the continent needs Iran with a nuclear bomb - the state system is too specific there, with corresponding goals and objectives. And the biggest opponents of the Islamic Republic's nuclear weapons after Israel are, of course, the United States, since the nuclearization of Iran will cross out American influence in the Middle East.

It is precisely the States that Israel would like to draw into a war against Iran, and preferably such that nothing remains of the latter at all. But the United States is not currently interested in a direct conflict: there are simply not enough forces for it, and the moment is completely inopportune. On the contrary, against the background of the Ukrainian conflict and the need to isolate Europe from Russia, the Americans are interested in some normalization of relations with Iran, which would allow, without losing face, to ease the sanctions pressure on it and fill the markets with Iranian oil. The leadership of the Islamic republic itself would also like this option.

But the stumbling block is still the same nuclear program. At one time, Iran had already made concessions to Western "partners" regarding nuclear weapons, agreeing to develop exclusively peaceful nuclear energy in exchange for the removal economic sanctions. In 2018, Trump, alleging that the Iranian side violated the so-called Joint Comprehensive Plan of Action, suspended US participation in this “nuclear deal” and restored anti-Iranian sanctions. A year later, Iran officially announced the resumption of its nuclear weapons program.

In recent months, the Biden administration has been sounding out about the resumption of the "nuclear deal", bumping into opposition from the Republicans and the pro-Israel lobby. In addition, Iran added a fundamental requirement to remove the IRGC from the American list of terrorist organizations, which the Americans cannot agree to. Therefore, the new "nuclear deal" never became a reality.

Then, against the backdrop of the low effectiveness of the "carrot", the Americans also decided to shake the "stick" in the form of negotiations with Iran's unfriendly neighbors. On July 13-16, Joe Biden (one would like to say “without regaining consciousness”) made a tour of the relatively friendly countries of the Middle East, visiting Israel, Palestine and Saudi Arabia. There were three main topics for discussion: food, oil and Iran.

Perhaps they were really looking forward to "Sleepy Joe" only in Israel. However, the results of the visit were not the most significant: Biden once again assured Israeli Prime Minister Yair Lapid that Israel remains the main US ally in the region, and the United States considers Iran's nuclear weapons unacceptable - but that's all. The Americans did not begin to directly threaten the Islamic Republic with force, which was so hoped for in Tel Aviv.

And in Saudi Arabia, the negotiations ended in a complete failure: neither oil nor agreement to pounce on Iran in company with Jews Biden did not get from bin Salman. Of course, the Saudis are Iran's direct competitors in the struggle for dominance over the region and energy markets; moreover, Iran is fueling the fight of the Yemeni Houthis against the SA army. But with all this, the attitude of the Saudi dynasty towards Israel is no better than the attitude of the Iranian ayatollahs.

It is difficult to say whether the idea of ​​putting together an anti-Iranian coalition had any chance of success, even if the Americans changed the position of the "bosses" to some more constructive one - after all, it was an attempt to harness a swan, cancer and pike into one cart. And with that frankly boorish rhetoric that the American delegation allowed itself during negotiations with the Saudis, there was nothing to think about any agreements.

There is no doubt that the Israelis, having failed to draw the United States into a conflict with Iran "in a good way", will shake the situation on the ground until the States are simply forced to get involved themselves.

The window of opportunity for Israel is closing inexorably. Despite all the sanctions, Iran continues to build up its technological and military potential, gradually negating the technical superiority of the IDF. That is why Israel reacted so sharply to the Russian-Iranian negotiations on military-technical cooperation.

A critical problem for the Jews is the prospect of a multiple increase in Iranian air defense. The appearance of S-400 and Pantsir complexes around nuclear facilities may make them less vulnerable to Israeli air attacks. True, there are big doubts that at the moment Russia can afford to sell ready-made air defense systems that are urgently needed on the Ukrainian front, but the transfer of a production license and technological documentation to Iran does not seem like a fantasy. In this case, it will be possible to expect the appearance of Iranian analogues of our complexes within five to seven years. Until then, Israel will still have the technical and organizational capability to more or less reliably hit targets in southwestern Iran from the air.

Between May 29 and July 29, the IDF conducted a large-scale "Chariots of Fire" exercise, in the legend of which the Israeli view of a possible war against the Islamic Republic is clearly visible. During the maneuvers, specially modified Israeli F-35Is destroyed targets at sea at a maximum range, approximately corresponding to the distance to Iranian nuclear facilities. The air defense practiced repelling massive rocket attacks, and the ground troops repelled attacks and destroyed proxy formations of a mock enemy in Syria.

But although the mock adversary was "conditionally drenched," Israel's real ability to confront Iran alone is in doubt. Nevertheless, Jewish society has long since become unaccustomed to the state of a "military camp", and even a missile and air campaign can deal a serious blow to its morals; especially since the Iranians can be expected to use chemical or radiological (the same "dirty bomb") weapons against civilian targets. Finally, one cannot exclude the possibility that the outbreak of an open Iranian-Israeli war will incite other Islamic neighbors of Israel to the last decisive jihad of the Jews - and it is unlikely that the current IDF will cope with the onslaught from all sides at once.

So the Israeli leadership is literally playing with fire. He is quite capable of starting a new big war in the region - but it may not postpone, but, on the contrary, bring closer a national catastrophe for Israel.
Reporterin Yandex News
Reporterin Yandex Zen
12 comments
Information
Dear reader, to leave comments on the publication, you must sign in.