Iranian "Shaheeds" may appear in service with the LDNR 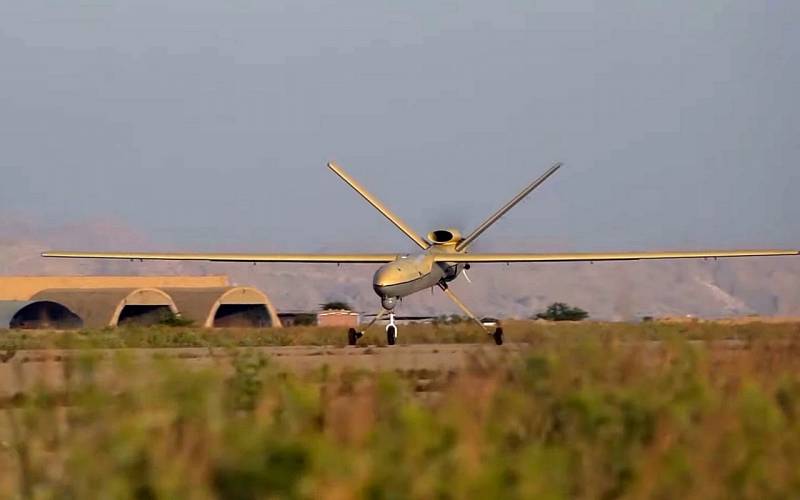 One of the most "hype" topics of the last few days is the possibility of Russia acquiring a batch of reconnaissance and strike drones from Iran. The Western media were the first to report this, and then the domestic media picked up and reprinted it. However, neither Moscow nor Tehran confirm this deal. Should we really expect the appearance of Iranian Shahed-129 UAVs (“Shahid-129”) in service with the RF Armed Forces?


The first that the Russian militarypolitical the leadership is interested in acquiring Iranian drones, US national security adviser Jake Sullivan told CNN:

We have information that the Iranian government is preparing to provide Russia with several hundred UAVs, including Shahed-129 attack drones. Subsequently, they may end up with the separatists of Donbass.
The source, let's face it, is a very high-ranking one, this is not “one grandmother told the agency” to you. But do not forget that the entire collective West is now waging an active information war against Russia, so you should not recklessly believe what they are broadcasting, to put it mildly. However, there is usually no smoke without fire.

The war immediately exposed all the problems of the Russian army and navy, which military experts and retired officers had previously warned about. One of them turned out to be an acute shortage of unmanned aircraft, reconnaissance and reconnaissance-strike, which the enemy has in abundance. The Armed Forces of Ukraine have the ability to conduct aerial reconnaissance and correct fire with the help of UAVs, significantly increasing the effectiveness of their artillery and radically complicating the counter-battery fight against them. Turkish "Bayraktars" burn our armored vehicles with crews, strike at border boats and ships of the Russian Navy. The absence of high-altitude AWACS drones among the allied forces allows the Ukrainian army to almost freely move over considerable distances by the so-called toad jumps.

It got to the point that caring volunteers at their own expense purchase and transfer Chinese-made civilian UAVs to the People's Militia of the LDNR. Yes, of course, unmanned aircraft are not some kind of “wunderwaffe” that can turn the tide at the front, but its presence simplifies a lot, and its absence complicates and leads to an increase in losses. The fact that Russia, to put it mildly, was late with the real introduction of UAVs, was recently recognized by the relevant Deputy Prime Minister Yuri Borisov:

I think that we have belatedly engaged in the serious introduction of unmanned vehicles. This is objective. Although the Syrian conflict has pushed us to this.
The war has already been going on for six months, and out of nowhere, their own UAVs will not be taken. We really managed only with the launch of a production line for the medium-altitude Orions, direct competitors of the Bayraktars, on which all hope is now. "Hunter", "Altius-U" and other promising drones will appear only in the future, and you need to fight here and now, reducing unjustified losses among your military. Therefore, the idea to buy a batch of reconnaissance and strike UAVs from Iran seems to be very sensible.

The fact that the Islamic Republic is one of the world leaders in unmanned aircraft, we detail told previously. It couldn't be otherwise. Iran has been under Western sanctions for decades, while confronting the terrorist policies of Israel and the aggressive policies of the United States. Over the years, several American and Israeli drones have fallen into the hands of the Iranians, on the basis of which they have created their own industry.

The Shahed-129 mentioned by Sullivan is believed to be an unlicensed copy of the American MQ-1 Predator drone and the Israeli Hermes 450. With a wingspan of 16 meters, it is 8 meters long, weighs 400 kg, and has a top speed of 150 km/h. , flight duration - 24 hours, and the radius of combat use - 170 km. The Iranian drone can carry either anti-tank missiles or high-precision glide bombs with fragmentation warheads. Interestingly, the Sadid-1 air-launched anti-tank missile is also an unlicensed copy of the already Israeli Spike-ER. In general, well done Iranians, they are doing the right thing by borrowing the best from their enemies, without bothering with all sorts of licenses. Shahed-129 is a serious reconnaissance and strike drone that would be very useful on the Ukrainian fronts. But will we really see it in service with the RF Armed Forces?

It seems not. On the one hand, Tehran denies the supply of its UAVs to Russia in order to avoid an escalation of the armed conflict in Ukraine. On the other hand, Moscow itself does not even recognize the fact of negotiations with Iran on this topic. American congressman Ted Deutsch gave a very accurate assessment of such a deal, who said:

No one expected that such a great power as Russia would go to Iran for military support, it was a surprise.
Indeed, to go and buy from Tehran a couple of hundred Shahed-129s for the RF Armed Forces means to admit that the preparations for the war with Ukraine and the collective West behind it, which, as we are convinced, have been going on all these 8 years, have failed. This is a question of the image of a great power, no one wants to lose face. It was necessary to buy a license and establish a joint production of UAVs with Iran before the start of hostilities and the introduction of anti-Russian sanctions, which, we recall, proposed even before the start of the special operation, but were not heard. But as always.

If you try to imagine what will happen next, then events can go according to the following scenario. The Russian army fought with "Orlans", "Forposts" and "Orions", so they will continue to fight. The purchase of an experimental batch of Shahed-129 is still possible, but not for the Armed Forces of the Russian Federation, but for the People's Militia of the LDNR. It is there that things are worst with unmanned aircraft, the Armed Forces of Ukraine with their reconnaissance UAVs outright outplay the "policemen" in the counter-battery fight. The appearance of Shahed-129 can really change a lot on the battlefield for the better. Iranian drones will be able to stay in the air for a long time, tracking all the movements of the Ukrainian army, identifying enemy firing points and issuing data for target designation of DPR and LPR artillery. This is especially important for cleaning up the suburbs of Donetsk - Avdiivka, Pesok and Maryinka. Also, Shahed-129 could play an important role in the liberation of the Slavic-Kramatorsk agglomeration.

If the experience is recognized as successful, then it will be possible to talk about buying a license for the production and modernization of Iranian UAVs in Russia. But according to the mind, this should have been done before the start of the war, and not six months later.
Reporterin Yandex News
Reporterin Yandex Zen
8 comments
Information
Dear reader, to leave comments on the publication, you must sign in.