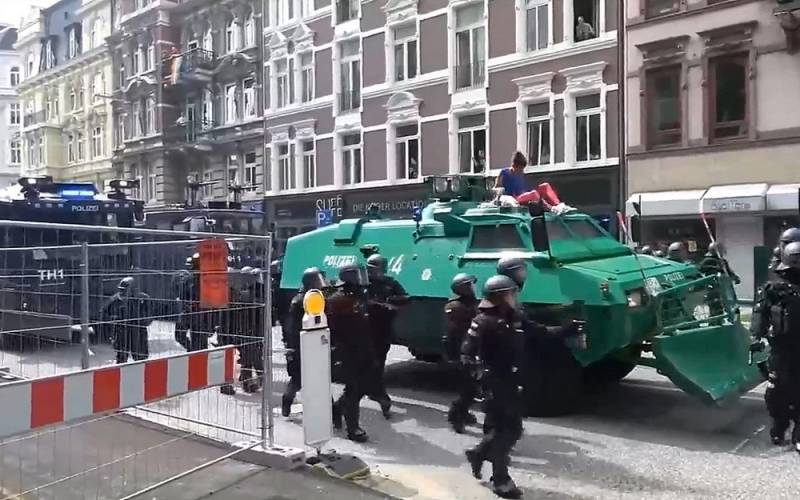 As they said in one popular television series, winter is coming, and by all indications, it will be cold and hungry, both literally and figuratively. This fact causes a real panic in the European national and transnational administrations - of course, because its own leaders brought the EU to life like this with their ill-conceived sanctions campaign against Russia.


Or, on the contrary, too well thought out, but directed, among other things, against the European Union itself. Simple burghers and big business have every reason to suspect the current leaders of their states of pro-American compradorism, and such accusations are already being voiced aloud.

One way or another, even in the event of the immediate lifting of all anti-Russian sanctions, trade flows that are in a state of restructuring will not return to their former channels at once, which means that economic the position of the EU for the remaining two or three warm months will not come out in any way. Yes, no one is going to strengthen it - instead, the European Commission and the governments of Western European countries are preparing to crush popular discontent with force.

It is characteristic that repressive measures are being prepared not only against street demonstrators, whose crowds are already flooded cities and roads, but also against entire states in case they begin to deviate from the "general line of the party."

The most painful problem of the European Union remains gas - or rather, the fact that almost no gas remains, at least in the supply pipes.

The Siemens traveling turbine is still in some kind of limbo, various sources vying with each other give out mutually exclusive versions about its status at the moment: either the German side did not hand over its documentation to Gazprom, or it did not accept it. Physically, the unit is still in Germany, and not to say that the Germans are very happy about this. Before they had time to rejoice at the fact that Nord Stream 1 was launched after a planned suspension, the nominal overhaul run of another turbine ended, and it was put into reserve - with a corresponding decrease in pumping. Naturally, this caused a real hysteria among European consumers.

Against the backdrop of these troubles, the head of the European Commission, Ursula von der Leyen, struggled to push through a directive on the centralized distribution of available gas reserves within the EU. Behind the words that everyone will have to save and from time to time share with those who will have a shortage, there was clearly an intention to squeeze gas from the southern European countries in favor of Germany. Moreover, the essence of the intentions was not to save the Germans from freezing at the expense of the southerners, but to delay the stoppage of German industry, especially chemical industry, at the expense of the common population.

Since this was clear to absolutely everyone, von der Leyen tried to push her initiative around the European Parliament, where she had every chance of stumbling upon someone's veto. The representatives of Spain and Portugal explicitly stated that they were not going to sacrifice anything in favor of the Germans. As a result, von der Leyen's idea went into the trash, and a "leaky" savings program was adopted with many exceptions.

The problem of the national veto, in turn, is of great concern to German Chancellor Scholz. Recently, he proposed to eliminate this very right of veto in voting on all-European issues, as individual countries abuse it, for some "selfish" motives, delaying the adoption of decisions that are important for everyone.

Of course, there was a transparent hint at Hungary, which consistently resisted the adoption of anti-Russian sanctions packages, but disagreement with the current course is already openly expressed not only by oppositionists, but even by some heads of regions throughout Europe. In the near future, the question may arise of forcing such "freethinkers" to cohabit, and here, of course, any confusion and deviationism becomes completely unacceptable.

In general, on the eve of difficult times and in the face of the threat of growing centrifugal tendencies, supranational structures are urgently trying to “consolidate” the participating countries and strengthen the centralization of the EU. So far, this is being done by “decent” methods, and therefore without visible success, but this is for now.

Meanwhile, popular discontent policies The European Union has long been at a high point. The wave caused by two years of anti-epidemic restrictions did not have time to subside, as already from above they began to demand that the very “European standard” of a relatively high standard of living be almost completely abandoned.

Burghers across Europe are worried about fairly mundane things - a long-unseen rise in prices and the threat of mass unemployment, growing inequality between the poorest and richest. And purely European catalysts of discontent, such as pseudoecological and gender schizophrenia, are superimposed on top of them. And if the authorities can at least try to shove the first group of problems onto “dictator Putin” (although this is no longer very successful), then planting “green” and “rainbow” agendas cannot be pinned on him.

The most terrible thing is that the layman has already figured out what the European Union is now - a puppet structure serving the interests of overseas masters, and that he, the layman, is becoming more and more confident in this discovery of his. In other words, in the minds of the burghers, an image of the enemy is formed by itself, which completely coincides with reality.

According to a survey conducted by Bild, in Germany alone, about half of the citizens are already ready to protest in the street if the situation does not begin to stabilize. But the European authorities are not afraid of the crowd itself, but of the fact that someone with great resources will saddle it, arm it and direct it in the right direction. Large European industrialists - the main suicide bombers of the coming winter, if you count in billions of euros - have a wealth of experience in using scabs and raider squads, so the fears of politicians are not unfounded.

One of the areas of preventive work is ... an attack on social networks and instant messengers, which “proven” themselves perfectly during the “color revolutions” (including, by the way, the uprising of the BLM in the States).

The most dangerous of them is, of course, "Putin's" Telegram - it is not yet completely banned, as in freedom-loving Ukraine, but for more than a month now, the pro-government Western media has been campaigning to discredit the messenger and information channels based in it, which are accused of "spreading Russian disinformation". ". The European future of Facebook and Instagram is also in question (both social networks are banned in the Russian Federation), the owner of which is required to store user data in the EU (and, self-evidently, cooperate more closely with local law enforcement agencies).

Another important issue is the “re-export” from Ukraine of generous Western arms donations, including heavy weapons. Europol is trying to cut off supply chains, but reports smuggling is only on the rise. But the same "Panzerfausts" can fall into the hands of not only organized crime groups, but also some "Volksgrenadiers" who will shoot from them at police cars, hiding behind a crowd of townsfolk.

Secretly hoping it won't come to that, European law enforcement agencies are urging citizens to stay away from protests, threatening to track demonstrators with facial recognition software. In case the threats still do not work, the police are replenishing their arsenals of special equipment.

Like this: only the second serious test in a couple of years is ahead, and one of the main strongholds of “democracy” is hastily trying to switch to the regime of a police state, but neither the spirit nor the competencies are enough for this. And winter is getting closer, and, apparently, in Europe it will not only be cold, but also “fun”.
Reporterin Yandex News
Reporterin Yandex Zen
6 comments
Information
Dear reader, to leave comments on the publication, you must sign in.