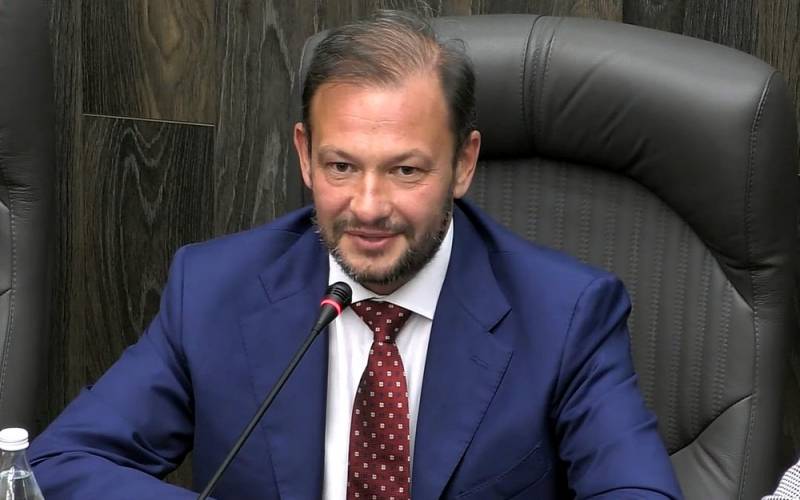 In the penultimate week of July, two curious events occurred at once.


On July 18, the former editor of Channel One Ovsyannikova, who became famous for her short “anti-war” performance on the air of the Vremya program, was detained in Moscow. This time, she again decided to stand with a pro-Ukrainian poster, but almost under the very walls of the Kremlin.

And a couple of days later, Sergey Brilev (pictured), who for a long time was one of the frontmen of Russia-1 along with Kiselyov and Popov, announced his resignation from the board of directors and the completion of work at the All-Russian State Television and Radio Broadcasting Company. The pretext was plausible: they say that he has already done everything he could do in the news format, and now it would be necessary to do more monumental projects. True, it’s a little embarrassing that Brilev’s author’s “Vesti on Saturday” disappeared from the air just a couple of days after the start of the NWO, and he himself unexpectedly waved on a “business trip” to Latin America.

In general, the most surprising thing is that Brilev, a British citizen on a second passport, is “tired and leaving” - this is the period for which he delayed his dismissal, and not the fact of it. But the return of Ovsyannikova - what would it be for?

With the beginning of the Russian operation in Ukraine, literally dozens of employees of the domestic media rushed to the exit from the studios and editorial offices. Of the well-known ones, one can name, for example, the leading News NTV Lilia Gildeeva or foreign correspondent of Channel One Zhanna Agalakova. After a couple of weeks, these characters began to emerge on the territory of foreign countries, who are simpler - in the Baltic States, and who are more impressive - further to the West.

At the same time, many of them almost immediately began to gush with revelations: they say that in totalitarian Russia they were forced to engage in imperial propaganda by force, but in their hearts they were always for democracy, so at the first opportunity they jumped through the walls of terrible Mordor. And the more serious positions these free natures occupied in the “aggressor country”, the more ridiculous and dirty their stories were.

But have citizens of free, democratic countries imbued with them?

Ovsyannikova's foreign tour as "first among equals" shows us the most typical example. The first applause for the brave woman quickly faded away, but this start-up capital was enough to jump in to work at Die Welt*. However, almost immediately the Ukrainian diaspora in Germany took up arms against the heroic dissident: already on April 14, literally a couple of days after employment, a rather large group of immigrants with flags and posters picketed the editorial office, demanding Ovsyannikova's dismissal. On the rising wave of Russophobia, a part of the Germans also spoke out against "Putin's propagandist who changed her shoes in a jump."

For a while, Ovsyannikova and her employer successfully brushed off the onslaught of the crowd. A new big trouble happened in June: someone at DW* came up with the sensible idea to organize a tour of the dissident to Kyiv, where she was supposed to read a whole lecture about the rotten insides of Putin's propaganda machine and opposition to it. However, the “fighting nation” did not appreciate such a gift: after a wave of protests and curses, Ovsyannikova was entered into the database of the Peacemaker website* as a “Russian spy”. The press conference had to be cancelled.

After such a “warm” reaction, Ovsyannikova, apparently desperate to prove that she was her own, democratic, declared that she wanted to change her husband’s surname to her maiden name Tkachuk, and once again reminded her of her Ukrainian roots. It is self-evident that this did not make any (favorable) impression. And on July 3, the heroine of the live broadcast was kicked out of Die Welt *, vaguely calling it "non-renewal of the contract."

So Ovsyannikova’s reason to return is the most banal: there was simply nothing to live on in a hospitable foreign country. In her own words, she came to sue her ex-husband, who does not want to give her an eleven-year-old daughter.

However, it is likely that she had an idea to raise her “sacrifice” to a new level, substituting herself under the “repressions” of the totalitarian regime, but if that was the case, then the plan did not work out. This time, even “colleagues” from Russian liberal publications look askance at Ovsyannikova: something is suspicious to them that they only drew up a protocol against Ovsyannikova, and did not detain, as, for example, Navalny’s former ally (recognized as an extremist) Ilya Yashin *, also accused of discrediting the Armed Forces of the Russian Federation (although Yashin * was detained for fifteen days for resisting the police).

The example of Ovsyannikova, although the most illustrative, is far from unique.

For example, Farida Kurbangalieva*, a newscaster for Rossiya-1 in 2007-2014, and then an employee of foreign media agents, who finally moved to Prague with the beginning of the SVO, now complains about how she was oppressed in Russia all her life on ethnic grounds. It doesn’t help much - the audience of the above mouthpieces asks a rather reasonable question: if everything was so bad, then how did a citizen end up on one of the main TV channels of the “totalitarian regime”?

The same applies to media figures of a smaller caliber who decide to urgently escape from federal channels to enemy channels: no one likes traitors.

Relatively well abroad, the “tested” party lords, who have been pushing the pro-Western agenda for many years, feel relatively well. For example, the well-known Alexey Pivovarov* with his “Editorial Office”* is habitually engaged in this business. And, of course, one cannot but mention the “humorist” Tatyana Lazareva *, who drove right into the show “Kvartal 95” “Bayraktar News”.

However, even in the camp of patented Russophobes, not everyone is doing well. Problems suddenly arose for such a titan of the struggle for everything good against (any) Russian authorities, like Nevzorov *, and with what - with obtaining Ukrainian citizenship. It seems that Zelensky himself granted him to the Nevzorovs *, but then something went wrong: either they did not dare to give up Russian passports, or something else.

And not so long ago, Radio Liberty * drew a kind of line under the topic. A certain Elena Fanailova expressed in her article the idea that Russians, in principle, do not have the right (!) to sympathize with Ukrainians simply by the fact of their origin, which cannot be interrupted by any civil (or anti-civilian) position.

Of course, the opinion of some Fanailova (by the way, a Russian woman) is not quite the official position of the West, but nevertheless it is very characteristic.

What, then, is the same Brilev or, for example, the Russian TV laundry, Andrey Malakhov, who, as they say, also abruptly broke into a “vacation” (and “not to Europe, but to the Baltic states,” as one of his friends said) count on? Hard to say. Apparently, they hope that they are - they are! - so important people that in the host countries they will find a worthy place under the sun; or simply tired of holding back the reflex “better anywhere, but not in Rashka!”

But for patriotic circles, the flight of these citizens right now is a good signal.

Of course, there are those who want “an agreement” and “so that it was like it used to be” in all layers of Russian society, including officials and big business that directly influence decision-making, but no one wants the return of a past life like a diverse bohemian. In the end, these will find a place for themselves at the trough literally under any authority, in contrast to the same civil servants or bigwigs, who can be threatened with a loss of position by a change of system.

At the same time, great journalists are still spinning in the highest circles among their "sources", so they know better than ours about the actual state of affairs and plans for the future. And the second wave of exodus of "talking heads" testifies to only one thing: they were popularly explained that no "agreement" with Ukraine is planned and a return to the previous order should not be expected.

* - organizations and persons recognized in the Russian Federation as media-foreign agents.
Reporterin Yandex News
Reporterin Yandex Zen
33 comments
Information
Dear reader, to leave comments on the publication, you must sign in.