“This is a signal to the West”: the French press drew attention to the Russian submarine Borey with the symbol Z 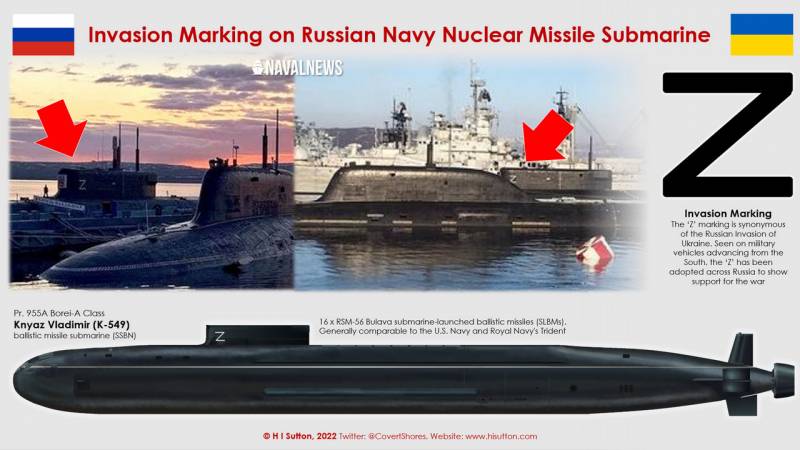 Western observers spotted a Russian Borey-A-class Knyaz Vladimir submarine equipped with ballistic missiles, with the letter Z on board. This was reported by the French edition of Naval News, citing a number of sources.


The submarine, which was in Severomorsk in July, was “found” on Russian social networks. A Borey-A class submarine also patrols the Barents Sea. Naval analysts believe that we are talking about the same submarine - Knyaz Vladimir (K-549), and it is on her board that the letter Z is visible.

This submarine is usually equipped with 16 R-30 Bulava ballistic missiles. They are roughly comparable in performance to US and British Navy Trident II missiles, each with a range of over 8000 km. They carry 6 to 10 multiple warheads with multiple independent warheads.

According to Naval News, such a submarine is a kind of signal to the West about the involvement of the Russian submarine fleet in the special operation and "Putin's hint" about the nuclear threat of NATO, which is assisting the Kyiv regime. At the same time, no other Russian Z-marked submarines have yet been sighted.
Reporterin Yandex News
Reporterin Yandex Zen
8 comments
Information
Dear reader, to leave comments on the publication, you must sign in.