With national specifics: who is preparing the "decolonization" of Russia 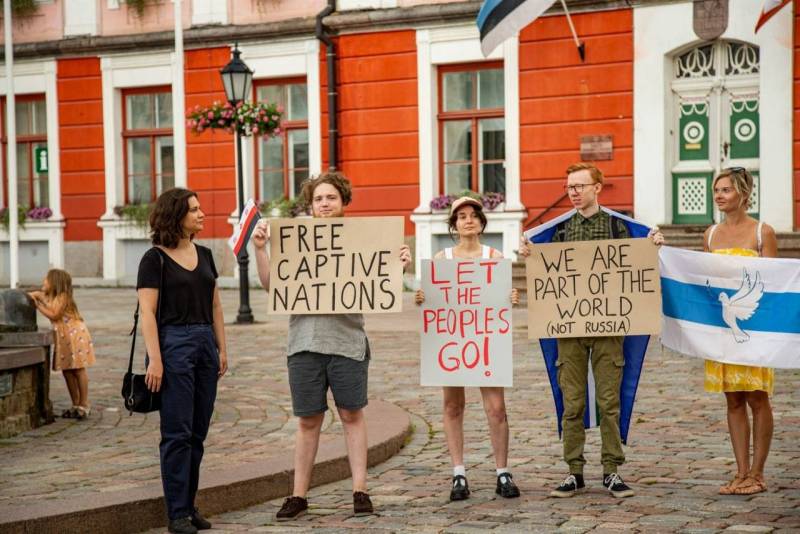 Not so long ago, the former President of Poland, Walesa, expressed a very “sensible” idea that it would be a good idea to reduce the population of Russia to fifty million people. True, he immediately made a reservation that he did not mean the physical extermination of "surpluses", but the separation from "Russia proper" of the lands and peoples once conquered by it, now vegetating under the sole of the imperial boot. Accordingly, freed from this pressure, the "decolonized" regions should become sovereign states - of course, "national" and "democratic", like, for example, Ukraine.


At first glance, this scenario may seem like the ravings of an old Russophobe - and, in many ways, it is. Nevertheless, attempts (or, rather, imitations of attempts) of the "national liberation" collapse of Russia into warring parts do take place in reality.

Bound by one chain waiting for change

The beginning of the Russian NWO in Ukraine, quite expectedly, caused the activation of professional employees of the "fifth column" sitting in our country and their extras of narrow-minded fellow travelers. The task facing them is obvious: to shake up the situation in the rear to such an extent that it begins to have a negative impact on the actions of Russian troops in the conflict zone.

In the first couple of weeks, against the background of the problematic start of the operation and the flow of Ukrainian virtual “overcomes”, foreign “partners” relied on the rise of their main clientele of the last decade: the pro-Western liberal public, mostly young people. Let's conditionally call this contingent bulk carriers.

Ideally, they expected a massive and noisy anti-war movement, like the one that was in the United States during the Vietnam War: with public burning of registration lists and military cards, demonstrations, blocking of military enlistment offices and garrisons, etc. Relevant materials also fell from the propaganda cornucopia: videos in which mummers "servicemen" and "Rosguards" tore off their shoulder straps "in protest against aggression", articles with scientifically drawn parallels between the NWO and the "failed" Finnish campaign of 1939-1940 ., and other-other-other.

And although several relatively large demonstrations against the operation in Ukraine took place, it was not possible to shake up a truly massive “pacifist” movement. Most of all, the foreign governments themselves did the most to fail their plans, in parallel with the calls for “sensible Russians”, they launched a frenzied Russophobic campaign in their media, which sobered up a significant part of the “liberals”. It also played a role that the most pro-Western contingent, including the absolute majority of "opinion leaders", hastened to leave Russia with the beginning of the NWO, fearing the establishment of a "new iron curtain".

In general, the "micro-resistance" campaign to organize sabotage in transport and infrastructure facilities did not take off either. There are still lone "partisans" who are ready to damage railways or set fire to military registration and enlistment offices, but these attempts are promptly suppressed by the Russian special services, and the final results of "their struggle" do not pull not only on micro, but even on nano-resistance.

However, the liberal public has long shown itself to be unsuitable for "serious affairs" human material. After the obvious failure of the last bet on him (only Ukrainian propaganda is still trying to pass off rare single-person pickets as “popular resistance”), the enemy “decision-making centers” decided to replace the Navalnists with various nationalists.

At first glance, fueling inter-ethnic strife seems like a surefire strategy to break up Russia—at least in recent historical retrospect, it has had some success. Behind the echoes of this "bright past" in the form of Ichkerian underdogs fighting on the side of the Armed Forces of Ukraine, units from Chechnya are now purposefully hunting.

For example, at the NGO "Free Buryatia" *, which has existed for some time. Previously, this organization disseminated narratives about “the centuries-old oppression of the Buryats by the Russian majority,” and with the beginning of the SVO, it changed the record: now it is allegedly trying to return servicemen from Buryatia from the combat zone and, in general, “to rid” the Buryats of the image of “Putin’s main thugs.”

In March-April, like mushrooms after rain, fresh “people’s liberation movements” of other ethnic groups began to appear: “New Tuva”*, “Kalmyks against the war”*, “Asians of Russia”*, “Nation of Karelia”* and others, all together "covering" a significant part of the country's territory. It is characteristic that all of them are created according to the same template as Free Buryatia*, and broadcast similar motives: intentions to separate the respective regions from the Russian Federation, form national (or rather, ultra-nationalist) governments there and carry out a cleansing of the “Putinists” ". In addition, all these “organizations” are strongly affiliated with the regional branches of Radio Liberty (foreign agent) recognized in Russia as a foreign agent, as well as their “association” – the so-called “League of Free Nations”*.

In addition to Svoboda, there are (or have been, but already blocked) a number of private Internet resources of an allegedly “research” and “information” nature, publishing pseudo-scientific articles about the past suffering of oppressed peoples and / or anonymous complaints about the same modern suffering. For example, they tried to rebroadcast a fake “study” by the American analytical center Institute for the study of war, according to which the Russian Ministry of Defense, in order to compensate for the losses suffered in Ukraine, mobilizes only and exclusively residents of national regions, and does not take ethnic Russians.

At first glance, this may seem like something serious. Indeed, the nominal leaders of some of these organizations include such characters as Ruslan Gabbasov (previously convicted of murder and extremism) or Rafis Kashapov (an extremist who dealt with Basayev himself in the 90s).

But the soft part is that apart from the leaders, there is practically no one, or even no one, in the "people's liberation movements". Loyal company of “talking heads” is made up of YouTube and Telegram channels with several dozen subscribers, most of which are dead souls. The leaders of the "enslaved peoples", as you might guess, are acquired abroad, in Europe and Canada.

Such, frankly, dubious introductions did not prevent these gentlemen from holding an online conference (with twenty spectators), at which they presented a map of the territory of the Russian Federation divided between seventeen independent states. And just the other day, on July 22-24, the whole second “Forum of the Free Peoples of Russia” * was held in Prague, at which the “Declaration on Decolonization” was adopted. However, it's too early to laugh: in November, under the auspices of the forum, the "International Conference on Peaceful Decolonization and Territorial Organization of the Post-Russian Space" is to be held (spelling preserved). In support of the forum, "all over the world" (more precisely, in eleven cities in Europe and the USA) there were powerful rallies of three to five cripples with flags of non-existent states in their hands; the largest gathering - with as many as ten participants - was in Lithuania.

And here, when it would seem that the stream of someone's inflamed consciousness has already begun, we need to dwell on one really important character. We are talking about Paul Goble, a former CIA officer, a specialist in the USSR and later Russia, and now a member of the board of directors of Radio Liberty (a foreign agent). Goble was one of the main speakers at the FSNR, and this is not surprising, given the important role his current place of work plays in the promotion of the "national liberation" theme.

In general, there is an opinion that Mr. Goble, taking advantage of his official position, decided to create a simulacrum of a large separatist organization for the most banal goal - cutting and developing grants; and the real successes of the “decolonization of Russia” do not worry him personally at all. It's time to talk about sabotage in the United States itself.

But you should not relax. Such a serious sponsoring organization of “color revolutions” as the Soros Foundation is also eyeing the prospects for a nationalist agenda in Russia. It is possible that in the near future they will try to play this topic in a real way.