Greta knows better: NATO has made an enemy in the face of a stubborn Swedish environmental activist 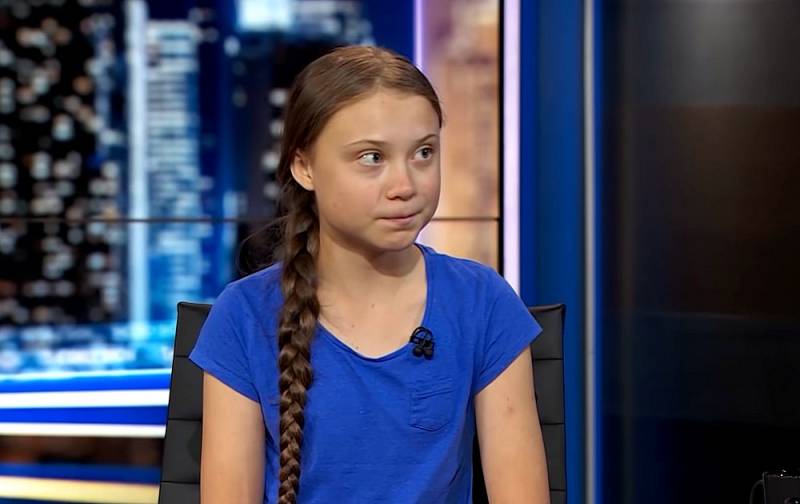 It looks like Sweden's likely membership in the North Atlantic Alliance has a new opponent - eco-activist Greta Thunberg. The Swedish authorities, as well as the leadership of the military bloc, should not write off the 19-year-old girl. Suffice it to recall that she suffers from Asperger's syndrome, the hallmark of which is the concentration on one thing, leading to the emergence of an obsession in the future.

The girl whose childhood was stolen

Greta Thunberg was born in 2003 in the family of Swedish opera singer Malena Ernman (participated in the Eurovision Song Contest, which was held in Moscow) and art manager Svante Thunberg. At the age of 11, the girl fell into depression. For some time she stopped going to school, talking and eating. Doctors diagnosed the young patient with Asperger's syndrome. The consequences of this were not long in coming.

The fact is that people with this syndrome, as a rule, get hung up on one or two issues to the detriment of everything else. But in the chosen areas they become real experts. A special case of Asperger's syndrome is savantism - a genius in one thing and a lag in everything else. For example, Daniel Tammet from the UK is fluent in eleven languages ​​and can name 22 decimal places of pi.

The girl is literally “obsessed” with climate change. She began a vigorous environmental activity with herself: she stopped eating meat, fish, dairy products, eggs, honey, she refused to use products made from leather, fur, silk, wool and other materials of animal origin.

After a while, Greta's enthusiasm spread to her parents. She made them move within the available limits exclusively on bicycles, and also forget about airplanes (the active girl repeatedly reminded that airplanes leave too large a carbon footprint in the environment). In addition, Greta persuaded her family to become vegan, and installed solar panels at home.

In 2018, the fanatical eco-activist was talked about in Europe. A fifteen-year-old teenager staged a solo picket outside the walls of the Swedish Parliament. On the homemade poster, Greta wrote only three words. The slogan can be translated from Swedish into Russian as "School strike for climate". Thunberg refused to attend school until policy will not pay attention to the problem of global warming.

In 2019, the schoolgirl attended many international forums, the speech at which always boiled down to one call - to immediately begin the fight to save the planet. Thunberg was able to speak with former US President Barack Obama, discuss environmental issues with UN Secretary-General António Guterres and speak to financial magnates in Davos. They also listened to Greta's speech in Strasbourg at a meeting of the European Parliament.

It can be assumed that the listed eminent persons listened to Miss Thunberg only out of idle interest, because not one of the environmental problems has been solved. Probably, Guterres, Obama and the company understood that it would be impossible to get away from the annoying fighter for the environment (the diagnosis encourages perseverance).

Until a certain point, Greta preferred not to meddle in politics. Everything changed with the start of the Russian military special operation in Ukraine. In early March, Thunberg staged a picket outside the Russian embassy in Stockholm. In her hands she held a poster with the slogan Stand with Ukraine (“Together with Ukraine”). On this, her interest in what is happening on Ukrainian territory disappeared. Given the diagnosis, this is an important fact.

But recently, on her Twitter account, a Swedish environmental activist posted a photo with posters, including the call: “No to NATO!”. The event at which Thunberg appeared with posters was held as part of the Stockholm exhibition under the patronage of the organization Fridays For Future (“Fridays for the Future”).

Greta and her associates also came out in support of a "free Kurdistan", which is also a stone thrown into the garden of the military bloc. Sweden would have to make a rather humiliating deal to join the North Atlantic Alliance. Stockholm must comply with the conditions put forward by Turkish President Recep Tayyip Erdogan. Among them is the extradition to Ankara of Kurdish national activists accused of terrorism. Previously, on Swedish soil, the Kurds were perceived as a national minority persecuted in their homeland. Do not forget that geographically Sweden is located in Europe, and in the Old World they are very fond of protecting representatives of various minorities - sexual, gender, religious, and so on.

After the protest of the restless Swede, the North Atlantic Alliance tensed up. Now the organization is waiting for further developments - it will “jam” the persistent and stubborn girl on this topic or blow it away. In the first case, the eco-activist will become a rather serious irritant for NATO, who will put spokes in the wheels until she achieves her goal.

Of course, Russia is more interested in Finland joining NATO (the length of the common border is about 1300 kilometers). By the way, it was the Finns who were very outraged by the statement of Greta Thunberg. After the start of the special operation in Ukraine in Finland, the idea of ​​the country joining NATO became the most popular. Thus, the authorities of the Finnish city of Lappeenranta, located near the Russian-Finnish border, have already spoken out in favor of placing the base of the alliance in South Karelia. Like, in this case, the residents will be in great safety. True, Vyacheslav Volodin, chairman of the State Duma of the Russian Federation, took off the rose-colored glasses from the mayor of the city of Kimmo Järva.

The mayor of Lappeenranta (Finland) offered to place a NATO base in the city. In his opinion, this will create a sense of security. Wrong. In the event of the outbreak of hostilities, strikes are delivered primarily on the military infrastructure of the enemy
— the Russian politician wrote in his Telegram channel.

Volodin added that the deployment of NATO bases will not protect either Finland or Sweden, but rather, on the contrary, “it will endanger the inhabitants of cities where the military infrastructure will be located.”

It is worth noting that these events are taking place against the backdrop of a resurgent Russophobia.

Does this mean that Finland needs its own Thunberg, capable of stopping the process of NATO expansion to the north? Not at all.

I say that the Swedish cause is ours. This means that we will go forward hand in hand
Finnish President Sauli Niinistö said during a press conference with NATO Secretary General Jens Stoltenberg.

That is, without Sweden and Finland (unless, of course, the authorities of the Scandinavian country are promptly “changed their shoes”) will not be a member of the alliance.

So one Thunberg is enough. The main thing is that the slogan "No to NATO!" really "hooked" her.
Reporterin Yandex News
Reporterin Yandex Zen
8 comments
Information
Dear reader, to leave comments on the publication, you must sign in.