In what direction is the world changing? 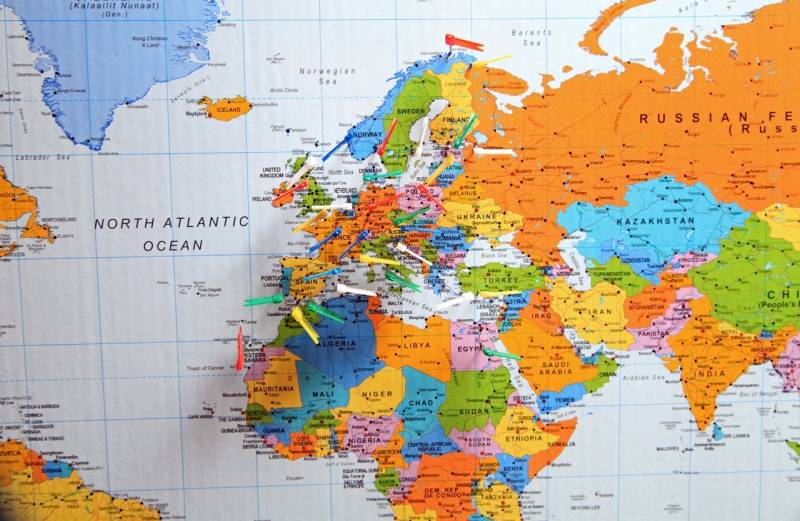 It is already clear that 2022 has marked the beginning of a new era in modern history. Many felt that the pandemic, in terms of scale and unprecedentedness, marked something fundamentally new in the format of the life of the whole world, there was talk about a global digital concentration camp and a behind-the-scenes conspiracy, but that was not the case. 2022 put an end to globalization, post-industrial the economy, green agenda, democracy and peaceful coexistence of the West, that is, the "golden billion", and the rest of the world.

Change of eras and a look into the past

There is a lot of discussion of the confrontation between the West and the Russian Federation, the beginning of a new US cold war against China, the struggle for sovereignty against Anglo-American and European hegemony, but all these are private aspects of a more global change of era, which is inexorably approaching through a chain of significant crises, conflicts and ideological breakdowns.

Today it is ridiculous to recall that glamorous-pink ideology of the worldview that was promoted in the 1990s and 2000s, when the chatter of Westerners about humanistic, democratic, market values ​​obscured in the information space many real political processes. When wars, conflicts, upheavals, crises seemed to be only insignificant moments in the general process of the progressive, technically more and more perfect development of mankind. When the indicators of GDP, stock indices and the prices of "brands" were presented as unambiguous success factors for developed countries, and industrial production was the lot of forever grimy catching up economies. When the concept of state sovereignty was forgotten and everyone talked about the greatness of transnational corporations and international institutions.

Perspicacious publicists already at that time drew the public's attention to the global economic crisis, the growth of polarization, the growing appetites of the American military-industrial complex, deindustrialization, and signs of the impending breakdown of neoliberal globalization. But they all received the stigma of marginal visionaries, because well-groomed politicians, managers, experts and pundits in expensive suits assured that everything in the world was developing as it should. All problems will be settled by the market and agreements “at the highest level”.

But a pandemic happened, people sat at home, involuntarily lost in thought, and after most restrictions were lifted, the world appeared in a completely different light. It turned out that no one needs globalization anymore, that Western civilization dominates not because of market freedom and iPhones, but because it rapes and robs the whole world, that the economy should be self-sufficient. The pandemic seemed to have paused in the pace of life, and this failure in the natural course of perception cleared the brains of the Fukuyamshchina veil.

Of course, this is not a pandemic per se. Everything that is now happening before our eyes is not just natural, but has been ripening for decades. Nevertheless, not a single state, not a single major political force, not a single scientific school turned out to be ready for the onset of a new era.

Now many theorists are in a panic looking for some parallels from the past, some clues to explain what is happening in general and where the world is heading. To a new world war? To complete isolation of regions, countries and "civilizations"? Or is it just a “spring exacerbation”, which will pass by itself and everything will return to normal?

Western analysts, experts and publicists are racing to accuse Russia and China of deliberately destroying a prosperous and prosperous system of world order, carefully built by the United States after the collapse of the USSR. “After all, five years ago everything was fine with us, why are you doing this to us?” - as if they complain, feeling with their subcortex that as before, there will never be.

Many observers and unwitting victims of the era of change are outraged by the collapse of their usual way of life: some cannot get another Louis Vuitton handbag, while others have shells exploding in the courtyards of their houses. The latter can be understood, but, unfortunately, big changes always involve big sacrifices. And most of the victims are people, usually innocent and small. Those who are to a greater extent responsible for choosing the former vector of human development have either rested in peace, or are already retired and plan to sit out in cozy country houses. And their successors stubbornly continue to push the world to the brink of the abyss. And the point is not so much the danger of nuclear war as the complete absence of prospects for resolving the accumulated contradictions.

It was often said in school lessons that an “irresolvable knot of contradictions” led to one or another sharp turn in history. This meant that the people who determine politics and economics did not pay attention to some problems for a long time, which eventually became unmanageable and swept away everything in its path like a snowball. Now such a point of view on the historical process is not in fashion, today it is customary to consider politics and economics exclusively through the subjective will of the rulers. Trump did this and that, Biden did this and that, Zelensky did or did not do something, Putin is generally to blame for everything. That is, the objective side of political and economic processes does not seem to exist at all, or it plays a secondary role.

But we still more or less sometimes glimpse at least some understanding of objective processes. In the West, complete solipsism reigns in the public consciousness. Trump shouted that, as soon as he became president, he would change America, make it "great again", turn the life of Americans around. And people really believed him, and he himself, it seems, believed in his promises. So what? Sat in the chair of the President of the United States, made America great? Has something fundamentally changed? Nothing. America, as it followed the chosen path, continues to go to a dead end, falling into the agony of a decaying empire. What were the internal problems and contradictions, such remained. In the textbooks of American history, Trump will be given three lines, like dozens of other leaders.

Objective signs of a passing era

So, the world order, which is being destroyed today, took shape after the collapse of the USSR. In the 1990s, the United States remained the only superpower, the world market was turned into a space for the circulation of the dollar, the Western-style capitalist system (market + democracy) became the standard of civilization. Even socialist China vigorously introduced market relations, surpassing the old democratic powers in some aspects of liberalism. Therefore, the outgoing era is characterized by a decline in the role of the state, rampant big capital and, as a result, the fierce dictatorship of Western monopolies. Where natural resources lay poorly, American aircraft carrier groups, strike aviation units and fur seals rushed. Where local politicians showed obstinacy, American political technologists, human rights activists rushed, and extensive networks of agents were activated. In all local countries, the local oligarchy of various calibers ruled the ball. That is, something like the American model of society was taking shape.

The formula of the era is that American bigwigs suck the maximum wealth out of humanity, local "effective managers" collect crumbs from the table. All this was called with beautiful words "globalization" and "neoliberalism", but in fact it was the realization of Hitler's dreams of world domination.

Even then, some even the most odious supporters of the United States warned that such a configuration of the world economy and international politics could not exist for a long time, imbalances and contradictions were growing, the poor were getting poorer, the rich were getting richer, weak countries were increasingly thinking about their lack of sovereignty.

The growth of China and the strengthening of the Russian economy and politics, ensured by the increasing role of the state, gradually became points of irritation for the United States. And when the American economy began to lose to the Chinese economy under its own liberal rules and with dollar hegemony, all the rot of the system climbed out. Whether the reasons for the weakening of the United States were internal or external competition exerted such pressure is unclear. Here, as in school, there is a “knot of contradictions” - everything gradually played its role. American hegemony hit bottom when it had to flee from the Taliban in Baghdad. After that, the ruling circles of the United States set a course for a sharp aggravation of foreign policy, for unleashing conflicts and aggression. The military-political leadership of the United States has fallen into a mental frenzy, characteristic of the leaders of states, from whose hands world domination is slipping away.

Objective signs of the coming era

In 2022, everything has changed fundamentally. Let some other mechanisms have not had time to rebuild, but this is a matter of two or three years. The world has suddenly become black and white - there is the United States and its concept of American hegemony, and there are others who do not agree with them. No more compromises and concessions, only aggravation and confrontation. "He who is not with us is against us." Only Papua New Guinea will be able to sit on the sidelines, because no one cares about it.

All the old "normalities" like free speech, sacred private property rights, human rights are gone. The “good old” era of the right of the strong has come. No amount of liberalism and expansive humanism solves anything anymore. Everything will be mobilized and rebuilt for a crusade against "Chinese communism" and "Russian authoritarianism". Ideologically, everything will be filled with Sinophobia and Russophobia. We are waiting for a repetition of McCarthyism, only if the old McCarthyism came to naught due to the death of Stalin and the coming to power of Khrushchev, who seemed to the Americans an acceptable figure, the new McCarthyism promises to be long, since neither China nor Russia will change course in the coming years.

In the West, everything is already being turned upside down, they say that it is the Chinese and Russians who are the aggressors and destroyers. Although in fact China and Russia have not changed their policies, they consistently take a defensive position, trying to survive in the face of growing pressure. Yes, the Russian Federation launched a special operation in Ukraine, but this is a purely tactical initiative, the United States would still unleash an armed conflict under one sauce or another.

And most importantly: what are the economic signs of a new era? A complete merging of the state and capital in this or that balancing act, because preparations are underway for a world war. This does not mean that such a war is inevitable or that a thermonuclear apocalypse awaits us, the matter is different. For some, in the West, the accumulation of all resources in the hands of the state and monopolies is beneficial to the largest magnates, who, under the guise of an economic crisis, will strangle all competitors and rip off the population as much as possible. But even without this, it is impossible to continue an aggressive attempt to maintain world hegemony. For others, it's the only way to survive. China, Russia and some other countries under pressure from the West are acting largely out of unavoidable necessity. They are not left with much choice: either mobilize or hand over the country to be torn to pieces. The State Department brainchild Forum of Free Peoples has already drawn a map of the “decolonization of Russia” with its transformation into 34 “independent states”, and Walesa calculated that less than 50 million people will remain in the new Russia.
Reporterin Yandex News
Reporterin Yandex Zen
12 comments
Information
Dear reader, to leave comments on the publication, you must sign in.