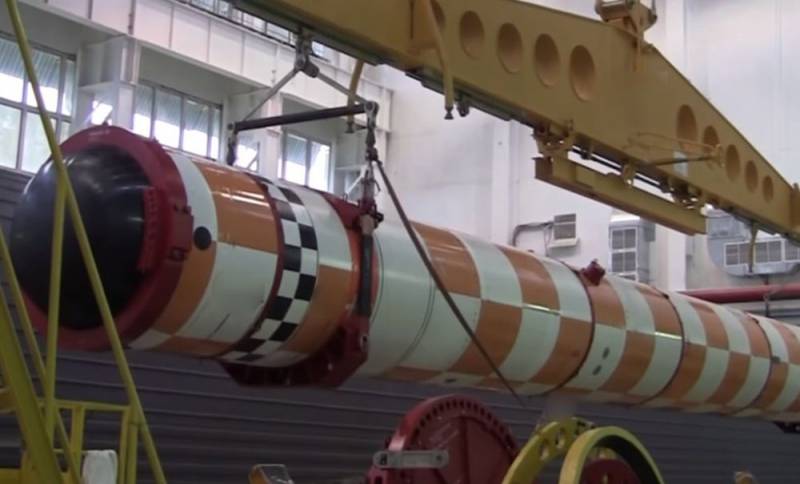 Chinese scientists intend to create an inexpensive reduced and simplified copy (analogue) of the Poseidon nuclear super-torpedo, developed by their colleagues from Russia, which can cross the Pacific Ocean in a week. This was written by Stephen Chen in his article for the oldest English-language newspaper in Hong Kong South China Morning Post.


According to experts from China, the range of the submarine's nuclear reactor will be 10 km (6,2 nautical miles), roughly the distance from Shanghai to San Francisco. It will be possible to produce a torpedo in large quantities and launch whole “shoals” (“swarms”, “flocks”) at the enemy from almost any submarine or ship of the Chinese Navy. A Beijing-based research team has reported that it has already completed a concept design for a lightweight mini-version of the Poseidon, the world's first nuclear-powered underwater drone.

But unlike the Poseidon, which can't be mass-produced because it's too big, expensive, and destructive, a mini version can fit into a standard torpedo tube. Each torpedo will use a disposable nuclear reactor to reach and maintain a cruising speed of over 30 knots (56 km/h) for 200 hours before dropping the reactor to the seafloor (activating a safety mechanism to stop the remaining chain reaction) and being powered by a battery to attack with conventional weapons
- explained the experts.

Leading scientist Guo Jian of the China Institute of Atomic Energy said in an article published this month by the peer-reviewed journal of unmanned underwater systems run by the China Shipbuilding Industry Corporation, China's largest naval contractor, that there is a fundamental difference between the mini version and the Poseidon. .

Due to its high flexibility and low cost, this nuclear-powered unmanned submersible can be used as a conventional and strike nuclear submarine, rather than as a nuclear missile.
He pointed out.

Poseidon's two-megaton nuclear warhead - 100 times more powerful than the bomb dropped on Hiroshima by the Americans - could destroy a coastal city or a large area, according to Russian media reports. But in China, they believe that the use of such weapons could lead to a nuclear apocalypse, which makes building a large number of such torpedoes unlikely. According to them, Poseidon is an exclusively strategic weapon.

There is a growing demand in China for small, high-speed, long-range underwater drones that can be used for reconnaissance, tracking, attack and strategic strikes.
Go emphasized.

He pointed out that in order to create a new nuclear energy system with a mature and simple by technology, easy to use and maintain, inexpensive and suitable for mass production - you need to think outside the box. Therefore, the project team removed most of the shielding materials from the reactor, shielding only a few critical components from radiation. They also replaced expensive rare earth coatings inside the reactor core with cheap materials like graphite.

To further reduce the cost, they suggest using some components commercially available on the international market instead of military products. A reactor that weighs two average adult men in China would generate more than 1,4 megawatts of heat using less than 4 kg of low concentration uranium fuel. Guo estimates that only about 6% of the heat generated will be converted into electricity to propel the torpedo due to the low efficiency of cheap components, but the energy will be more than enough for a one-way mission.

When the cost of production is low enough, even if a nuclear device can only be used once, the overall cost will be low. This, in turn, encourages us to make the system simpler and smaller.
the researchers say.

They explained that maintenance personnel would be able to handle the mini-reactor as a "clean asset" without the need for protective gear, as it would not produce radioactivity once manufactured. The chain reaction will begin when the torpedo leaves the launch platform, and it will take about half an hour - 20 times faster than a typical nuclear submarine reactor - to reach an operating temperature of 300 ° C and accelerate the torpedo to cruising speed.

Even if the reactor pressure vessel breaks during the drop and its interior is flooded with water or covered with sand on the seabed, a critical accident will not occur. Security provided
they assure.

Scientist Ma Liang of the Naval Submarine Academy in Qingdao, Shandong Province, said "smart" torpedoes that fire in large groups will play an important role in the naval battles of the future. Artificial intelligence technologies such as machine learning will allow torpedoes to select and attack targets with little or no human intervention, he said in a separate article published in the same journal on July 13. “Smart” torpedoes will be able to ambush on the other side of the ocean, “strike enemy submarines when they leave port in their waters, which are difficult to reach from manned platforms, and perform a wide range of other tasks,” the author summed up.
Reporterin Yandex News
Reporterin Yandex Zen
4 comments
Information
Dear reader, to leave comments on the publication, you must sign in.